What is this military patch with the silhouette of a pegasus on it?

I found this patch among my grandfather's things. I know it's a military patch of some sort because it was with his war memorabilia. He served in the European theater during WWII, if that helps at all. Can someone identify this unit patch? 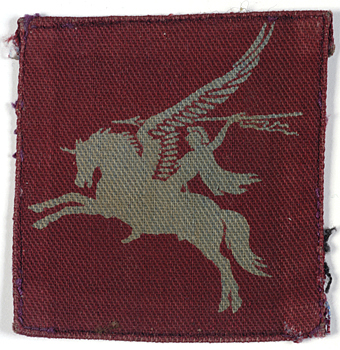 The 44th Indian Airborne Division also adopted a similar patch with the word 'INDIAN' underneath the design.

The artwork for the patch was created by Edward Seago.

The British Parachute regiment's mascot was a Shetland pony named Pegasus IV and the official magazine of the British Airborne forces is the "Pegasus":

Not the answer you're looking for? Browse other questions tagged 20th-century world-war-two military identification or ask your own question.

7
What would the Royal Sussex Regiment have been doing in South Africa between 1900-1902?
5
What kind of uniform is this?
9
Understanding my 96 year old father's US Army discharge papers
4
Can anyone help identify this French military uniform?
14
What ring is this?
3
Can anyone help me identify my grandfather's uniform?
4
Could someone help to identify this Japanese mon found on what appears to be a late Edo Period Jingasa?
0
What time period is this uniform?
3
Can you help identify this European military uniform?