I was looking back at my grandmother's voyage to America, she made the trip from Zbaraz in the Ukraine through Warsaw and then on to Gdanks and through steerage class to the New York. I know she took a specific route through Poland and to Gdansk but not how, that was something we never documented. It made me wonder how emigres from the region might have travelled across Eastern Europe and to ports like Gdansk in the early 20th Century (for my grandmother this was about 1917), were train lines available as transportation and affordable to emigres? Would they have walked? Horse and buggy/cart/wagon or some other means? I'm only concerned for Eastern Europe at this point, but if anyone has ideas for how travel might have gone in the region I'd be curious to know.

My own knowledge of the region and time makes me think most would have travelled north or maybe east, going south the Ottoman Empire or the Black Sea doesn't seem like the best method to emigrate to the US. Northern sea ports on the North Sea seemed to have the routes to New York and the US more settled than others, but I am not sure if there were ports east of Italy that might have been used (although there probably are and I am unaware of them.)

edit: Originally I erred and noted Warsaw as the port when it should have been Gdansk, sorry about that!

Warsaw is not a port. It is in the middle of the "country" (the earlier version of Poland, not today's), which is why it was chosen as the capital.

Warsaw was also something of a rail hub, as far as was the case in Eastern Europe in those days. The easiest way to get to a port such as Gdansk, on the Baltic, was by rail from Warsaw. A few other cities in eastern Europe (Kiev, Minsk, etc.) were also connected to Warsaw by rail. Otherwise, people took more "primitive" forms of transportation (e.g. wagons) to Warsaw, and from there, to Gdansk.

Few people went from modern Poland to Italy (a different country). Early in the 20th century, most of Poland, along with most countries of the former Soviet Union, was part of Russia, with Poland being the westernmost of these countries. Hence, people from the modern Belarus and northern Ukraine might head west for Warsaw, and from there to Gdansk and abroad.

The city that I called Gdansk, which is now part of Poland, was the German city of Danzig in 1917. At that time, there was no "Poland," only Polish land and cities divided between Germany, Russia, and Austria-Hungary, following the three "partitions" of the country in the 18th century. Gdansk, where more people spoke Polish than the cities in the next sentence, would have been the most logical port for someone from Poland, or even the Ukraine who spoke Polish. Salonika, Venice, Hamburg, or Amsterdam would have been much harder transit points for speakers of Slavic languages. Someone from the south (as opposed to north) Ukraine might have preferred Odessa, a Russian port on the Black Sea.

There may be a reason why your grandmother made the trip in 1917, and not some other year. That was when Germany had conquered not only Poland, but the western Ukraine from Russia, meaning that one country controlled the whole route your grandmother traveled (Ukraine, Warsaw, Gdansk). I can't imagine her making a trip across the (Russo-German) border earlier in the war. Such a trip would have been possible, but difficult, before the war.

During Partitions of Poland, Zbaraz was a part of Austro-Hungarian Empire and there weren't good railway connections between Galician towns and those at Russian side, also because of different breadth of rails.

This way I believe your grandmother could use the railway connection between Tarnopol and Krakow, which was part of Galician Railway of Archduke Charles Louis. And from there she could take another train going through Kielce to Warsaw, as from what I know, that was the easiest way.

You can see the possible route on the linked map, which shows the state of connections in 1897. Here's its smaller version: 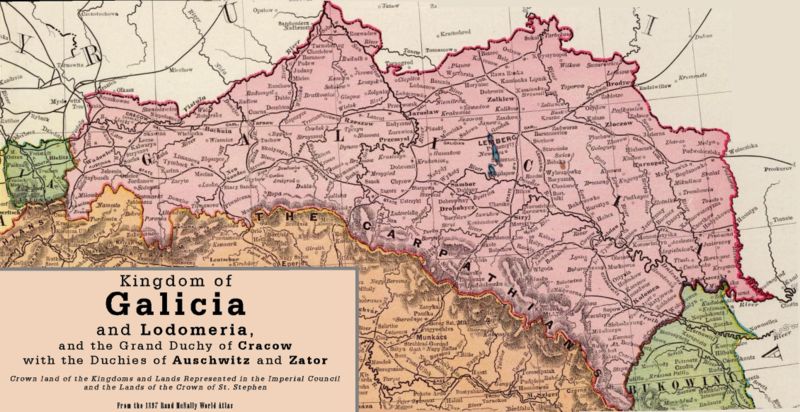 As for the next part, between Warsaw and Gdansk, this map of German railways in 1899 can provide some details: 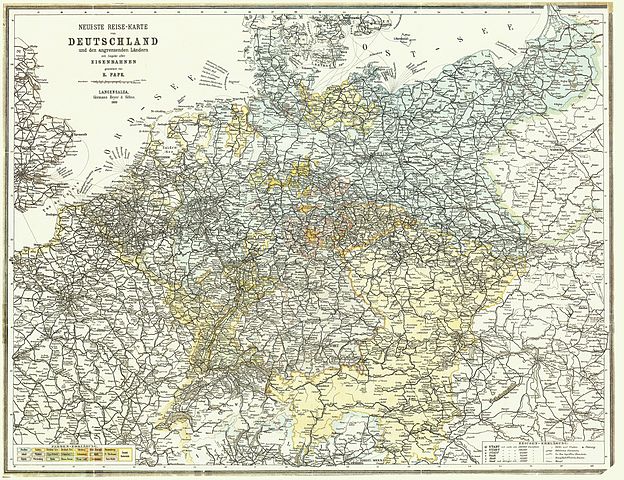 The main differences that could change the possible way after 1899 were the development of Russian railways in the first decade of 20th century and the overall development and changes in railways during the World War I.

Still, take in mind that when the war finished, there were only a few rail connections between areas of Poland that were previously parts of different empires. So it was much easier to go by train from Polish town to another country than to another Polish town.

It's possible that she didn't take the train from Warsaw, as many Polish peasants who tried to emigrate were crossing the border illegally, paying the bribe, which was was much easier on smaller routes. With the help of Google you can translate this post from Polish genealogy board speaking about Polish emigration to USA in the end of 19th century, which covers this subject among others.

Of course it could look pretty different in the times of World War I.

Also are you sure about Gdansk? Because at the same article it's written that at the end of 19th century the main ports from which Poles were leaving to USA were Bremen, Antwerp and Hamburg.

EDIT: I've found the following map, showing ports from which emigrants from another Galician town, Świlcza, were coming to New York between 1897 and 1924. As we can see, there's also Gdansk on the list, even if the numbers show it was much less popular option.

More details at the linked website in Polish language. 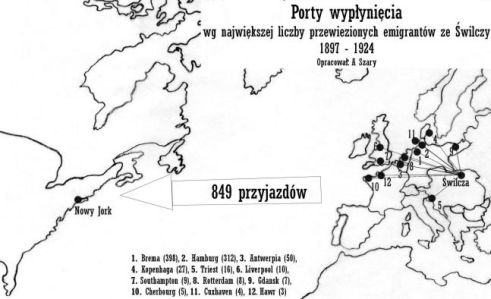 You should also read another website, containing local press articles in which Galician citizens write about their road to USA. The first one (1902) was written by journalist who focuses on the ship itself, but the more interesting is the second relation (1903), describing how emigrants from Galicia were treated in Germany on their way in trains and in the ports.

And a third press article, from 1890, describing relations from the port in Bremen, how Polish emigrants were treated. I suppose it would be similar in Gdansk.

And finally the book by Martin Pollack, "Caesar of America", describing Galician emigration to USA before 1918. Originally it's in German, it was translated to Polish and it's possible that to English too.

At the end of the movie Fiddler on the Roof, the Russian Jews are shown leaving in a train of wagons. I always pictured a wagon trail running West, much like in the USA in the 1800's (but in much less happy circumstances of course).

Its just a movie of course. Hollywood movies aren't exactly renowned for historical scholarship. However, it was made in 1971 with the involvement of quite a few Jewish folks who would have most likely had access to older relatives who had made this exact journey.

For southern Eastern Europe, the main port would have to be Salonika. From there (and other Balkan and eastern Mediterranean ports), there would have been few direct sailings to North America, but shipping could used a hub system like today's airlines do, but sailing to major centres.

Anecdotal evidence points to Marseille as serving as a staging point for emigrants travelling from the east to North and South America.

Not the answer you're looking for? Browse other questions tagged 20th-century europe poland immigration or ask your own question.

12
What was the official language used across European monarchies in the XII century?
8
Eastern and Southern Europe in the medieval time period?
15
How common was it for un-documented ships to bring settlers to the American colonies 1700-1750
19
How have European microstates survived?
2
Why the Black Death took longer to appear in Eastern Europe than in Western Europe
10
What plane would have been used to airdrop someone into occupied Europe?
1
How long would it have taken to get to the Poconos in the early 1900s?
19
Have Germans expelled from Eastern Europe been re-enfranchised?
4
Why do Eastern European countries have the greatest female-to-male ratio?