What language(s) were spoken within the Holy Roman Empire?

The Holy Roman Empire (of the German Nations) was a multi-ethnic, multi-cultural, and multi-lingual coalition from its (unofficial) founding by Charlemagne in the 9th century AD. The German Empire would be a better term in fact, as it was founded and typically ruled by Germanic peoples. (Charlemagne himself was a Frank.) As Voltaire once perceptively quipped, the Holy Roman Empire was "neither holy, nor Roman, nor an empire". (Essai sur l'histoire générale et sur les mœurs et l'esprit des nations, Chapter 70)

Given that the boundaries of the empire were constantly changing over its almost thousand-year history (and were rarely if ever officially defined), the cultures and languages subsumed were constantly in flux too. Undoubtedly, German (or the predominant dialect thereof) was the de-facto official language. Latin was also for official matters of state/ceremonies, especially during the Medieval period, given this modern empire's desire to ape the glory of Ancient Rome, not to mention the ubiquity of the Church in Medieval life.

A map of the Holy Roman territories cerca 1600 hints well at what languages were commonly spoken by the populace in various regions. 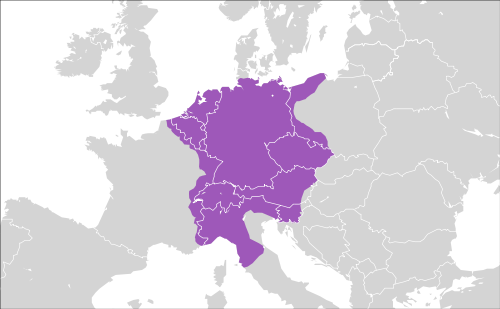 These would have included the following:

Undoubtedly I have missed out a few, but the above list should cover the predominant languages within the (stable) boundaries of the Holy Roman Empire, noting where appropiate the diversity of dialects of some languages that was extremely prevalent during the medieval and early modern periods of history.

Medieval Latin (an evolution of the Classical Latin of Ancient Rome) was indeed the official language of the Holy Roman Empire for most of its history. It was in fact only changed to Standard German during the reign of Joseph II (late 18th century.) What is interesting to note, especially in the High Medieval period where the Holy Roman Empire encompassed much land and many cultures, is that Medieval Latin was the only common language between the educated (especially ecclesiastical) folk in all of its member states. It was perhaps the second great period in which Latin was the "Lingua Franca" of its day, supplanted by Standard German (even in regions such as Slavic Bohemia) by the Early Modern period.

Please feel free to add/improve on references, especially secondary ones. Some of the information in this post is admittedly from old history lessons of mine/sources I have forgotten.

Mainly German, but a lot of literature wasn't vernacular (in your language) until after the printing press, so Latin was used to read books (if you were educated). Italian was also used in the southern part of the HRE.

(Pulled from A History of Western Society by John McKay)

In a decree called the Golden Bull of 1356, which set the election system of the Holy Roman Emperor, it was specified that the elector's sons should speak the three imperial languages - German, Italian and Czech.

Given the southward spread, Slovenian was likely spoken within the Empire as well. Also Romansch, the fourth language of Switzerland. Not sure how much Polish was spoken; though the Empire overlaps modern Poland, remember that Poland was forcibly moved 300 miles to the west by the Soviets. The northern overlap is Brandenburg/Prussia, which would have been mostly German speaking at the time; the southern overlap is Silesia, with probably did have Polish speakers. And, of course, speakers of Yiddish and Romany would have existed throughout the region.

I'm unable to find a reference to an official language of the empire, but according to Wikipedia, the languages that would have been spoken within its borders were numerous, and would include the following:

As for which one would have been the language of business, I would say Latin during its inception and pre-Renaissance existence, the Germanic languages as the independent states of the era came into their own during the latter half of the empire time, and Italian as well during that time, but fading as Italian influence waned during the last two hundred or so years.

The primary language that united all the principalities, provinces and larger states within the Holy Roman Emperor was Latin. The widespread use of Latin was within the Ecclesiastical communities of Roman Catholic Western and Northern Europe. From the local Parish Priest, to the Pope himself, Latin, was the central language of the European Middle Ages.

However, Latin was still an academically and theologically oriented language within the Holy Roman Empire and was not necessarily the conversational or everyday language of villagers and townsfolk. If, for example, someone was walking through a town square in France, Germany or Belgium 1000 years ago, one would not have bought and sold products by using Latin, but instead, he or she would have used the indigenous languages of the various countries that were part of the larger Holy Roman Empire.

Here is a list of SOME of the more widely spoken conversational languages within the Holy Roman Empire:

The majority of the listed languages are Germanic languages-(that is to say, languages which originated in Germany, as well as greater Germany), though some are Romance, as well as Slavic-(specifically, North Slavic languages, though not including Russian).

The combination of the Latin theological and academic language,coupled with the everyday conversational use of various indigenous languages throughout much of Northern and Western Europe would have been the linguistic map and history of this part of the world 600-1200 years ago.

The HRE (Holy Roman Empire) was a multi-cultural and multi-lingual but German was the official language. Other languages that were spoken would be Latin, Italian, Czech, Polish, Dutch, French, Frisian, Slovene, Sorbian and others. Latin was used in books if you were educated and Italian also used in the southern part of the HRE.

Not the answer you're looking for? Browse other questions tagged holy-roman-empire language or ask your own question.