How did people deal with ice on the roads during the horse-and-buggy era?

Before there were cars, people traveled in a horse-drawn carriage, sometimes over cobble-stone covered roads.

Back in those days, was anything done to keep the traveled roads free from ice or snow? Were accidents due to ice or snow relatively uncommon?

Snow removal takes a lot of effort. It was easier to switch out wheeled carriages for sleighs. Sleighs work better with more snow, so that according to this article:

in the 18th and 19th centuries, "snow was never a threat" to road travel, "but rather it was an asset."

The more densely packed snow became, the better. Some municipalities even had special "snow rollers" to compress the snow: 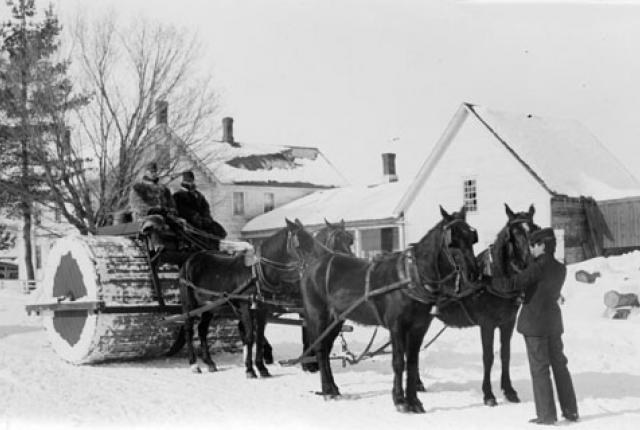 Some inventors did try out horse-drawn plows, but these were intended for pedestrian alleys, not thoroughfares. In the U.S., these were most popular in the "snow belt," with Milwaukee being the first major city to use one in 1862. However, horse-drawn snowplows are not able to handle blizzards, as the Blizzard of 1888 (which dropped 50 inches of snow on the East Coast) made clear:

The plow-pulling horses, like everyone else, had no choice but to stay inside and wait for the snow to melt. Cities in the region learned a valuable lesson about preparation, and the following year many implemented measures like hiring more plows and giving them assigned routes, and sending the plows out to start clearing the roads in the early stages of the storm.

It was the introduction of automobiles that required cities to take snow removal seriously:

As automobiles replaced horses and carriages on the roads of the U.S., the snow problem got flipped on its head. It wouldn't be enough to clear the alleys and pack down the snow on the main roads anymore. Cars required dry, safe streets. Motorized salt spreaders were introduced, but they often didn't do enough, and urban sprawl meant most cities were just too big for horse-drawn plows to clean all the streets. In the early 1920s, Norwegian brothers Hans and Even Overaasen and New Yorker Carl Frink independently came up with designs for car-mounted snow plows. These were, apparenty the perfect solution to the modern snow problem, and the company Frink started is still producing plows today.

I am a regular stackexchange user but never in the history boards before. This post caught my eye.

My Great Grandmother lived as a pioneer homesteader/farmer in Klamath Falls, Oregon. Her father died when she was very young, and her older brother badly injured his knee on a nail that worked itself loose on a horse drawn sleigh. He moved into the city to work because he could no longer work the farm because of his leg becoming inflexible and weak. My Great Grandmother took over the farm work at age 13. She was a tough old bird I tell you. They had a team of two Clydesdale horses which she would harness by herself while standing on a stool and go and do the work about the farm. I remember very well her telling me about working the horses in the snow and using studded medal shoes, and a type of snow shoe for deeper snow if necessary. Sleighs were a huge advantage actually, as much greater weights could be moved than on a wheeled wagon. Hauling firewood, for example, was much faster when the snows came, because nearly twice the weights could be easily moved on the sleighs.

@twoshedas answer, currently the accepted one, mentions just one approach but there were others. For example, in Montreal, Canada, large shafts that lead from the street level down to the sewers were used by city workers to push snow off the street and out of sight.

A 19th century snow-dump shaft at the beginning stages of the Cote St. Paul collector. 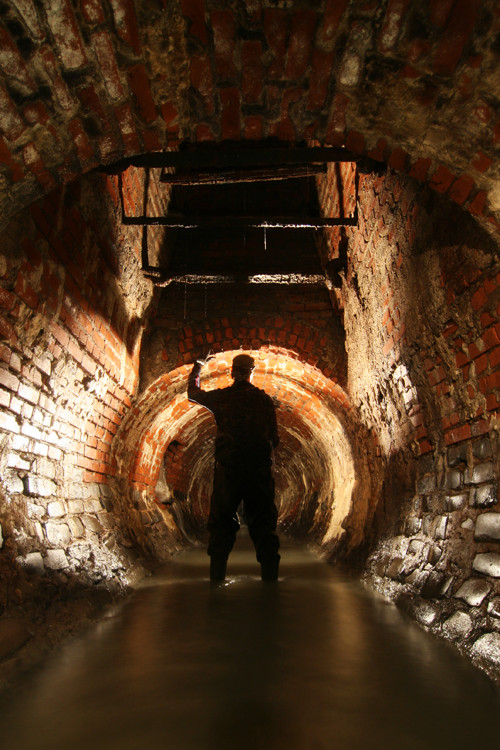 In addition, an exhibit from the McCord Museum of Montreal, assembled a collection of snow-removal photographs from that era. Here's one, but be sure to check more out via the link.

This photograph shows a Montreal street (rue Notre-Dame) in winter. The street is full of snow and a crowd of people is busy clearing it. We can see that some people are using shovels and even pickaxes to transfer the snow into sorts of sleds pulled by horses. We can also see that Notre-Dame was also a very busy street since quite a few people are walking along it. The snow is trampled and dirty and piled up to the right. 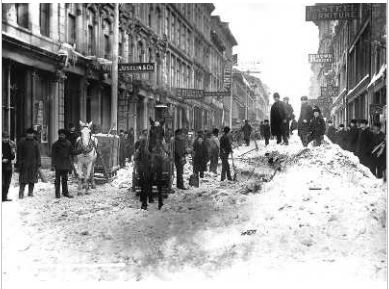 Not the answer you're looking for? Browse other questions tagged 19th-century everyday-life transportation or ask your own question.

11
How did the Romans build straight roads that stretched very long distances?
23
How did people have access to ice in warm areas before the industrial revolution?
11
How did people cut their nails in the past?
7
During the Middle Ages, how many people could be fed by fishing?
51
How did people wash dishes before dish detergent?
17
How did people say “I have to go to the bathroom” before the bathroom and pipes were common?
12
When did the last (non-tourist) commercial stagecoach line run in the USA?
3
Why did wagons in the frontier era travel at night?
11
How did they measure speed in the 19th century so they could issue the first speeding ticket?