Why did Japanese samurai disembowel themselves?

Japanese samurais were known to commit ritual suicide by stabbing themselves in the belly. Why? Why not hang themselves? Cut their own throats? Does Japanese culture view disembowelment differently from other deaths?

Maybe hanging is too much trouble to do in a battle, but samurais kill themselves in peace time too, and its always by disemboweling. So military convenience cant be the whole story.

The usual explanation is that Japanese culture believed the soul resides in the abdomen. Since the ritual of seppuku or harakiri is usually meant to provide an honourable death, cutting open the abdomen was an act that "bares the soul", so to speak.

The Meiji educator Dr. Nitobe Inazō wrote in his famous Bushido: the Soul of Japan that:

[T]he choice of this particular part of the body to operate upon, was based on an old anatomical belief as to the seat of the soul and of the affections ... the belief prevalent among the Japanese [is] that in the abdomen was enshrined the soul. This view of mental physiology once admitted, the syllogism of seppuku is easy to construct. "I will open the seat of my soul and show you how it fares with it. See for yourself whether it is polluted or clean."

This is somewhat of an idealisation since disembowelment was, originally, just one of several methods for committing suicide. Many great warriors, such as Kusunoki Masashige, killed themselves in other ways and were no less venerated for it. At these older times, harakiri was mostly a way for warriors to go down fighting. No special honour or deeper meaning was attached.

However, death by disembowelment is an excruciatingly drawn out process. Thus, warriors who chose to die in this less than optimal this manner win awe and respect from their peers. The romanticisation of such deaths as dramatic display of bravery and determination elevated this method of suicide above other, less painful ways, to die.

The combination of "baring the soul" through abdominal dissection, and the admiration of those who die in this manner, led seppuku to really become fashionable around the late Sengoku Era. This followed a long migration of the practice away from the confines of battlefield. One example is the suicide of Shimizu Muneharu, who killed himself to spare the lives of his soldiers during a siege. This sacrifice won him great praise from both friends and foes alike.

Although pain was a large part of how the ritual originated, I think the larger reason that later samurai chose seppuku really comes down to it being the expected and proper way to die. By their time the practice of kaishaku had developed. This shortens the victim's suffering by having a friend cut off his head (women did not typically practice harakiri, though it is not totally unheard of) once the main act of cutting was completed. If pain was the goal everyone had in mind, there wouldn't be such measures to minimise it.

In other words, seppuku was a social expectation that had developed over centuries.

The reason is that it mimics the way you would kill someone else most efficiently. The other answer saying disembowlment is "drawn out process" is true, but you don't disembowel them. Seppuku is not disembowlment. To explain...

First of all, the fastest way to kill someone easily with a sword is by slicing through the solar plexus. A large artery, called the abdominal aorta, runs longitudinally through the solar plexus. Severing this artery will cause a large decrease in blood pressure and put the person into shock almost immediately. Also, the solar plexus is a nervous junction. Severing it will generally cause an instant paralysis. Finally, just beyond the solar plexus is the diaphram, so at the same time you can flood the diaphram with blood, preventing any further breathing. In general, a cut of this type will instantly incapacitate the person (which is what is wanted) and they will be unconscious within less than 30 seconds usually, and completely dead within 5 minutes. Killing in this way is a much easier stroke than a decapitation (the next best option), and can be done at longer range.

Proper seppuku simply imitates this stroke. It is difficult to do because once the bushi cuts into the solar plexus he will become instantly incapacitated. For this reason the cut must be instantaneous and decisive. Any hesitation whatsoever will cause a failure.

Because of the difficulty of making this cut properly, often a less experienced warrior would cut at the navel below the solar plexus, more of a "disembowlment", however as long as the bushi severs the abdominal aorta, death will follow rapidly. The purpose of simultaneous decapitation by an aide is to prevent the bushi from involuntarily crying out--a dishonor. The aide must cut off the head at the exact instant the cut is made, otherwise the bushi may make a sound.

Below is illustrated the two possible cuts, the upper one being the correct and proper one, although more difficult to execute. 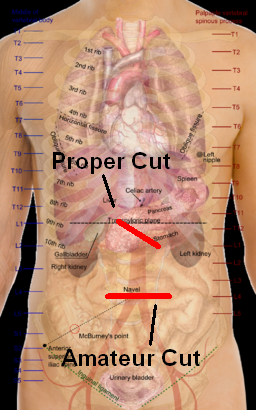 Note that the proper cut is quite near the ribs, so the bushi must be very quick, accurate and decisive to do it correctly and not touch the ribs. When delivering the same stroke to an opponent, it is much easier; the warrior just slashes upwards through the center of the body in a diagonal fashion as shown using the last three inches of the blade; this can be done on a draw, meaning by simply drawing the katana from its scabbard (the saya) in the right way.

When committing seppuku, the bushi uses only the last three inches of the Wakizashi, holding it by the blade. A square of paper is wrapped around the blade so that the bushi can hold it without cutting himself.

When a woman or child was required to commit seppuku, they would make no cut at all. Instead, the folded Wakizashi paper (or a closed fan) would be held in the right hand and then touched to the stomach. As soon as the condemned touched the paper to their stomach, their squire (or the executioner, depending on the situation) would decollate them.

In addition to the soul is in the bowels explanation, I read recently that the reason they chose a painful easy to die is to punish themselves. So a samurai who had committed a capital offense was going to die, but by choosing a painful method of dying he is giving himself additional punishment to earn forgiveness.

This may not apply to all seppuku cases, but it makes sense in cases when it is used as a punishment for mistakes or failures.

Not the answer you're looking for? Browse other questions tagged japan cultural-history death samurai medieval-japan or ask your own question.

15
How many Samurai killed themselves?
12
Could rōnin become a samurai again?
35
Why didn't Japanese infantrymen and samurai use shields?
6
What is the meaning of this samurai crest?
9
What does this Samurai crest mean?
6
How accurate is the fatalistic samurai culture in James Clavell's novel Shogun?
0
Can someone give me the history on this Japanese Crest symbol