Upon reading Putin’s New Nostalgia article by Timothy Snyder, I was specifically intrigued by one particular historical point he mentioned. Given the charged nature of current events, and Snyder’s apparent bias, I had found a lot of his statements suspicious (some of which were hard to verify, or they did not warrant unequivocal language he chose to use, etc.). But one of them, I thought, would be easy to confirm by available historical record as it concerned official propaganda around the time of Molotov-Ribbentrop :

Between 1939 and 1941, the Soviet Union presented Nazi Germany in its own internal propaganda as a friendly state, ceased to criticize German policies, and began to publish Nazi speeches. People at public rallies occasionally misspoke, praising “Comrade Hitler” or calling for “the triumph of international fascism.” Swastikas began to appear on buildings or even on posters of Soviet leaders.

Some of it seemed far-fetched to me. Now, I would completely understand the desire by the Soviet government to present positively the trade and economic cooperation agreements with the state that was deemed previously hostile (given the Nazi destruction of political left and labour movement in the mid-1930s). However, the complete turn-about in propaganda to a full-blown support of Nazi regime did not appear likely.

Reckoning it would be easy to find relevant posters, I started to search for swastikas on pre-war Soviet posters, for Soviet pro-Nazi posters, for posters about Soviet-German friendship ca. 1940 etc. and came up largely empty-handed. Even assuming that Soviet leadership ordered destruction of pro-Nazi propaganda after German invasion, it is hard to believe that nothing fell through the cracks.

The only thing that turned up was the following poster, that was allegedly drawn up in 1940, to signify joint Soviet-German attack on imperial Britain, and then redrawn later with Berlin instead of London. However, it can possibly be a fake, because the Gothic font used in both is different (evidenced by the letter “н”), and the fact that the plane on both posters resembles Handley Page Hampden, and not any of the common German twin-engine bombers or heavy fighters, such as Bf 110, He 111 or Ju 88: 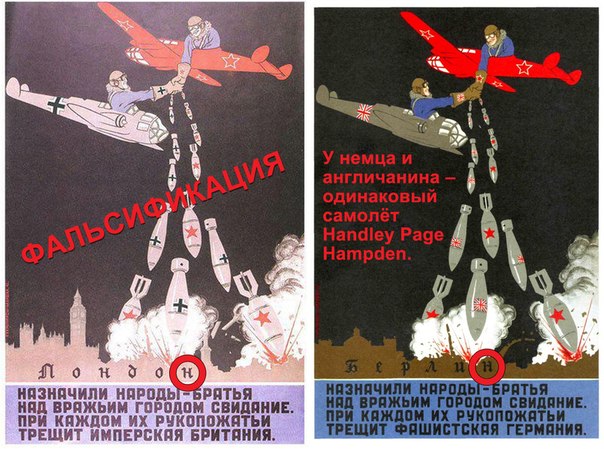 Here is another version, that is much better quality art, has style- and period-appropriate choice of font, and clearly attributed to famous Kykryniksy caricaturists and the poet Samuil Marshak: 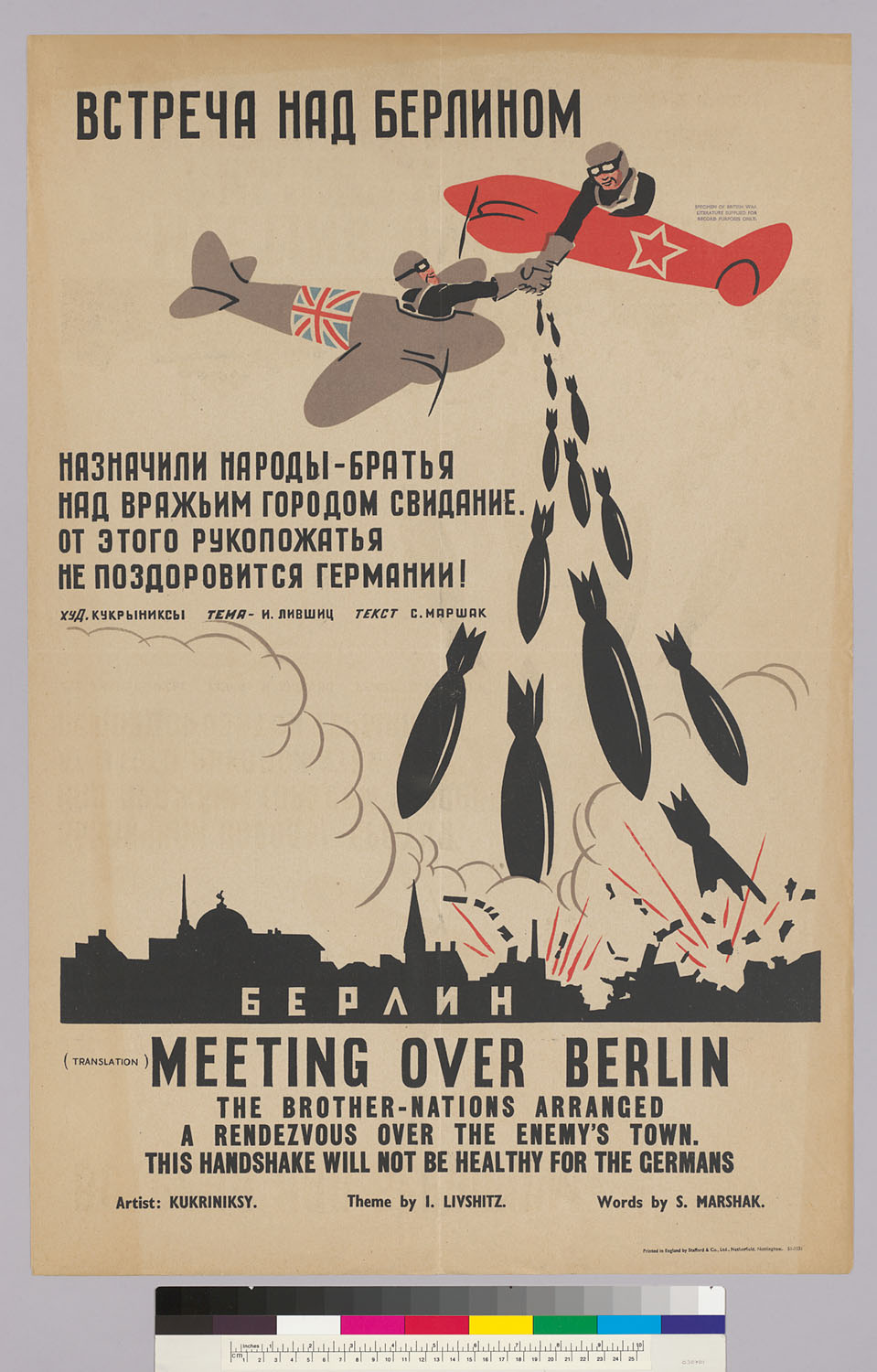 So, the question: are there properly sourced books or peer-reviewed articles on which Snyder based his statements?

and began to publish Nazi speeches.

Evidently "publish Nazi speeches" is different from just quoting Hitler or any other piece of Nazi propaganda. Definitely Hitler's speeches were not available in their full form to the general public. Maybe they were published in small numbers for internal party reading, which is totally different thing.

It seems to be totally invented idea by Snyder. Or possibly it is based on just one mistake by someone, similarly to how one instance of methanol poitioning in the Red Army mentioned by Vasily Grossman in his memoirs made Anthony Beevor to make a claim that "Red Army soldiers who discovered methyl alcohol drank it and shared it with their comrades".

calling for “the triumph of international fascism.”

This is totally impossible, "fascism" was a heavily loaded slur word since at least 1936. Also, fascism never claimed to be an international movement.

Regarding the poster, it is evidently a fake because the USSR never was at war with Great Britain not to say, bombing London. Even at the hight of the Germany-Soviet relations the official position of the USSR was that they were neutral. Making such poster would be contrary to the stance of the USSR in foreign policy.

The signing of the Molotov-Ribbentrop Pact reversed the tone spectacularly. The word fascist was eliminated and virtually overnight the press adopted a pro-Nazi point of view regarding Europe.... Hitler's speeches were extensively quoted in the Soviet press in 1939-1940, and the commentaries were favorable.

There is no doubt that in 1940, the Soviet Union was supplying Nazi Germany with materials necessary for the latter's war effort, particularly petroleum, grain, rubber and manganese. Even if the posters are counterfeit, the fact remains that the Luftwaffe ran on Soviet oil in the Battle of Britain. See Economic agreement between Germany and the Soviet Union, signed at Moscow on February 11, 1940. For a summary of its terms, see the German Foreign Office memorandum of February 26, 1940, by Karl Schnurre, in Nazi-Soviet Relations, 1939–1941, p. 131.

Not the answer you're looking for? Browse other questions tagged world-war-two nazi-germany soviet-union propaganda or ask your own question.

19
What were the Nazi racial views on Hungarians and the Japanese?
18
How were the Bulgarians regarded by the Nazis during World War II?
9
How did the KPD relate to the German state during the Molotov-Ribbentrop pact?
11
Synagogue Scene in Der Ewige Jude: Looking for more information
10
Why did Joseph Goebbels allow an all-Jewish Orchestra to exist and perform in Berlin from 1938 to 1941?
23
Who was the most successful German spy against Great Britain in WWII, from the contemporary German perspective?