What were the insignia of the Western Roman Empire and what happened to them?

When Romulus Augustus was deposed by Odoacer, it is said that the "Imperial Insignia" was sent to Constantinople. I always wondered what kind of object(s) this was and if it survived in any form. If it did, where is it now?

The imperial regalia of Rome were not a single thing but a collection of various objects carried in tow during processions of the emperor. The main items were various lances and spears along with a standard, which was an embroidered banner surmounted by a gold eagle. The emperor also carried a scepter.

Amazingly, a set of Imperial regalia belonging to Emperor Maxentius was recovered in an archaeological dig in Rome in 2006. Below is a photo of the scepter. The full collection is currently on display in the National Roman Museum. 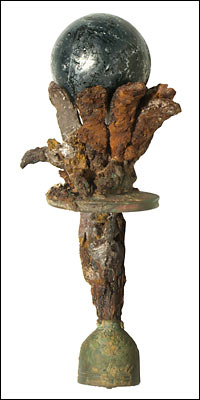 Perhaps the story of Odoacer is not quite the right place in which to look for a description of the insignia as they only appear there briefly for metonymycal purposes. However, something can be done from other sources.

One kind of insignia is the obvious - a crown. Another, less obvious, is a special kind of brooch. Or at least so claims Ann Stout in an article in The World of Roman Costume. Here's BMCR's reviewer's summary:

By this time two types of jewelry in particular had evolved to become associated with the imperial insignia of imperial power and authority, the jeweled brooch and a jeweled diadem that becomes a crown.

However, "By this time" apparently refers to Justinian's time so perhaps the brooch is a rather late addition and maybe too late for Odoacer. But crowns are well-attested since Constantine at least, in particular on coins.

From Republican times purple bands (of different width) on the toga were the preserve of the senators and the equestrians. Under the Empire purple clothing became progrssively identified with the emperor. I know that in Byzantine times (say, under Basil II) purple clothing was uniquely reserved for the emperor - if anyone put on as much as purple sandals that was a clear sign that they were in rebellion and claiming the throne. However, I am not sure how things stood in the old Western Empire.

Arnold's list of insignia and their journey back West

Jonathan Arnold in his book on Theoderic notes on p. 95 that according to a certain chronicle Zeno actually gave the insignia of Romulus Augustulus to Theoderic in 497! If that is true, they - or copies, especially of the clothing items - actually travelled back West with him.

an eagle- or cross-adorned scepter, a crown or diadem, bejeweled slippers, lances, and purple and gold-embroidered robes.

His footnote n.14 there gives a lengthly list of authorities on which he relied compiling the list. Note, though, the absence of the brooch.

36
Did the communication lag become a problem for the ever expanding Roman Empire?
65
Why did the Western Roman Empire collapse but not the Eastern Roman Empire?
1
Did any ancient historian consider Tiberius' first year as Emperor to be the first year of his co-regency with Augustus?
5
What allowed or prevented Roman conquest in terms of population, climate and geography?
8
Were the Roman Empire provinces Alpes Poeninae and Alpes Graiae different provinces or the same?
5
How were cities administered in the early Byzantine Empire?
18
What was the importance of the patrician class in the Roman Empire?
29
Why was the Roman Empire considered an empire rather than a kingdom (again)?
6
What is the evidence that Galerius raised Severus II to the rank of Augustus?