Extent of Empire of Lalitaditya Muktapida?

I recently came across this Wikipedia page of Lalitaditya Muktapida. The map in the page shows an enormous empire of him, stretching from China to Anatolia (as far as I can make out) in a relatively well documented period of history (724 -760 AD). This surprises me because this period was dominated by Muslim armies, and I had never heard of such a vast empire based off Kashmir before (in spite of me being an Indian). So my question is: is the map in that page accurate? Or perhaps did he rule over much lesser empire?

The map, is incorrect. Most of the source about Lalitaditya, is from Kalhan. Neither being a contemporary, nor being independent, Kalhan can be said to have exaggerated. I would like to quote Mohd. Ashraf

The descriptions of his foreign expeditions have a mixture of historical and legendary details. His first enterprise was directed against Yasovarman, the ruler of Kanyakubja or Kanauj. After the defeat of Yasovarman, the King is supposed to have triumphantly marched round whole of India, from Bengal and Orissa in the east to Kathiawar and Kambojas (Afghanistan) in the west. However, the absence of any historical details and the strict geographical order of countries named suggest that these conquests have been more or less of a legendary nature. There is no doubt that all the neighbouring territories such as Kangra and Punch were his feudatories. After defeating Yasovarman, Lalitaditya is supposed to have invaded and subdued Tukharas, a nation in the northern region. The country of Tukharas is undoubtedly the Tokharistan of the Muslim period comprising Badakhshan and the tracts on the Upper Oxus. It is also stated that there were S’ahi princes in the court of Lalitaditya. These were definitely belonging to a family of Turkish origin ruling Kabul Valley and Gandhara. The famous Chinese pilgrim to Kashmir, Ou-k’ong mentions that there were close relations between contemporary Kashmir and Turkish tribes. Turkish prince Cankuna was in the court of Lalitaditya. Alberuni also mentions that Kashmiris of his time used to celebrate annually on a certain day a festival to commemorate the victory which their King Muktapida had won over Turks.

The person who wrote the article, uses rough idea, and on listening 'Turk' and carves out as far as Anatolia on the map. Turks were not in Turkey, until long later. And after all, Wikipedia is a source from the people; it is not absolute.

That map looks like a joke. Like some kid randomly colored in a world map. Even the article doesn't agree with the picture.

The history of kashmir page on wiki shows a much more reasonable extent.

It is true this particular king was very energetic and made many campaigns against the Arabs into Persia and even upper central Asia, but these campaigns were just military expeditions, not a controlled empire. The enduring Karkota Empire was much smaller and only lasted for about 200 years. The following map shows the situation in 700 AD and this situation was not fundamentally altered by the Karkotas. 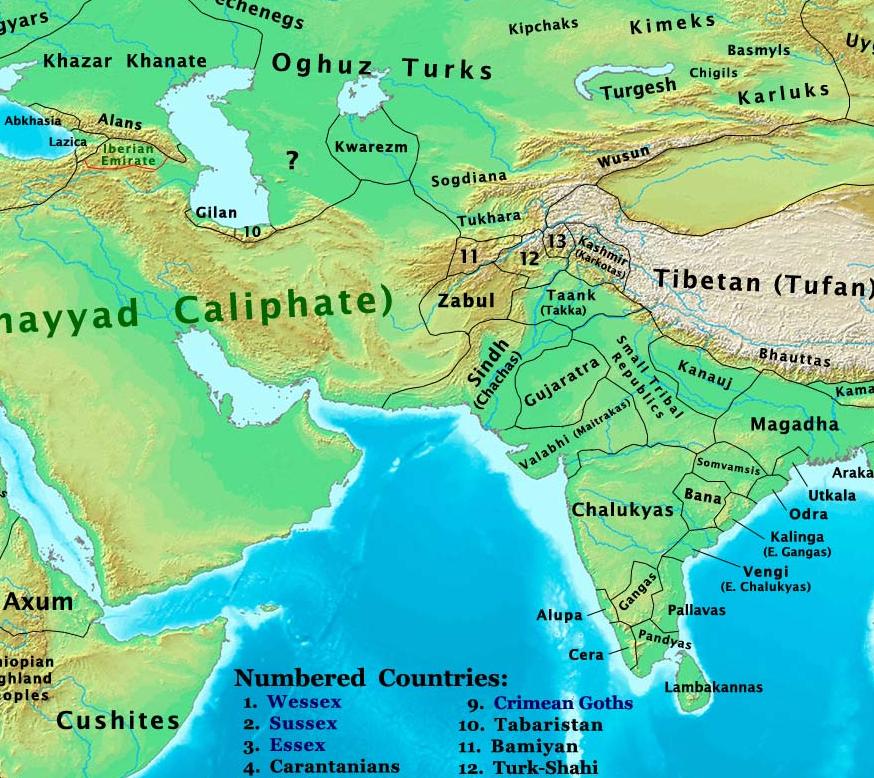 Not the answer you're looking for? Browse other questions tagged india early-medieval or ask your own question.

9
To what extent did Gandhi affect the factors that led to the partition of India?
8
To what extent is the independence of India a result of Indian Independence Movement?
4
Why was the Mughal Empire Persian oriented?
4
Was Kingdom of Cochin the only kingdom in South Asia to be a protectorate of (any empire of) China?
2
Where were Hindus and Sattagydia in the late Achaemenid Empire?
1
What calendar did the Maruyan Empire use?