How were cattle cut out in the 19th century?

In the largest cattle raising countries - Australia and the USA, huge free ranging herds were kept. Nowadays, we use yards and crushes for husbandry activities such as drafting and calf marking (castration, etc). Small herds can be pretty tame, but it must have been painstaking to cut calves out of a 1000 head herd with defensive mothers out in the open, keeping track of your progress and stopping them from running back in. Was this the case? Or was there a particular way? Corrals/round yards may hold the manually separated animals, but what might free grazers have done without any facilities?

Then and now, the trained cattle dog.

Most of the large herds running in Australia were not as free as the question implies. Large cattle stations and runs in Australia did have conveniently located infrastructure like yards, paddocks, and dams for concentrating and holding animals for processing. Herds would be moved over long distances and divided as desired into manageable batches with skilled horsemen and highly trained cattle dogs. A genuinely rootless drover, to the extent such actually existed, would simply have to be very good at improvising or borrowing facilities along their way as needed. A trail-blazer would build with an eye to future requirements, a free-loader would borrow or make temporary improvizations. With good dogs and skilled riders, isolating and controlling the animals would be the least of their problems. 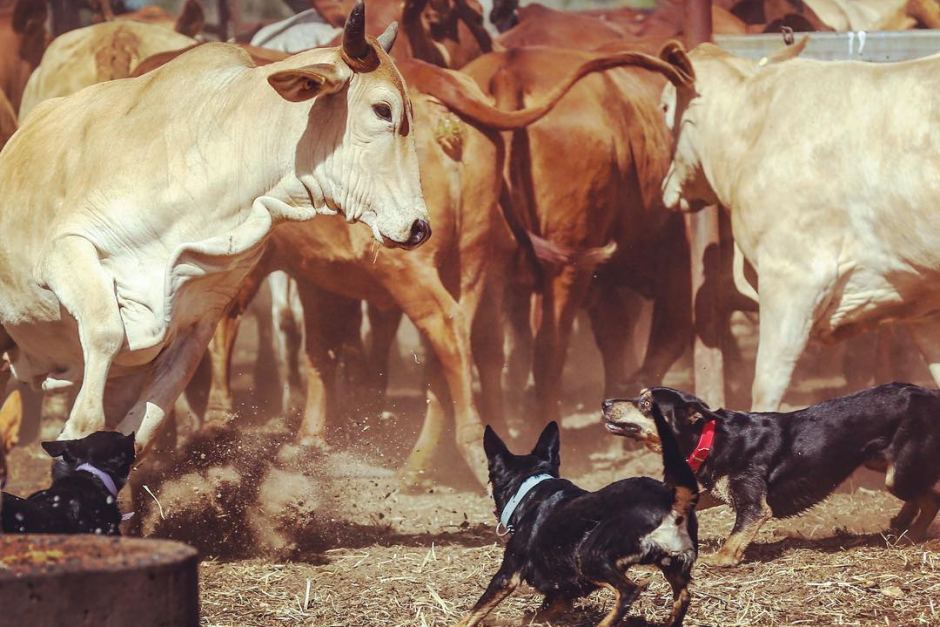 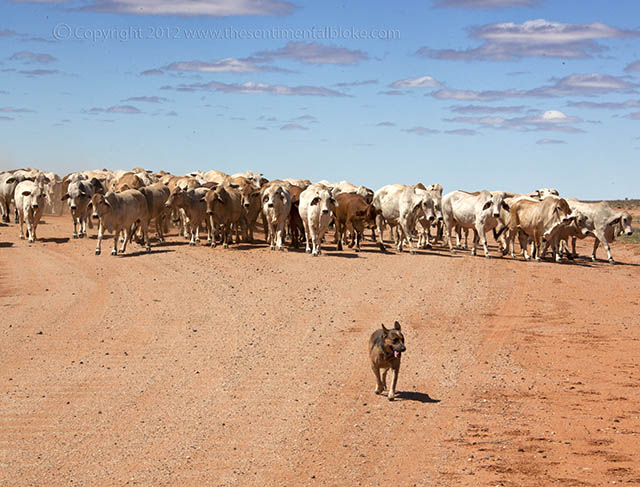 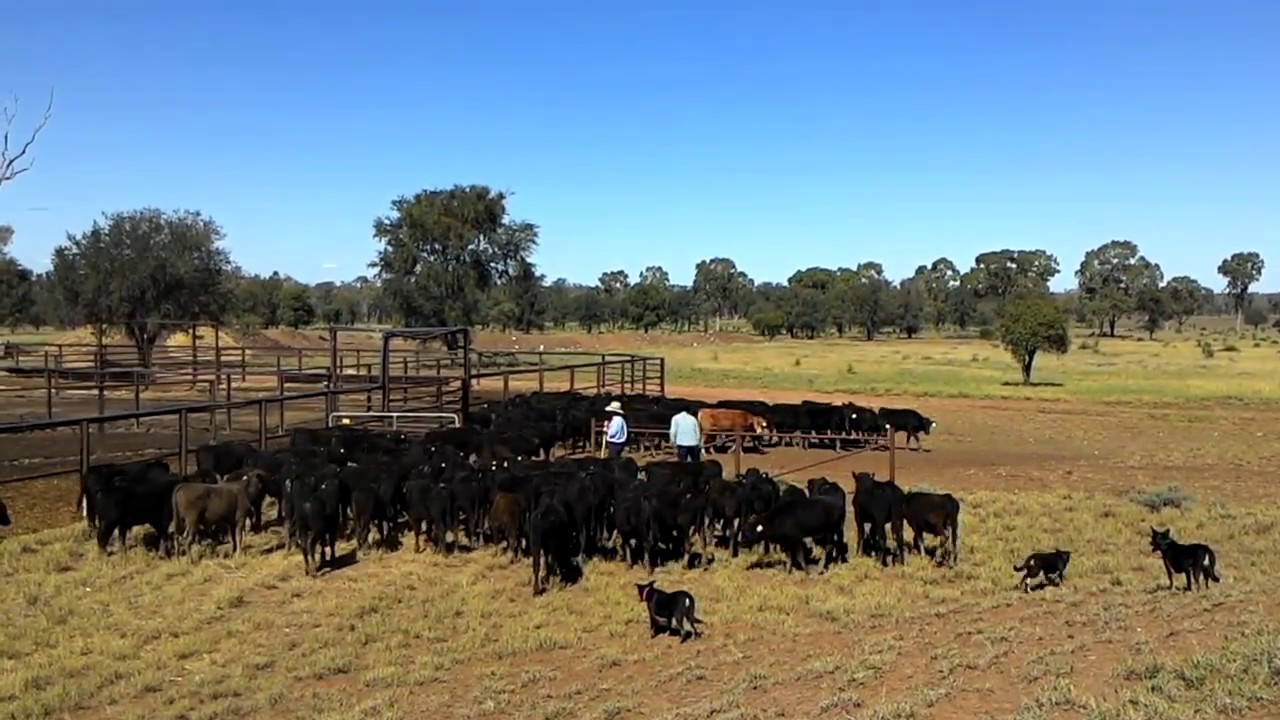 I've seen here in UK demonstrations by U.S. cowboys of cutting into a herd with a larriot, and very effective it is. So many of the cowboy films show herds being driven at speed for miles, which is far from the truth. WE presumably are talking about domestic breeds rather than buffalo, even if they are roaming in a wild context. The stock would never get any flesh on them if they were constantly being run all the way to the rail-head. So, cattle being quite curious, will not charge away unless the stockman charges at them, and I daresay for branding and castration it would not be too difficult to take out stirks from quite a large free-ranging herd.

The process of collecting and separating free-range cattle in early California was the rodeo (which later gave its name to a sporting event). These were held at specifically suited locations; place names in both Northern and Southern California refer to the practice.

Several Indian cowboys on horseback (often they were the only Indians locally allowed to ride horses), moving faster than the cattle, could force these into a dense, round whorl with the wranglers at the perimeter. They would then extract individual cattle from the rodeo, for branding or slaughter, by lassooing them with a horsehair lariat (reata).

There are a few details in Burcham's "Cattle and range forage in California: 1770-1880". Also see Cleland's "The Cattle on a Thousand Hills".

Australian cattle industry was part of the frontier wars and settler process. It was a capital intensive form of guerilla and economic warfare, and was backed by massive state-capital apparatuses in capital cities.

Cattle runs were sold or leased in head to extremely rich well connected families of old British capital, or extremely successful second generation Australian capital. The Downers of the 19th century in South Australia are an example of this kind of group.

Leasees in chief or owners would sublet on the basis of a certain body of cattle having to be on the run by a certain time. These anticipated growth requirements involved the destruction of aboriginal nations' economies and domestic economies, and this usually involved informal warfare. Sub-lettors would hire station managers as employees with profit sharing arrangments to actually live remotely. These station owners would recruit men, including out of country aboriginal men, to actually conduct the day to day business and warfare.

The concentrations of water, and the presence of capital goods allowing for coralling at watering points, or stock movement points, allowed for concentrated separation, including capitalisation through fixed plant and equipment.

Finally the chief gambit for agricultural companies was capital seizure not rent. The sub-tenant would fail stocking requirements and their stock and improvement seized via bankruptcy. The successful station manager would finally buy his lease from the company, instead of being an employee on profit sharing. And drought would wipe them out and the tenant in chief would bankrupt them and resume their ownership with all the improvements made. At the heart of this strategy is capitalisation, not a romantic wilderness, but pounds and shillings of wire and wood.

Noel Butlin is the seminal economic historian of the industry for the 19th century, though more recent works have developed the role of cattle capital in massacre and economic warfare.

Not the answer you're looking for? Browse other questions tagged 19th-century everyday-life agriculture animals labour-history or ask your own question.

5
Recommended Reading 19th Century US Settler Daily Life?
10
What did 19th century playgrounds look like?
10
How were 19th century American diplomats paid?
2
How many cattle were slaughtered in Alta California?
7
How were ethnographic maps in the 19th century made?
13
Was there self-censorship in private correspondence in the early 19th Century?
4
How much leisure time was enjoyed by English peasants in the 16th century?
1
What were the characteristics of the earliest varieties of European cattle, “bos tauros”, and how were they kept?
2
How were concussions treated in late 19th-century America?