Why are there no photorealistic paintings from the old days? [closed]

As proven by many recent examples, some people can develop their drawing skill to such a level as to produce drawings that are difficult to distinguish from photographs. Yet much of historical art is stylized.

How come we don't see any photorealistic drawings from the old days? They do not appear to depend on any modern technology, so it seems odd that no historical artist would try it. Was it simply because other styles were fashionable at the time, so that artists would stylize their paintings for artistic effect?

Was it because people didn't have enough free time to practice drawing, say, 1000 years ago? I find it difficult to imagine that nobody did.

Or maybe photorealistic paintings are in fact influenced by the development of photography, and the paintings we see today would simply not look particularly realistic to people before photography became mainstream?

(Another possibility is that I am simply factually wrong and photorealistic drawings from the old days exist, but are simply not famous enough for me to have seen them.)

It's obviously not due to lack of talent. It's important to ask first whether the ancients even aspired to photorealistic paintings. Consider that the ancients were adept at a form of artistic representation that was even more "realistic" than a photorealistic painting: sculpture. Even the Egyptians, famous for their stylized two-dimensional art, where quite capable of realistic sculpture. This bust of Nefertiti is from 1345 BC: 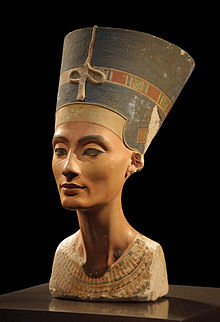 There's more here. And of course, ancient Greek sculptures had even greater verisimilitude. 2D art can never be as representative of 3D space as 3D art can, so it is not surprising that 3D art has long had a more realist bias than 2D art.

In two-dimensional art, artists generally privileged thematic and spiritual considerations over realism. According to the article on perspective, they "typically sized many objects and characters hierarchically according to their spiritual or thematic importance, not their distance from the viewer

Still, you are correct that not even early modern artists were as obsessed with "photorealism" as members of the modern photorealist movement. The photorealism movement, from its chosen name to its chosen style, was a reaction to the ubiquity of photography in the 20th century:

Pop Art and Photorealism were both reactionary movements stemming from the ever increasing and overwhelming abundance of photographic media, which by the mid 20th century had grown into such a massive phenomenon that it was threatening to lessen the value of imagery in art. However, whereas the Pop artists were primarily pointing out the absurdity of much of the imagery (especially in commercial usage), the Photorealists were trying to reclaim and exalt the value of an image.

The photorealists are clearly not, to a man, more talented than Vermeer and others like him. They are simply using their art to convey a message that no artist before the modern era would ever have needed or wanted to convey.

According to many Hellenistic accounts, photo-realistic painting was well developed and popular at that time. The legend says that an artist made a picture of a boy with some fruits, and it was so realistic that the birds tried to peck the fruits. The artist however considered this a failure, because the birds who did recognize the fruits as real, were not scared by the boy whom they evidently did not recognize as real. There are many such and similar accounts in the Hellenistic authors who wrote on painting. Unfortunately almost no painting of that period survived.

However, most of them you encounter not in the art museums but in scientific libraries: before the invention of the photography, scientists made many drawings of animals, plants, landscapes etc. These drawings were included in the books as illustrations, but high quality book illustrations are prohibitively expensive, and the originals are difficult to see (most of them are made on paper, and libraries hide them to preserve). Here are examples:

Returning to the artists, few artists in various epochs AIMED at photographic drawing, but some did. Examples are the Dutch 17th century nature mort. Polish painter Semiradsky (who drew mythology scenes) or the Russian Vereshchagin who painted the real scenes (a kind of journalist-painter): see Google images Vereshchagin, Example.

16
Why do we find a large number of nude male characters in ancient Greek paintings and sculptures?
29
What is the meaning of people "looking elsewhere" on medieval paintings?
8
Are there any antisemitic caricatures from France during the interwar period?
9
Bears on Bicycles - What are early examples of photographs or paintings showing bicycles used with animals in circus acts?
5
Are there any Midas portraits from the ancient era?
2
In the 19th century were paintings and collectibles worth, inflation adjusted, anything like today's prices?