How often did city-destroying floods happen in Mesopotamia?

I keep seeing Mesopotamia described as a floodplain, and I'm finding inklings of evidence that some cities in ancient Mesopotamia were actually destroyed by floods. But how common of an occurrence was this? And when did these floods stop, since I've never heard of modern Iraqi cities being wiped out by floods?

Ideally, I'm looking for an answer that would cover Mesopotamia during the 4th and 3rd millenia BC. And, as always, evidence is preferred over conjecture.

This is a great question, but I am finding it to be very difficult to answer. The 4th and 3rd millennia's are proving to be very challenging in terms of finding historical documentation relating to specific cities (as this timeframe is often considered Pre-History). That being said, it does seem that archaeology has provided us with some clues as to how often flooding occurred. There are several large clay deposits, which can be dated to several periods, varying from the Late Ubaid period (in Ur) to the Early Dynastic III period (Kiš). Devastating floods were not unheard-of during the first half of the third millennium BCE. The rivers sustained life in Mesopotamia, but they also destroyed it by frequent flooding.

I believe the best place to start would be archaeological evidence. For this we begin with Sir Charles Leonard Woolley. Woolley was a British archaeologist best known for his excavations at Ur in Mesopotamia. He is considered to have been one of the first "modern" archaeologists, and was knighted in 1935 for his contributions to the discipline of archaeology. Woolley does appear to try to tie together ancient "stories/traditions" with his archaeological finds. For the purposes of my answer I am staying away from this portion of his research as this is where things get very tough in regards to accuracy and factual evidence. Regardless it does appear that the city of Ur did experience a dramatic flood around 3100 BC during the Uruk Period (ca. 4000 to 3100 BC). The clay deposits found by Woolley were 3.75 meter thick. This is to say that post flood at least (likely much more) 3.75 meters of sediment were found in the area. For that much sediment to be laid down you could expect that said flood consisted of a lot of water. However, this flood (much like the others that follow) does not seem to have been a "world" flood. In this particular case no archealogical evidence of flood residue, of the same time period, was found just 23 kilometers (12 kilometers depending on source) from the city of Ur in the Sumerian city of Eridu. Note: Ur was established during the Ubaid Period ca. 6500 to 3800 BC (Sidenotes: Ubadian Culture & meaning of Ubaid).

As previously stated "this timeframe is often considered Pre-History" therefore it is very difficult to suggest, aside from using "stories/tradition", that any of the above mentioned floods "wiped" out any one of the cities mentioned above. However, it would be accurate to suggest that due to the archaeological evidence that the flooding was indeed significant. Thus, one could say that possibly a city or cities underwent dramatic change post flooding. One may even suggest that one or more of these floods were reasons for the "changes of power" resulting in "new periods" though this would likely be considered conjecture.

I find the following passage very interesting, however, I could not find verification outside of Sumerian tradition. And in this case it is very unlikely that any archeological evidence can be found. 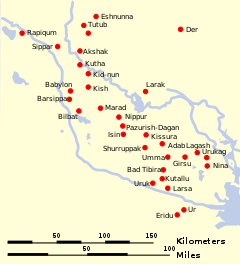 As for why the area doesn't flood now or in recent history. It does, Iraq, to this day still experiences flooding.

The Tigris River winds its way from its birthplace in the mountains of eastern Turkey through Iraq to the Shatt al Arab and the Persian Gulf. Fed by mountain snow and rainfall, the river is prone to springtime flooding…

As for why cities in this area are no longer destroyed by floods, I would have to say that this is a result of geographical surveying and other prior planning in city design. Also beginning in the 1950's Mesopotamian Marshes have undergone planned/designed draining.

The Fertile Crescent actually gets a respectable amount of rain. However, it tends to get it all in 4 months in the Winter. The rest of the year it is bone-dry. Then in the spring they get runoff from however much snow the Zagros and Taurus mountains managed to accumulate in those 4 months, again all at once.

So, unlike the Nile valley, the Tigris and Euphrates floods were not predictable at all. When they did flood, the floods tended to be really, really bad. This is generally held to have had an effect on the psychology of Mesopotamian society, making the people quite anxious and pessimistic.

Not the answer you're looking for? Browse other questions tagged ancient-history mesopotamia flood bronze-age or ask your own question.

14
How many hours per day did a Sumerian farmer sleep?
5
How early did restrictions on hunting start?
2
How many people did Liu Pengli kill?
1
Did Mesopotamia have coins to represent Gerahs & Minas?
12
How much contact did Sub-Saharan Africa actually have with the rest of the world since the beginning of civilization?
5
How did the Mesopotamian clay tokens known as bulla actually work to maintain authenticity?