Was the Flakpanzer IV used against infantry? If not, what was?

I know it's not good to take video games' word for it when it comes to history. However, in the game "Company of Heroes 2", the German team can deploy an "Ostwind" Flakpanzer IV, which to my understanding was an anti-air gun on a tank chassis. In the game, the Flakpanzer is used almost exclusively as an anti-infantry tank.

My question is, was the Flakpanzer IV (or any other German anti-air gun) used against infantry? If not, was there a different type of tank used to counter infantry?

It looks like the later models of Flakpanzer IV (post Möbelwagen), including the Ostwind, were indeed designed to be able to shoot at ground targets, if need be.

Though the Möbelwagen was intended to be a stopgap, it served the anti-aircraft platoons of the Panzer Divisions extremely well on the Western Front. Despite this, fewer than 300 were produced, and it was eventually succeeded by the first true Flakpanzers: Wirbelwind, Ostwind, and Kugelblitz all of which provided the crew with armored protection and full rotation when firing at either ground or air targets.

Presumably both the extra armoring and the added turret mobility shows that in combat situations they ended up needing to be able to hold their own against enemy ground forces.

This picture shows the turret of the Wirbelwind, which can pretty clearly fire down to ground level. The quote above shows this was no accident. 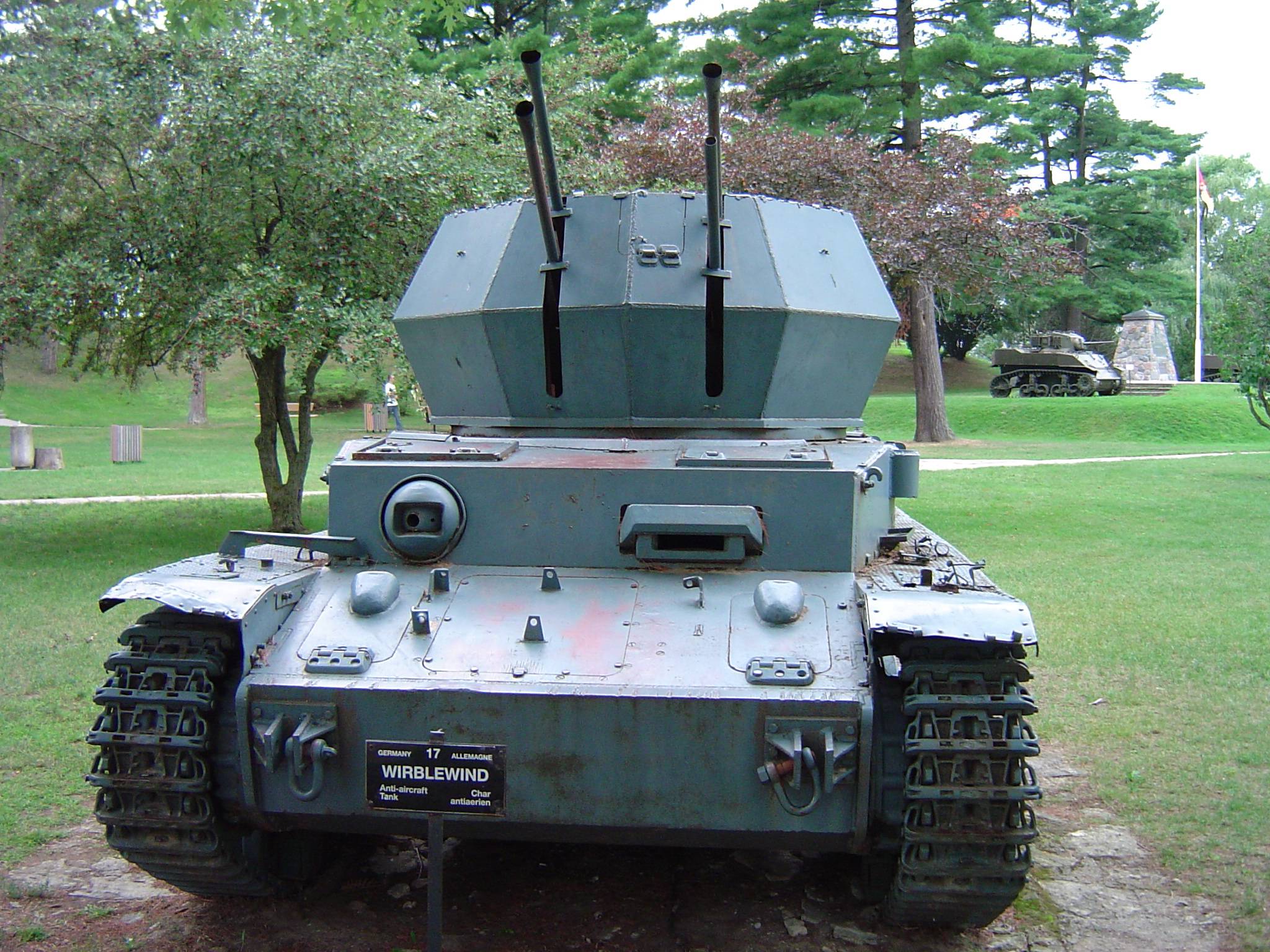 Flakpanzers and other vehicle mounted anti-aircraft guns were frequently used against ground targets, and this was in fact noted explicitly by the Military Intelligence Service in their periodic Intelligence Bulletins. The following is an excerpt they report as originating from a German anti-aircraft platoon commander:

The antiaircraft-antitank troops support the advance of the infantry and other arms. For this purpose the antiaircraft- antitank guns should be sited to a flank, to exploit their range fully without endangering the advancing German troops. The addition of 100 yards, more or less, to a flank hardly interferes with the effectiveness of the 20-mm gun, whereas it does affect the enemy's infantry weapons by widening the target.1

The use of anti-aircraft weapons against infantry appears to be at very least an informal doctrine in the German military, as they also include in the same intelligence briefing this account cited as coming from a German newspaper:

The antiaircraft-antitank units (the platoon is the normal fighting unit) are located in the column of march according to the prearranged operation order. In case of surprise attack, fife is opened either immediately from the tractor on which the gun is mounted, or else sections (which are fully motorized) leave the column and occupy a position on firm ground with a good field of fire, with the gun dismounted. After fighting, the units catch up with their original position in the line of march.2

There are also numerous first person accounts, for example this one from John Angier describing an action in Alsace-Lorraine in late 1944 when serving with the 100th Infantry Division:

At 0500, 9 December, the first of four hit and run flak-wagon attacks came, with his 20-mm blasting away. Rumbled right up to the foxholes. What a miserable helpless feeling that must be! Then two more attacks came off on schedule. Both of them to feel us out and each time Jerry would get a little bolder. When he saw that he was getting no return fire from anti-tank guns or tanks, which we didn't have, then came the real thing. Each time he rolled up, we tried in vain to knock him out with a bazooka.3

Even more effective than the light calibre anti-aircraft guns were the eighty-eights, which were used against ground targets throughout the war. For example against the British and French during the Battle of France in 1940...

The resulting Battle of Arras achieved surprise and initial success against German forces which were stretched, but it still failed. Radio communication between tanks and infantry was poor and there was little combined arms coordination as practiced by the Germans. In the end, hastily set up German defences (including 88 mm (3.46 in) FlaK guns and 105 mm (4.1 in) field guns) stopped the attack.4

...and in countless other engagements from North Africa to the Eastern Front.

As to your follow-up question, whether there was a different type of tank used to counter infantry, the obvious answer is that any tank is useful in countering infantry. That said, there were some purpose built mobile howitzers and assault guns such as the Sturmgeschütz III or the Wespe, but these were frequently pressed into anti-tank roles.

The answer is yes.

The Flakpanzer was armed with gun 3.7 cm Flak with armor piercing and hige explosive ammunition. The armor penetration was a when using dedicated Considerable ammunition. At 100 m distance it could penetrate 36 mm of 60 ° sloped armor, and at 800 m distance 24 mm correspondingly.

This makes it a destructive weapon against infantry and light vehicles support.

30
Was the Italian campaign a strategic mistake?
2
How blockadable was the Strait of Gibraltar before Operation "Torch?"
4
Were there any "retaliation" anti-tank weapons widely used by infantry in World War II?
4
Why was the German system of interlocking plates not used after WWII for armored vehicle construction?
3
How did the use of tanks differ in the Pacific war from the European war?
12
Which Allied aircraft scored the most air-to-air kills against the Me 262 in WWII?
10
Was WWII Systemic Drug Use by Axis and Allies Supported By Scholarship?
13
Do we know the situation in Britain before Sealion (summer 1940)?
1
What are some good sources on the everyday life of Soviet troops during WWII?