Who owns the Saudi-Iraqi neutral zone after the 1991 Gulf War?

According to Wikipedia, the Saudi-Iraqi neutral zone was created in 1922 by the British-controlled Iraq and the Sultanate of Nejd (the predecessor of Saudi Arabia). The same article continues:

As the Gulf War approached in early 1991, Iraq cancelled all international agreements with Saudi Arabia since 1968. Saudi Arabia responded by registering all previous boundary agreements negotiated with Iraq at the United Nations in June 1991. Thus ended the legal existence of the Saudi–Iraqi neutral zone.

The article mentioned the neutral zone no longer existed but did not say how the status was resolved. Who owns the neutral zone at the end? Is it Saudi Arabia, as victor of the Gulf War? Did Iraq subsequently dispute this (it seems that whatever step Saudi in 1991 did was unilateral)?

Bonus: If you could also edit the Wikipedia article to clarify this ;)

It has been divided between Saudi Arabia and Iraq.

Saudi Arabia and Iraq had in fact reached an agreement on partitioning the Saudi-Iraqi Neutral Zone in 1981. This was ratified as a general border treaty in 1983. This created the de factor border depicted in the above map, as dashed lines. Notice it cuts through the Neutral Zone at the centre.

Tentative agreement on the partition of the Saudi-Iraqi neutral zone was reached in 1981, and partition was finalized by 1983.

Both sides promptly forgot to notify the world until 1991, when Saudi Arabia finally registered the treaty with the United Nations. The negotiated border became internationally recognised thereafter. As you can see in the 1993 map below, the neutral zone was divided up through the centre. 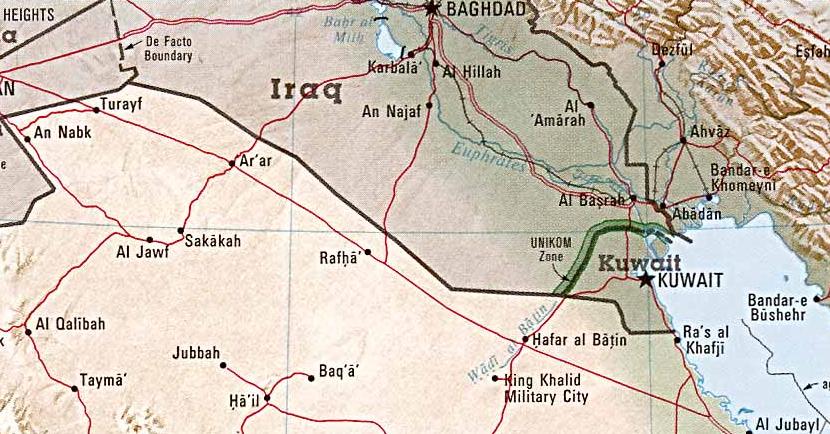 Maps are from the Perry-Castañeda Library Map Collection of the University of Texas Libraries.

Not the answer you're looking for? Browse other questions tagged middle-east international-relations iraq political-geography saudi-arabia or ask your own question.

8
Who really attacked first in the 1948 Israeli Palestinian war?
4
Why didn't America finish Saddam Hussein after the first Gulf War?
1
Who inherited from the pre- World War II German states?
1
Was the Gulf War 1990 a complete surprise, or was a military build up evident?
8
Who thought there might be a war between the British Empire and the United States of America in the 1920s?