Why were the Mongolian armies able to to use greater percentages of archers than (Medieval) Europeans?

Much has been made in other posts about how hard it was for European armies to train and maintain large numbers of archers able to use a longbow, crossbow, or similar weapons.

Yet, the Mongolians were apparently able to do that, with the majority (six in ten) of their own (horse-riding) soldiers (but not foreign conscripts) as archers. Only the English (but not other Europeans) appeared to approach this ratio.

How was this possible? Were the Mongolian bows simpler or easier to use than the European bows? Or did their nomadic way of life, horse- and cattle-herding make it easier for them than Europeans to learn and use archery?

Nomadic people could use most of their male population as soldier, and they were full time on horse and using bows regularly. Also bows are good weapon for their tactics that works for battles on open field.

Settled people however were mostly busy with agriculture, majority of their foot-soldiers are untrained peasants and go to war only occasionally and cannot train regularly for archery. Settled agriculture requires majority of the population busy with work unrelated to martial skills, however archery actually needs significant training (both physical and technical).

There is also a geographical difference between inner Asia and Europe. For the desert, steppes and large plans mounted fighters who can perform surprise attacks are very suitable. What is not mentioned here that mounted arches can also run away when they face larger enemy. They are also nomads, they can just move to another place and disappear. However medieval Europe is largely covered with forests and swamps, people are not nomads any more, villages will not just move away when someone stronger attacks. Light cavalry was still useful, but many wars are centered around fortifications, and permanent control over a territory can be achieved only by siege.

If you look at history, Huns, Magyars, Mongols were even able to effectively beat armies in Europe - for a while. But they are either disappeared or settled and changed fighting styles: it was not maintainable once they want to permanently control agriculturally developed territories without steppes.

The Mongolians originally lived as a tribal culture, and all of their sons would from birth be trained on the horse, bow, and other weapons. As the Khans turned them into a war machine they would continue the training all young mongols received by incorporating tactics, and cavalry formations. "There was no such thing as a civilian population in Mongolia. War was a full job and either you were a soldier and somehow supported a soldier." mongol tactics

The mongols entire culture was devoted to war during the time of the khans, its much easier to train your army from a young age, such as the spartans did, and have such high quality troops. The Europeans were training adults, in weeks to months for wars that were already happening or about to happen, the mongols had their army trained by adulthood. When the Europeans lost a battle, or even just lost archers, they had to wait months for replacements, the entire mongol army used bows proficiently, so even if you were heavy cavalry, if you lost to many archers you could easily shed your extra armor and move into the light cavalry archer ranks. Europeans taught their soldiers just 1 form of combat, and those soldiers lived or died with just that weapon, all Mongolians would be able to wield bows, swords, spears, their entire army was interchangeable. wiki

Typically from the European stand point especially at the time of the mongols, they almost never had large standing armies. Their armies were recruited from the local populace on a as needed basis, with little to no training, which is why having skilled archers was hard as they needed to be extensively trained and most likely kept on a permanent basis. While most of the mongol population was ready and trained for war from birth.

Tribal nomadic societies can sustain a greater percentage (around 20% which is basically all military age males) of the population as warriors. Once you have sedentary agricultural population, money based economy and specialisation the number if full time soldiers supported becomes a much smaller number (maybe 1%). Once you have cities (or other centres) supporting specialist classes you have to produce a surplus from the agricultural sector and transport it to support the non agricultural population. Sure a nomad society can mobilise a greater percentage of the population but it's structure cannot support a large number of specialists. Literate society, metallurgy, engineering, medicine, science. Sure the mongols adopted and used specialists in siege engineering, but this was a parasitic relationship as the nomad culture of the mongols was incapable of developing such things. Sure they acquired/trade metal armour and products but they did not develop such as an internal capacity.

The main point is that number of warriors in the main question and relives and society structure, the 'flat' structure of tribal society contrasted with the specialisation of cities/agriculture/monetary economy. The number of archers is another question, which you can look at the relative importance of archery in different situations.These factors dominate the question rather than methods of bow manufacture or warrior skills.

I question the Idea that Europeans soldiers were only trained for one form of combat, full time professionals had a range of skills, long bowmen proficient at hand to hand, Knights fighting on foot. The Mongols had a small range of types of warrior fielded and there was a high degree of interchange in the skills. The European armies existed in a more complex world of a much higher range of skills, were total competence across all of them was pretty unlikely to be achieved by individuals.

European armies in the main in this period were full time professionals of which there was generally an over supply. Recruiting more was generally just a matter of money which tended to run out.

I'd question exactly the interchange of light and heavy horsemen in mongol armies. Mongol heavy cavalry had horse armour and heavy per coal armour, was there specialisation of horses rather than riders? Have we got concrete documentation of heavy and light mongol warriors interchanging roles? While a lot of the skills are interchangeable they may well have been some status involved that in societal terms it simply was not done.

Bottom line European armies fielded less archers because archers were not as important in European warfare at the time. Archers typically are a large factor in warfare (pre gunpowder) when there are either large amounts of cavalry or unarmoured infantry present. In the absence of this, archery is just less important.

Bows are suitable weapons for mounted warriors because it is difficult to close with a mounted opponent. For a foot soldier a blade is needed, because it is not so easy to run away. The difficulty with maintaining a professional army is the cost, which in the case of archers is more expensive because training is problematic. Also, you must pay for both archers and foot soldiers to protect the archers. Some English kings actually started requiring yoeman to attend archery tournaments and taking other measures to basically force peasants to learn the complexities of archery. For nomadic peoples who spend their whole life mounted, they learn to use the bow from childhood and become skilled in it naturally.

The Europeans were not able to duplicate Mongolian bows because they were of extremely complex design and used materials native to central asia. What is known by scholars as the "Tatar bow" is a very complex construction. Typically it has various "arms" that are laminate and use animal bone and sinews of various kinds to maintain strength and tension at the proper points. This is called the "backing" of the bow. The joints of a Tatar bow are always carefully protected by a tight wrapping made of snakeskin or other waterproofed material. For information about such bows refer to "Der nordasiatische Pfeil." (1901) and "Die Bogen Nordasiens." (1902) by Bruno Adler, authoritative works on the subject.

To give you a sense of the complexity, there was found in Egypt a very ancient bow which apparently had been imported and eventually deposited in a 26th dynasty tomb in Thebes. At the time this bow was recovered, the archaeologists speculated for no particular reason that it was an Assyrian bow, but in all likelihood, considering its construction, it came from Eurasian plains and is a prototypical Tatar bow. To understand the complexity of this bow, consider the following cross-sectional diagram: 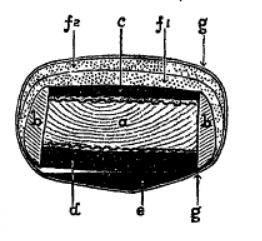 In this diagram, c and d are strips of horn and they have specialized grooves, the purpose of which is not clear; f1 and f2 are matted bundles of sinews in two distinct layers. a and b are wood of different kinds, specially prepared. The thicknesses of the various strips varies continuously throughout the bow. The joints between the arms are even more complex than the basic cross section shown above. As you can imagine the art in making such a thing is enormous.

There is little doubt that the Mongol or composite bow is a superior weapon. Draw weight is the test. Considering the massive worldwide distribution of this technology, it is just curious that the Europeans never mastered it. After all, the Europeans continued their use of inferior longbows for many centuries. Even archers can only use what tools they have.

Not the answer you're looking for? Browse other questions tagged military middle-ages warfare mongol-empire or ask your own question.

104
Why did archery not make a comeback when armor was phased out in the 18th century?

38
How did Medieval armies survive the use of mail armor in the deserts of the Middle East?
39
How severe were the casualties in ancient/medieval battles?
18
Why were people from the Asian Steppes able to militarily dominate Europeans on a repeated basis?
9
What were the advantages and disadvantages of Mongolian cavalry (compared to European cavalry)?
1
Why and how were the Mongols able to invade Russia successfully?
4
What was the composition of Medieval European armies?
13
Were groups (or 'companies') of dogs used to attack enemy armies in medieval battles?
2
How effective were archers/ slingers / skirmishers in Greek, Roman and Medieval Period?