When and what was the maximum extent of Nationalist China?

The Republic of China (1912–49) claimed a large area of land, the most notable difference compared to present-day China being the inclusion of Mongolia. However, it's my understanding that at no point in time was that entire area under de facto Nationalist control. For example, Tibet was never fully incorporated, and Taiwan was only regained after the surrender of Japan.

When did Nationalist China reach its greatest, de facto territorial extent? Preferably a map, but a list of territories will also be fine.

The maximum extent of de facto Nationalist control in China was achieved around 1946. This is after the Second Sino-Japanese War ended, and before the Second Chinese Civil War began in earnest. At this point, the Nationalist Government had recovered all of its pre-war territories (at the height of the Nanking Decade), and made several major additions including:

The Nationalist government also extended its influence over the Guangxi Clique, and to a lesser extent other peripheral regions such as Tibet. However central government control was weak, if not purely nominal. The Guanxi Clique for instance could not be ordered; the government had to rely strongly on good will and common antipathy towards the Communists.

Unfortunately there doesn't seem to be any particularly good map to illustrate this. The best I've found is this map of the extent of Nationalist government influence before the Japanese invasion. The Nationalists controlled regions are in green [2-7] plus Kweichou [9]. Note that that central government did not have control over Kwangsi (Guangxi) [8]. 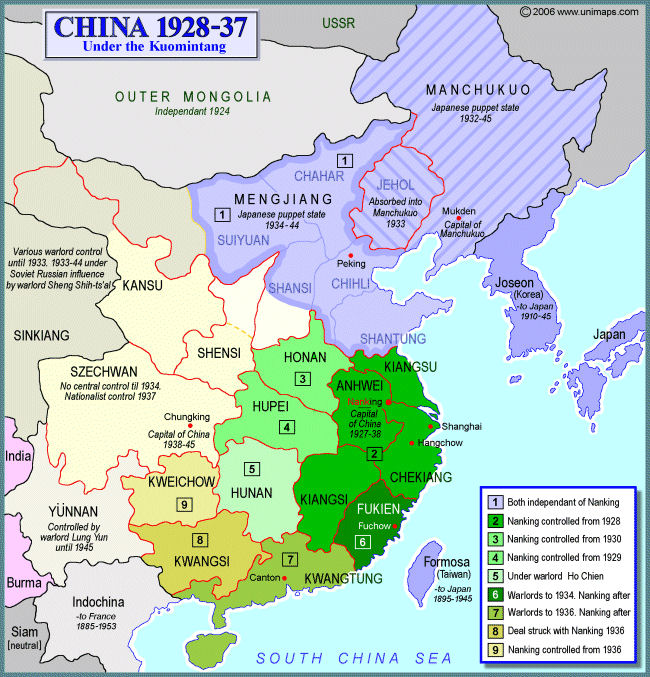 As discussed above, after the Sino-Japanese War, the Nationalist government ultimately recovered all of its pre-war power base, and further gained control over the provinces Hunan, Yunnan, Sichuan (Szechwan), and Taiwan.

Nationalist forces also made gains in Northern China and Manchuria, including parts of Gansu, Shensi, Chihli, and Shanxi (Shansi). Borders were far more complex and fragmented in these regions however, and did not follow provincial lines. The following map of Communist areas in 1946, in dark brown the darkest red (burgundy?), illustrates by way of contrast the irregular extent of Nationalist control in these regions.

If we're talking about the Kuomintang, then what's known as the Nanking Decade was when they held maximum power.

In the very early republic Yuan Shikai controlled more territory, but not for long as his inability to stop the exploitation of China by foreign powers and his general conservatism made him very unpopular.

Source: China in war and revolution, by Peter Zarrow.

Also, neither the Beiyang government nor the Kuomintang could rule anything in the same way that Mao did. Chiang was more like a mediaeval European king, who got the allegiance of warlords, by being the strongest warlord around.

This question depend on what you mean by control.

Just before the Japanese invaded Manchuria, the Nationalists controlled the most territory. But usually its a local warlord pledging to obey the government, so in reality the Nanjing government doesn't really have much control over local issues. But these warlords were made generals of the government and usually enrolled in the KMT, so they were still under KMT control on a level.

Not the answer you're looking for? Browse other questions tagged 20th-century political-history china political-geography or ask your own question.

2
What was the area of Nazi Germany at its height?

5
When and why China started to make a difference in the superpower arena?
99
Why China was able to unify and not Europe?
8
To what extent was China unified?
16
To what extent did the CPC avoid fighting with the Japanese?
22
To what extent was prohibition supported by the American public?
5
Was *Green Eggs and Ham* really banned in China from 1965–1991?
11
When did China start thinking 8 was lucky and 4 unlucky?
1
What was the role of state sacrifices and music in Ming China?
4
What were the American-equipped armies of Nationalist China equipped with?