I'm looking for some assistance in interpreting the silver hallmark in the image below. EPNS tells us it's not real silver, could 1706 really be the true date with that in mind? What does the shell-like stamp tell us? Origin? Found in Sweden, while this may not necessarily be its origin.

Thank you very much, Fredrik 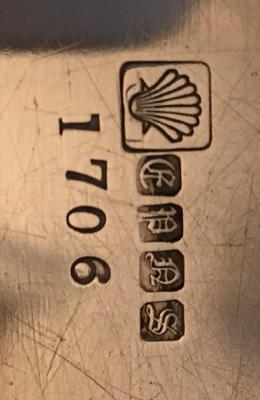 It looks you have an Electro Plated Nickel Silver.
The technology is not old enough to origin from 18th century.

From a site where you can find identical font type:

And the picture which is similar enough: 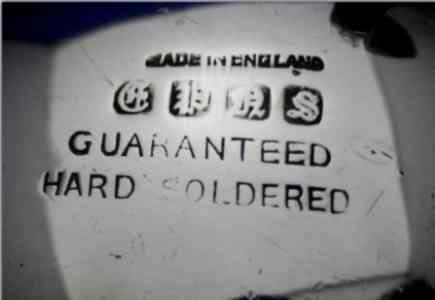 So the number as Steve Bird suspected correcty it should be a batch number. Most probably your item and this one made in very different series, but the material is the same. It doesn't contain silver, it's content typically are: 60% copper, 20% nickel and 20% zinc. This formula also known as (in)famous german silver, beginner silver investors sometimes fall into the trap mixing up it with real silver. It's density is significantly less than real silver. It is 8.3 gr/cm3 instead of 10.5 gr/cm3.

Not the answer you're looking for? Browse other questions tagged 18th-century silver silver-hallmark or ask your own question.

34
When was Silver ever more valuable than Gold?
8
What is the mark next to the hallmark on this silver object?
8
Why did silver gain prominence in trade over gold in Early Medieval Europe?
1
At the end of the Seven Years War, what was the total amount of gold and silver in Britain?
5
What were the largest European Treasuries, in gold and silver, at the end of the Seven Years War?
3
Gold coin vs Silver coin exchange rate fluctuations in antiquity
13
What are the dates of these panoramas of Paris?
8
What taxes were legally required to be paid in silver in Qing China?
1
When and where is this probably silver cross with a hollow from?