Was hitchhiking common in ancient Rome?

I am writing a story about a soldier who survived an ambush and he hid several days. Then he walked to a village. While he was on the way (walking on a road) he saw a caravan ...

So my question is: in the Roman era, did the caravans or passing people riding horses simply give strangers a ride if they had the same destination? (generally speaking)

I mean, in our modern era auto-stop is common in general. Many trucks would stop for strangers. At least that's what we see on TV. In ancient times bandits were everywhere but also in our modern era, a criminal can hijack a truck that contains a lot of food.

Anyway, would someone stop for this soldier? Or didn't people give lifts in Roman times?

Short answer: no. In general, nobody got "rides" in the ancient world because there were no rides, everybody walked for the most part. Carts were only used to carry cargo, not passengers. You would not want to try to ride in a cart because they had no suspension. Try this: get in a wheelbarrow with a wooden (or iron) wheel (not a pneumatic wheel) and have a friend push you over a cobblestone street. You will not want to repeat that experience.

Of course, sometimes people were carried. For example, if you could not walk and it was essential you get somewhere you might be transported lying down in a cart. Be prepared for serious pain. Normally the only thing biological transported in carts were food and corpses.

Another option was the Roman litter--basically a couch carried by slaves--depicted below: 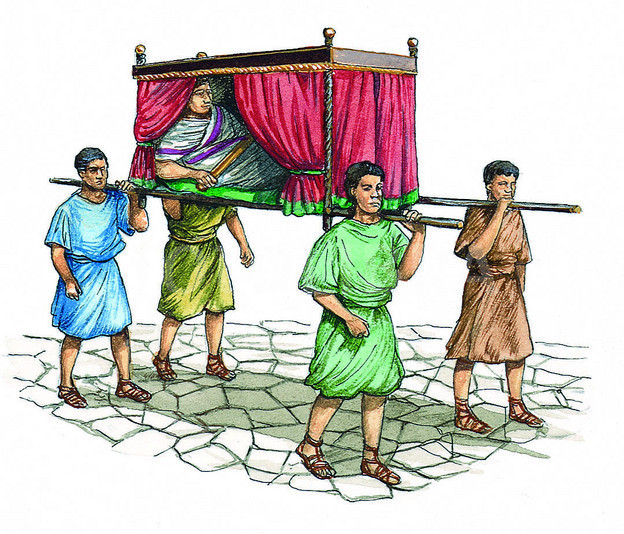 Rich people used them. I doubt your average senator would be willing to get out and walk while a vagrant took his place. Some self-indulgent snobs were known to ride all the way to Pompeii in a litter. Glad I am not one of their slaves. Such a long trip would require a LOT of rest stops.

Sometimes horses were used for travel in relays between stations. This was mostly for military messenging and was VERY expensive. Also, there were some special horse-riding cultures like Mongols and Scythians of various types. These races of men used specialized saddles and specially bred horses. Also, these men tended to be light and small of stature. I assume your story does not take place in northern Asia.

Another beast of burden was the ass, appropriate only for (light) women and children and only for limited amounts of time. A boy might get a ride on an ass from a stranger who had no load. Other than that, you are hoofing it.

What period? What place? A soldier for whom? Attacked by whom? Going where?

If this guy is a Gaul ambushed by political enemies of his family in the time of Julius Caesar, near his home, it's a different story than a Legionnaire in North Africa during the Punic War. Starting w/road regs differ.

First, there were different classes of roads. The ones you think of, made all of stone, last for thousands of years, are primary military roads. They existed to marcih the Legions on. In many places, there simply wasn't one, and the local road was improved dirt. Traffic on the big roads was limited, to prevent wear and tear. Cartwheels are the worst, so only occassional light buggies or official wagons got the go. Otherwise, everyone was walking or riding on an animal.

Because of this, outside of cities, except for short hauls, merchandise moved on sumpter beasts, not wagons. So your caravan is a good choice: merchants and guards on horses leading pack mules or pack horses.

Your character might ask permission to tag along. The chief merchant might okay this if he doesn't look dodgy. Thing is, most horses can't carry two riders: they aren't up to the strain. There would have to be a horse free for him

He might volunteer to join the guard in exchange for food & a mount until they get to X.

Not the answer you're looking for? Browse other questions tagged ancient-history ancient-rome social-history travel or ask your own question.