How was occupied France governed during World War II?

During the occupation of France during World War II, how was the area governed? Specifically, were local governments still allowed and who handled normal police activities? If local Frenchmen did police work, were they allowed to have arms?

After French forces surrendered to German forces, they set up a new demi-Fascist government under one of the more reactionary French generals, known today as Vichy France. 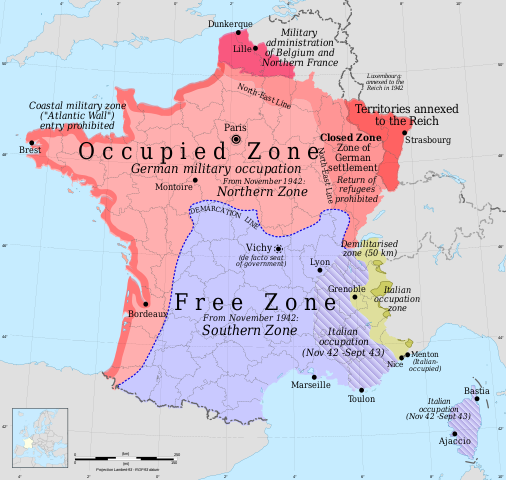 However, the German military effectively had the ultimate authority in the north, and its wishes were generally acceeded to in the south as well. This meant the Vichy goverment merilly rounded up the usual suspects: Jews, Communists, Gypsies, homosexuals, etc. for the German camps. The government was generally viewed as German collaborators, and at the end of the war it appears that most Vichy officials were put on trial as such. The Chief of State of Vichy France, Philippe Pétain, was convicted of treason in July 1945.

The Vichy French Gendarmerie was set at 60,000 men by the armistice agreement and following orders by the occupying Germans. Local police retained their normal duties although they were subject to German orders. They were not allowed to retain heavy military weaponry or motorized transport. They were also compelled to work with German occupiers. If the Germans demanded someone be arrested, they would arrest them or take other actions (an example of this was seen in the film Casablanca). They were also tasked with registering and rounding up "undesirable" persons such as Jews, Gypsies and homosexuals.

Politically northern and Atlantic coastal France was under the control of the Germans. Some local government activities continued in these areas but these were under tight German control. Local officials who didn't cooperate fully were typically removed from office and detained, sometimes even executed. Southern France, while not under total control, still had to tow the line with the German occupation. While there were some "elections" these were essentially rubber stamping people who had already been selected by others in power.

With some adjustments, occupied and unoccupied France was based on the limits of German penetration during the war itself. A stretch of the Atlantic coast was handed over to Germany, even though not occupied, while some German-occupied areas along the Loire River were handed back to the "rump" French state in compensation. Germany offered to adjust the border further in favor of the French state if it chose to locate its seat of government in Orleans (instead of Vichy). Basically, France was divided north and south under German and French occupation, as shown in the maps posted by others.

Northern France was directly governed under a German military occupation regime based in Paris,with the coastal areas under a separate authority. Southern France was nominally independent, but generally acceded to German wishes regarding the rounding up of "undesirables," and other matters, and therefore was seen as a "collaborationist" regime. It had its own police force (which was often used to do the Germans' bidding), and retained its navy (in Toulon and elsewhere), and a small "army."

This nominal "independence" basically ended when the Allies invaded North Africa, and the Germans occupied Vichy France as well, erasing the former boundaries. The French fleet in Toulon was scuttled by its crews, rather than handed over to the Germans in this second occupation.

7
What were the advantages and disadvantages to the creation of Vichy France, from the Nazi point of view?

22
"More Frenchmen bore arms for the Axis than for the Allies during the Second World War"?
12
Why did Algeria, Morocco and Tunisia remain loyal to France during and after World War II?
11
How much of "Russia" was actually occupied by the Germans in World War II?
7
Had the French in Paris started to learn German before their liberation in 1944?
3
Who were the police of Vichy France?
1
What language did Nazi German occupying forces speak in France?
1
Was it viable to continue the battle of France in the French colonies in 1940?