I was looking at this Wikipedia article, History of photography, and I wondered when commercial photography studios became common place and affordable for the average person.

According to the article, cameras became refined between 1851 and 1884. Photo quality became better and better and the equipment became more portable. Photographers like Mathew Brady documented historical events and took portrait photos of famous people. In the 1870's, photography studios were popping up all over. Even smaller towns like Tombstone AZ had a photography studio.

What I'm looking for that I couldn't locate on Wikipedia was the point at which photography studios and professional photography as a profession really took off. I'd assume it's during the time period I mentioned but were there certain events/people that led the way in this mass commercialization? What was the tipping point between it being something for inventors to tinker with vs. a popular money-making enterprise?

Basically, I'm looking for commercial/marketing innovation rather than technical innovation, a Jeff Bezos or Mark Zuckerberg rather than a Bill Gates or Steve Jobs.

I did some more research using the answers provided as a guide, particularly about the Daguerreotype.

I found some interesting info in this essay on the Metropolitan Museum of Art's web site: The Industrialization of French Photography after 1860.

I also located this paper on photography establishments in Akron, OH between 1850-1900: http://www.case.edu/artsci/wrss/documents/Gunn_000.pdf It testifies to the come and go nature of a photography studio business during the time period.

Then there was this brief article about Jesse Whitehurst

Jesse Whitehurst, the Virginia-born daguerreotypist who took this image, opened a chain of photo studios beginning in the 1840s, and eventually had establishments in New York; Baltimore; Washington. D.C.; Wilmington, North Carolina, as well as locations in Richmond, Norfolk, Petersburg, and Lynchburg, Virginia. ... Whitehurst was one of the leading photographic entrepreneurs of his day, and, by 1850, he boasted that he employed twenty-one assistants and that his photo galleries "were taking at the rate of 20,000 Likenesses annually."

And, this article from Cornell on the The Daguerreotype Revolution:

By 1850 American daguerreotypists were producing in excess of three million daguerreotypes each year. There were more daguerreotype galleries in New York than in all of England. Yankee ingenuity and entrepreneurship had transformed a cumbersome and exotic technology into an everyday service accessible to a burgeoning middle-class clientele.

Then, I encountered John Plumbe. He and his chain of Daguerreotype galleries from 1840-1847 are a good example of what I was looking for. I was looking at too late of a time period. Thanks to RI Swamp Yankee mentioning the Daguerreotype.

Overall, it seems that a Daguerreotype studio gave way over time to the photography studio. As it remains today, it was a relatively inexpensive business to get into and one that has a lot of turnover.

The commercial revolution was the technical one; Louis Daguerre made practical studio photography possible with the Daguerreotype, and licensed it far and wide to professional photographers in Europe and the Americas. Here are a few articles on the early photography studios in the US, all of which used Daguerre's process. There wasn't one particular end-user who was more influential than the inventor in spreading its popularity - Photography didn't have a Zuckerberg, but it did have a Steve Jobs (Complete with his own Woz in the form of Nicéphore Niépce).

Photography was in use by many artists from the Impressionists onwards; many used photographs as a basis for their paintings. The idea of fashion and photography took shape with many female photographers in the 1850s and onwards, where the Photographic Society of London offered prizes from their exhibitions. I consider this a move towards commercial photography, considering its later use in catalogs and such.

Cameras became more portable, as you noted, but when you go from people like Timothy O'Sullivan taking photos of the Civil War dead because they don't move (shutter time!) to the studios where you can sit and get your photograph taken quickly, things changed. Generally it was also the process itself, and the chemicals needed, that took time and money and made it specialized:

By the 1870's, the wet developing process gave way to a new innovation called the gelatin dry plate. No longer needed were the chemicals on site in the now famous photographers tent. Treated plates could be taken out to the field, exposed, and brought back to a dark room for later processing.

The camera mechanisms themselves were also going through a revolution. It was becoming possible to have the exposures take less time. The shutter releases were mechanically rigged instead of manually opened.

It was during this time of dry processing that Muybridge perfected processing of action images and mechanically rigged cameras to take his pictures. He could not have put his rows of cameras into action if each had to individually be processed on the spot.

But let us not forget the man himself, George Eastman. So if you are looking for a person I would suggest it might be him.

The final revolution of the 1800's took place when a man named George Eastman developed the idea of converting the preprocessed plate into rolls of sheets that were mounted on a roll holder inside of the camera. After each exposure, the roll would be forwarded by a special key, and after the roll was fully exposed, the whole camera was mailed or brought back to his plants for development. This camera was called the "Kodak Camera." Now every man, woman and child could become an amateur photographer!

There were some other links here: on the History of Photography

Before photography, the only way to get a portrait was to hire an artist. Clearly this is a highly skilled profession, and each picture could take weeks or moths of long sittings using up the both the artist's time, and that of all the subjects. The labor costs for this would be incredibly expensive (not to mention the oppertunity costs for breadwinners forced to sit still for the artist for hours on end.) There are rather a lot of unfinished portrait paintings floating around, due to either one of the subjects dying, or the financial situation of the patron's changing during the course of the work. For instance, Gilbert Stuart's famous George Washington presidential portrait actually looks like this: 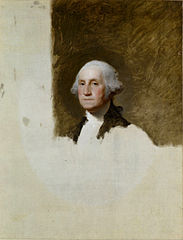 Photography, on the other hand just takes a few minutes to accomplish. So it would have been far cheaper (and easier) than artist portrature from the get-go. Once its image quality was competitive, photography would have instantly become the way for the common man to get a portrait taken.

You say that quality revolution happened "between 1851 and 1884", so there's your answer.

Not the answer you're looking for? Browse other questions tagged technology economy photography or ask your own question.

32
When and where did socks become common?
72
When did bombs actually look like this?
17
When and why did smiling at strangers and in photos become customary in the United States?
22
When did books first become affordable to the general population?
4
Why did European countries become more economically advanced than non European countries?
21
When did Josef Wissarionowitsch become "sexy" Stalin?
2
When did households become electrified?
12
When did fluorescent lights become common in Europe?