On March 9, 1933 Franklin D. Roosevelt (FDR) called Congress in for an emergency session, which would result in the speedy passing of the Gold Confiscation Act. According to FDR's Executive Order (6102) the Act would "provide relief in the existing national emergency in banking, and for other purposes".

The law required all citizens to hand over to the government via the banks almost all gold coins (US and foreign), bullion (bars, nuggets, dust, etc) and gold certificates within a few weeks after the order was issued. A short eight months after the confiscation a new piece of Federal legislation, the Gold Reserve Act, was enacted. The Gold Reserve Act revalued gold versus the dollar. In theory, a 1934 $20 gold coin would then be equivalent to 35 paper dollars. This was a substantial difference in that the value of the paper dollar prior to the Gold Confiscation Act was much less.

From an historical perspective in what way(s) was the Gold Confiscation of 1933 beneficial or detrimental to U.S. citizens?

I am not a Marxist Political Economist. I am a Marxist labour historian. When I relate to economic history, I can only really talk about the way in which capitalism actually functions (with reference to the truth systems of academia) from a "firm level" or "proletarian" perspective. This question would require a Marxist political economist to answer it in terms of academic truth systems.

Therefore, as I'm incapable of giving an academic answer, I shall give a political answer based on the truth systems used by proletarian revolutionaries.

There were three crises in US political economy that are relevant here: 1890s (Long duration) 1919 1930s

The reason why the 1930s political crisis could not be resolved through devaluation was that the Soviet Union existed, and the Europe wide revolutions of 1916–1921 were politically fresh and a real and immediate threat. The IWW was reviving in its new form as the CIO unions and the wildcatters in the 1930s. The CPUSA appeared to be a threat to capital. The option of forcing the proletariat to pay for the crisis was not viable, because of the very real demonstration that European proletariats would attempt to take capital during crises.

Further, the plan to grow consumer spending, grow capital growth and accumulation and tolerate inflation was an acceptable solution to the crisis of working class militancy.

Leaving the Gold Standard was merely a part of this further development of Fordism-Taylorism, and was essential for the development of the realisation of capital through a consumer good market (Department IIA). This has proved in the long run to be a far more successful method of accumulating capital than reliance upon realisation in Departments I or IIB (capital goods, luxury goods for capitalist consumption, respectively).

Was this "good" or "bad" for the average American?

In the 1890s the average american, the populist, the farmer labourer, the free silver advocate had been demanding an end to the deflationary nature of the gold standard. So they got what they wanted.

In 1919 the workers of Seattle and elsewhere in the US were demanding an end to the wage labour system and capitalism. Moving off the Gold Standard ensured that working class unrest could be bought off with inflation developed growth and consumption. So it was bad.

In 1933 the average American much more highly valued work, food, secure housing and freedom from want. By 1950 this had been delivered to male white industrial workers, and the myth that work, food, secure housing and freedom from want existed in the United States became a persistent myth until the 1960s ghetto riots. If compulsory gold standard deflation had existed in the 1930s, then it is unlikely that US capital would have bought off the US working class with a pittance out of the growth economy that persisted until the 1970s.

FDR was not the first president to come to power during a financial "panic" (aka: Recession or Depression). However, he was the first one after the advent of modern economics, and he was listening to the new economists.

Economically, banning private holding of gold had the effect of propping up the US currency. Normally in hard times (and I think 1933 certianly qualifies) people try to trade in things of value they may have in favor of "safer" things, and Gold was traditionally viewed as the safest. Without the law, in the preceeding years people were trading their dollars in for Gold, which was taking a lot of cash out of circulation. That's certianly not something you want to happen when the economy needs help.

Part of the effect of this is that there was pretty hefty deflation (27%!) between 1929 and 1933. This is exactly what historically had happened during every "panic" before. Why? Because as people "paniced", they started buying gold, and there were less and less dollars floating around. Basic supply and demand tells you this will increase the value of the few dollars remaning, which effectively decreases the value of everything else not tied to the dollar by law (which Gold was at the time). Deflation.

The next thing he did, which you didn't mention, was take the USA off the gold standard. That didn't make people quit wanting gold, but it immediately put dollars back into the market with everything else (and instead made the prices of gold rise through the roof, of course). 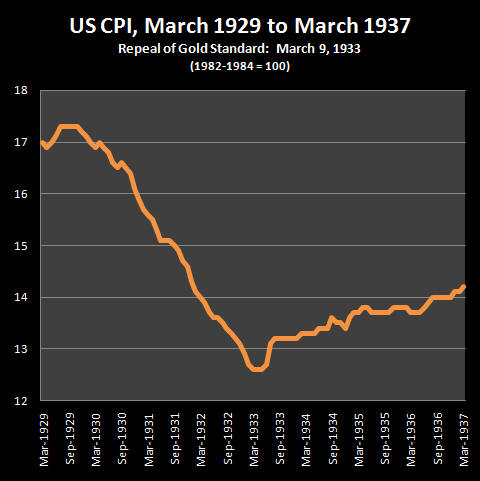 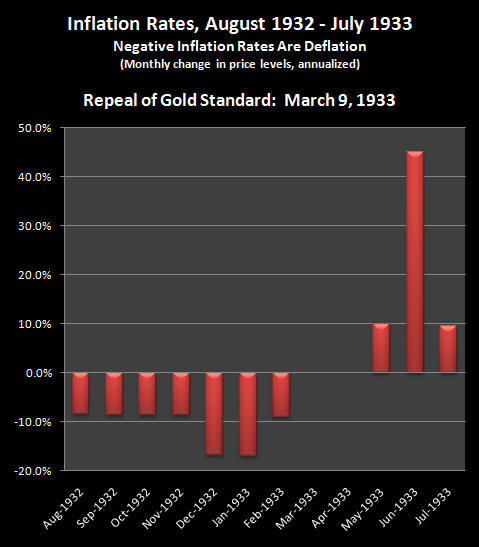 Note that we didn't have modern monetary theory at the time, so they didn't really have the option of increasing the money supply by lowering prime rates, like was done in the USA in the last (current?) recession. So prohibiting flight to gold by law was perhaps the best money-supply tool available (short of just mass-printing greenbacks).

So the basic answer is that during a financial panic, a flight to Gold takes money out of circulation, making things worse. Tying your currency to gold will additionally create deflation.

(Note: Charts and some content taken from this article: Puncturing Deflation Myths, Part 1 Inflation During The Great Depression.

It is a politically charged issue and it really depends on the economic and political side of the fence you're on (T.E.D gave the Keynesian view). As someone who's libertarian on most financial/economic policies, I see it as detrimental and that we're still feeling the negative effects of it today. As Alan Greenspan put it in Gold and Economic Freedom...

The abandonment of the gold standard made it possible for the welfare statists to use the banking system as a means to an unlimited expansion of credit. The financial policy of the welfare state requires that there be no way for the owners of wealth to protect themselves. This is the shabby secret of the welfare statists' tirades against gold. Deficit spending is simply a scheme for the confiscation of wealth. Gold stands in the way of this insidious process. It stands as a protector of property rights. If one grasps this, one has no difficulty in understanding the statists' antagonism toward the gold standard.

Basically, the other side of the argument is that FDR did not need to use this tactic to combat currency speculation or deflation. There were enough gold reserves to have maintained the value of the dollar sufficiently but not enough to do this and finance social welfare schemes like the NRA and so forth.

Therefore, I would tie the policy of abandoning the gold standard or a hybrid commodity system to the debt crisis that we're currently facing in the US and Europe. This video by Milton Friedman on the gold standard discusses it further. If you really want to get into all the details, visit FreeToChoose.tv.

I'd also say that gold confiscation restricted personal economic freedom which is another thing that I see as detrimental although those of other political views do not.

As I noted, it is something that's politically charged and if you're discussing it in most academic environments you'll want to stick with the Keynesian view in class discussions and papers to protect your grades (I'm probably risking down votes here for mentioning these views here). However, it's important that you know that there's more than one school of thought on this issue.

Not the answer you're looking for? Browse other questions tagged united-states economy government 1930s great-depression or ask your own question.

12
How much has U.S. currency inflated since 1792?
5
Why did Franklin D. Roosevelt confiscate gold from the American people during the Great Depression?
2
Inflation After Executive Order 6102 (FDR Leaving GoldStandard)

25
When and where was salt as valuable as gold?
34
When was Silver ever more valuable than Gold?
7
Are the quantities of gold that the Roman Empire looted and mined known?
5
Why did Franklin D. Roosevelt confiscate gold from the American people during the Great Depression?
3
Did alcohol consumption increase in the U.S. after 1933?
4
How cheap were sailing ships in Gold Rush California?
3
Was there an embargo of Soviet gold in 1932, and was grain the primary exportable good?
6
Which tools were available in 1933 for the Chinese government to intervene in the money market?
5
Why did the death rate increase in US cities in 1934, when it decreased in each year from 1929 to 1933