Were boycotts, divestment, and sanctions effective against apartheid?

In the 1980s there was a movement to use boycotts, divestment, and sanctions (BDS) to apply pressure on the apartheid regime in South Africa. These efforts included sports boycotts, refusal of some countries to allow direct airplane flights to and from South Africa, and divestment of universities' pension portfolios from corporations doing business in South Africa.

Does the historical evidence allow us to say anything objective about how effective a contribution BDS made to the end of apartheid? Can it be quantified in economic terms, or was it more a question of psychological pressure? Can we tell from historical records whether, for example, the masters of the apartheid system saw BDS as a source of concern?

BDS itself had limited economic effects, according to a study of South African financial markets:

Abstract: We study the most important legislative and shareholder boycott to date, the boycott of South Africa's apartheid regime, and find that corporate involvement with South Africa was so small that the announcement of legislative/shareholder pressure or voluntary corporate divestment from South Africa had little discernible effect either on the valuation of banks and corporations with South African operations or on the South African financial markets. There is weak evidence that institutional shareholdings increased when corporations divested. In sum, despite the publicity of the boycott and the multitude of divesting companies, political pressure had little visible effect on the financial markets.

That might lead us to think that the effects of BDS were largely non-economic. However, let me pull a line out of that abstract:

BDS couldn't have much of an effect on South Africa because South Africa was already pretty isolated from the world economy. After apartheid, foreign direct investment increased dramatically (though erratically): 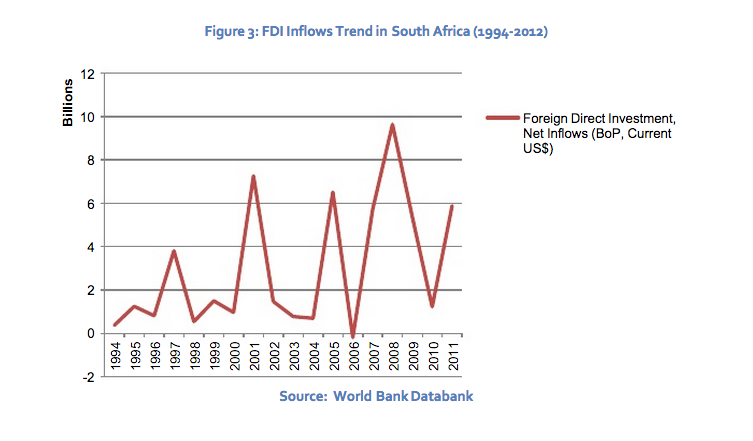 The intensity of BDS could still have helped some South Africans to realize that their economic isolation was (in part) due to global perceptions of their social policies, and that ending apartheid would allow them to integrate more fully into the world economy. If so, BDS was strangely more effective as an economic carrot than stick.

12
Why did The Crown give assent to Apartheid legislation during the 1950s?
16
Was violent or nonviolent protest more effective in the context of the 1960s Civil Rights Movement?
3
Were there any non-Afrikaner apartheid supporters in South Africa before 1994?
4
How did the white minority in South Africa see their situation in the apartheid times?
5
Did the apartheid South Africa leaders seriously plan to make the bantustans be independent countries?
8
Was Nixon's “Madman Theory” effective?
2
Would League of Nations and U.S. sanctions/trade embargo against 1930's Germany had notable consequences in Germany?