How common was smoking in first half of the 20th century?

When watching movies that were made in first half of the 20th century, one can see many people are smoking (cigarettes), but it is not they smoke all time long. I refer to the movies, because they show the era's fashion and habits.

Cigarettes are shown, because they were part of lives, but they are not much common, that everybody smokes every time. They play important role eg. no-one could imagine Humphrey Bogart or James Bond without it in some scenes, but they are not existing the entire movie.

In "Mad Men" series, which was made a few years ago, but action takes place in 1950s., the people smoke everywhere. We see a pregnant woman smoking, even a gynecologist smoking by his patient. I understand that people did not know everything about health problems caused by smoking, but I am not sure if this is not exaggerated, as compared to movies from that time. I've spoken to some older people and they say it was not true, but it could have been in the USA. From remembrances they say, yes everybody did smoke, it was common to smoke at home by children, at office, but it was not allowable (both by law or habits) in other public places hospital, cinema etc.

Do "Mad Men" show truth about people habits and are intended to shock the viewer how common it was? The movies from the era could have been somehow censored or directors did not show cigarettes because it didn't add anything to action or they had theater habits, where it was forbidden to smoke on stage because of fire-security reasons.

Or maybe the authors of "Mad Men" wanted to show something shocking, but unfortunately they exaggerated it? 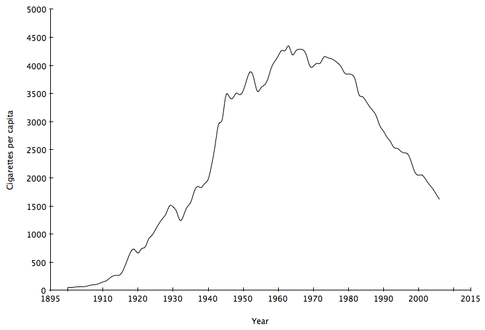 I don't watch Mad Men, so I'm not certain of the characters' ages, but I believe most are middle-aged white men, meaning that they'd have been born in the 1930s and 40s. Over half of that demographic smoked in the 1970s: 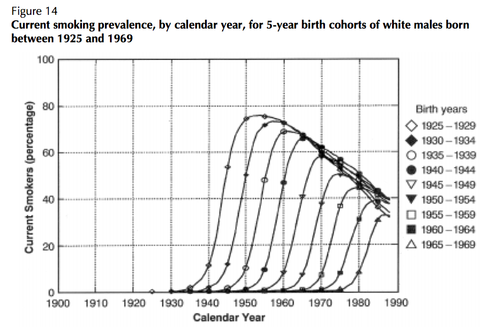 Charts are from http://www.cdc.gov/tobacco/data_statistics/tables/economics/consumption/index.htm (which now seems to have disappeared) and http://cancercontrol.cancer.gov/brp/tcrb/monographs/8/m8_2.pdf.

It certainly meshes up with my memory of the way things were in the early 70's. But my memory may be exaggerated too. (I was anti-smoking way before it was cool.)

It wasn't true that everyone smoked all the time, but it was certainly true that there were no real restrictions on locations smoking was allowed (short of near propane tanks). The first local public smoking restriction law anywhere in the US didn't happen until 1975, and states and cities didn't start banning it in restaurants until a decade later.

Before then, enough of the population smoked that this meant there was pretty much always someone smoking anywhere you might go. It wasn't everyone, but it was nearly half of all adults.

In addition the people who did smoke smoked way more than they do today.

Stressful places and/or places where a person is expected to just chill for a while would be particularly effective for inducing all present nicotine addicts into lighting up, as enhancing focus and inducing calm are that drug's two primary effects. Quite likely most of the people who today take ADHD/ADD meds as adults would back in the 20th Century be self-medicating with nicotine.

At that time, smoking in popular media was not intended to accurately portray the true quantity of real-world smoking. Instead it was used as a signal to the viewer either that this is a very stressful environment, or that the character is trying to relax. A notable exception is one scene from 1981's Body Heat. There was a will reading where pretty much everyone present started lighting up. When Ted Danson's character is offered a cigarette, he responds with "No thanks, I'll just breathe the air". It stuck with me all these years because it rang shockingly true.

So that's pretty much how I remember the 70's. If anything, Mad Men is probably making an attempt to more accurately portray the prevalence of smoking at the time, and it looks shocking to you because you are more used to seeing smoking portrayed in the symbolic way that media has traditionally portrayed it. If they are going overboard, they aren't doing so nearly as much as movies traditionally have underplayed it.

For men born in USA between 1900 and 1930, about 80+% of them had been smoking at some point; and during 1920-1950 ~70% of them were current smokers.[1] This matches other countries - at ww1, for example, all soldiers generally received also a tobacco ration with the expectation that most of them will need it. For UK statistics, see [2].

At the very beginning of 1900ies very few women smoked, that's why the movie industry was used for product placement, among other advertising channels, to facilitate women smoking and thus 'double the market'. For some age cohorts, 40%-50% of women were smokers in the end - high compared to modern times, but less than contemporary men.

Pipes instead of cigarettes

While smoking as such was very common throughout the first half of the 20th century, the smoking of cigarettes become mainstream during that period - in 1900, only a tiny fraction of tobacco was consumed as cigarretes, while from 1945 cigarettes were absolutely dominant. [1] has illustrative graphs for these changes.

Be careful using movies as research for the commonality of smoking in the early 20th century. Film stars were paid by various elements of the tobacco industry to be seen smoking and paid to smoke in films.

Here's a link to a reasonable summary of the scale of this advertising: http://news.bbc.co.uk/1/hi/health/7632963.stm

First of all, I want to remark that people in the first half of 20-s century knew about health risks of smoking. I don't think any new discoveries were made in this area in the second half of the century.

Second, all answers above address the situation in the US, so let me add some first hand experience from other countries (I grew up in former Soviet Union and remember the situation since the late 50-s). Most men smoked, but relatively few women. Smoking was prohibited in some places, like movie theaters, subway stations, hospitals, educational institutions. But in the universities it was prohibited only to students. A professor could smoke during an oral exam, for example, and this was considered normal. People in the audience could smoke on a seminar, or other meeting or presentation.

Parents usually prohibited children to smoke, even if they smoked themselves. Children would smoke when their parents and teachers could not see them.

The harms and health risks of smoking were well-known, and there was some anti-smoking propaganda. But the habit was generally considered tolerable.

EDIT. An interesting detail: 1949 Geneva convention on the treatment of Prisoners of war, Article 26 says: "The use of tobacco shall be permitted."

Depriving POW's of tobacco considered cruel and inhuman in 1949. (I suppose this convention is still binding for the US Government:-)

Article 28 of the same convention says: "Canteens should be installed in all camps where prisoners of war may procure foodstuffs, soap and tobacco and ordinary articles in daily use."

Tobacco was considered a basic commodity, next to the food and soap...

The anti-smoking hysteria which we see now begins, according to my observations in the US in the early 90-s. Over the last two decades it spread all over the world. This is a phenomenon I cannot explain. And it comes from a country where people like to talk about personal freedom and tolerance so much.

It looks like it is heading to a complete prohibition, with all terrible consequences which we see now in the "war on drugs", and which we can see in the movies about alcohol prohibition era...

Smoking cigarettes in the U.S. became popular after world war one, when tobacco companies distributed cigarettes to soldiers. For instance, see Smoking in the United States Military. Rates of cigarette smoking rose substantially after WWI. This was a brilliant strategy, as troops are under stress and especially likely to become habituated to a stress-reliever like cigarette smoking. The link between smoking and lung cancer did was not found until the 1920s, and really not until the 1940/1950s. In addition, the pH level in cigarettes makes inhalation more likely as compared to pipe tobacco and cigars, see this and this.

So, for any group of 20 adults, 1 would be smoking at any given time. But this is probably an undercalculation: people smoked more in certain situations than in others. Early in the morning, late in the evening, and mealtimes were circumstances of less consumption, and the middle of mornings and afternoons quite probably concentrated most smoking. Plus, as already discussed, men did smoke significantly more than women, and men are overrepresented in movies in general (don't know specifically if in Mad Men this is true, though, considering the title, it probably is).

19
How were small swords worn in the 18th century?
5
Was the painting of men's nails a rare practice in the mid-20th century?
10
How common were horses at the beginning of the 20th century?
17
In the first half of 20th century, how was gold inspected for authenticity?
11
Did Continental Army officers wear wigs or keep their hair white like their British Army counterparts?
4
How common was Nixon-esque espionage in 20th-century American politics?