From what part(s) of Germany were the majority of Texas immigrants in the mid-19th century?

A large number of the immigrants into Texas in the middle of the 19th century were from what is today Germany. However, the people were "German" more by language than nationality; the German Confederation of the time was not a monolithic modern nation-state. Did a few principalities, kingdoms, or cities contribute the bulk of these immigrants? Which ones? Or were all German-speaking areas roughly equally represented?

Here's a great map from the book German Seed in Texas Soil: Immigrant Farmers in Nineteenth-Century Texas by Terry Jordan: 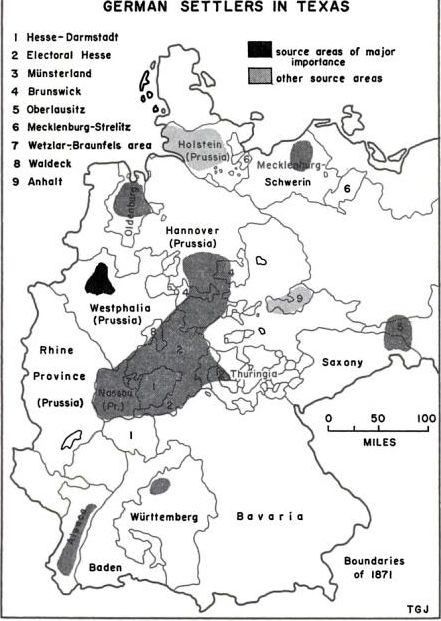 Page 33, visible on Google books, discusses this map in much greater detail.

I wasn't able to find an actual location-of-origin census, which would be definitive. What I did find was two major drivers for German immigration to Texas.

The first was Adelsverin, which was an organized attempt to form a "New Germany" in the Republic of Texas, starting in 1842. The founders of the society seem to be from all over Germany. The most famous product of this is probably Fleet Admiral Nimitz, whose grandfather came over from Bremen in north Germany.

The second was the 48'ers. These were Europeans (largely but not universally German) who were supporters of the liberal revolutions of 1848 which failed. German speaking liberals from all over Europe ended up exiled. The interesting thing about the 48'ers isn't which part of Germany they were from, but the politics they brought with them. German immigrants tended to be Liberal (in the original pro-voting, anti-authoritarian sense), pro-Immigration and staunchly anti-slavery.

Look up Adelsverin. It was a German settlement enterprise founded by German noblemen. The nobles seemed to come mostly from the Rhineland.

This is more of a comment but there are some museums in Germany which are about emigration to the states. See for example this website with contact data for research (They state that they have passenger lists etc.)

7
Upper-class male cohabitation in mid-19th century USA
10
How were 19th century American diplomats paid?
4
What type of provisions would seafarers use in the mid 19th century?
14
When did people stop translating their names when moving from one country to another?
18
Why were Germanic languages able to spread over much of northern Europe after 500BC? Did they mostly replace Celtic?
27
Which languages would be most useful in Europe at the end of the 19th century?
6
How did mid-19th century American legislation affect the corporate structure of railroad companies?