What's the story behind this photo of hikers who brought white plague cure to President Wilson? 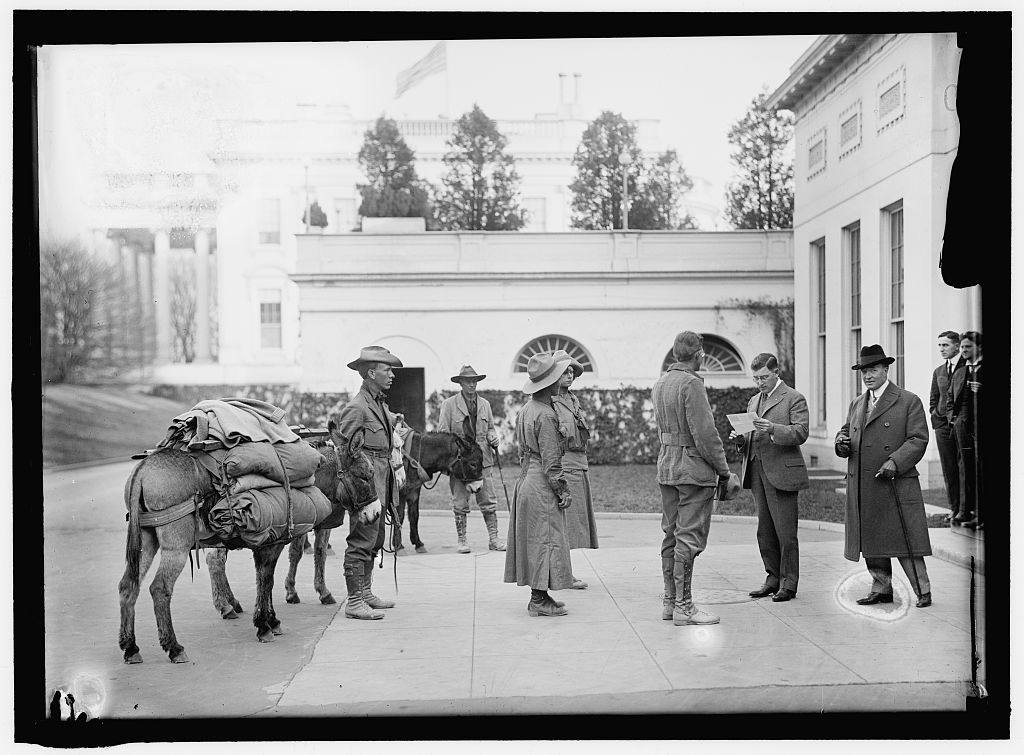 I stumbled upon this interesting photo at the United States Library of Congress site, which seems to refer to Woodrow Wilson, but I can't find any information about the incident described in the caption. Just curious. (There are also a couple of related photos, here and here.)

The "white plague" refers to tuberculosis.

The incident, which captured the nation's imagination for one day, is described by this report from the Grizzly Bear Magazine, April 1914:

The Pacific Coast has done much to attract the attention of the world, but one of the most unique things that has been formulated here and carried out to a successful termination was the organization of a hiking party consisting of several individuals who had been cured of so-called hopeless cases of tuberculosis by a remedy manufactured in Los Angeles and who were equipped there with pack burros and started to walk to Washington, D. C., to carry a letter to the President, offering to donate to the Government the formula for this remedy, providing the Government would keep it out of the hands of charlatans and treat the deserving poor free of charge.

The remedy was a quack preparation promoted and sold at least since 1911 by a convicted criminal and fraudster named Charles Aycock who posed as a doctor. He first tried peddling "Tuberclecide" in Albuquerque, then moved to Los Angeles. In February of 1915 the United States Department of Health issued a bulletin denying that they had been "investigating" this nostrum to counterattack false advertisements being published by Aycock.

In 1918 the Attorney General's office in Los Angeles tried to sue Aycock for "misbranding" (mislabelling) his products unsuccessfully, the FDA concluding Aycock had labelled his products in "good faith".

In 1927 the Postmaster General ordered the Los Angeles Post Offices to stop forwarding mail to Aycock's company on the grounds he was perpetrating a fraud and Aycock sued the postal service unsuccessfully. After the Post Office cut him off Aycock decided it was time to retire. By that time he was extremely wealthy.

Tuberclecide was one of many patent medicines sold at the time for tuberculosis which included products such as "Tuberculozyne," "Lung Germine," "Oxidaze" and many others. The practice of selling such remedies ended in the United States with the passage of the Federal Food, Drug and Cosmetic Act of 1938 which was incited by the Elixir Sulfanilamide poisoning and greatly increased the FDA's powers. Ironically, sulfanilamide was not a nostrum at all, but was a legitimate medicine. So, it was outrage over a poisoning by a real medicine that led to fake medicines being banned by federal law.

There are several meanings for "white plague", but the only one I've found that makes sense in this context is as a synonym for Tuberculosis (and some similar diseases that make the afflicted pale). The first vaccine for TB was used on humans during Wilson's tenure, so quite likely that (or some competing remedy) is what they are referring to.

Albert Calmette and Camille Guérin achieved the first genuine success in immunization against tuberculosis in 1906, using attenuated bovine-strain tuberculosis. It was called bacille Calmette–Guérin (BCG). The BCG vaccine was first used on humans in 1921 in France,[117] but received widespread acceptance in the US, Great Britain, and Germany only after World War II.

11
Who are all the people in this photo of the signing of the Civil Rights Act, 1964?
5
Was Woodrow Wilson really a Liberal?