What was the general attitude of people in states without anti-miscegenation laws toward interracial marriage?

Can we say that interracial relationships were somehow tolerated in states that had not passed any anti-miscegenation laws? 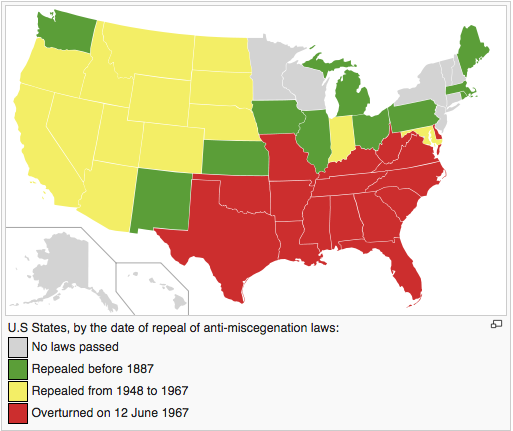 So the northeast and north midwest had no such laws in the entire 20th century. The West mostly had these laws during the mid-20th century, but repealed them before the Loving decision in 1967. The entire South had these laws overturned by the Supreme Court in 1967.

Here we see that 60-70% if people in Northern** states (which did not have such laws) "tolerated" interracial marriage. The West Coast is also very tolerant, while the Mountain states are split 50-50. The South is the least tolerant, with majorities of the non-coastal South being against interracial marriage, while the coastal South is split 50-50, like the Mountain states.

Here's a question from the 1977 GSS asking how you would feel if a relative married someone of another race:

* 1972 is the earliest GSS, so unfortunately we do not have data from the period before Loving vs. Virginia.

Attitudes toward miscegenation were governed by two factors: 1) the degree of antagonism toward minorities and 2) the perceived "threat" posed by large minorities.

The "North" (the former Union states) were the most tolerant to minorities. In the Northeast, the number of minorities was relatively large, but the degree of antagonism was small. In the Midwest, the degree of antagonism was larger, but the perceived threat was smaller. That's why most of these states either did not have, anti-miscegenation laws or abolished them in the 19th century.

In the South (the former Confederacy and border states), anti-minority, particularly anti-black sentiment was at a maximum, and there was also a large fear of large minority populations, which is why the laws remained until 1967.

Please refer to twosheds' excellent map for the relevant dates.

Not the answer you're looking for? Browse other questions tagged united-states 20th-century racism marriage or ask your own question.

13
What actions did the KKK take against miscegenation after 1967?
9
Were there moves to make anti-miscegenation laws apply to Jews in the USA?
11
What laws did the king "refuse to pass... unless those people would relinquish the right of representation"?
13
How were interracial relationships between African-Americans and Latinos treated in Southern states before the Loving decision?
9
Why were blacks still victimized in the Northern states after slavery's abolition?
3
Why were businesses operating as trusts at one point, and why did the practice fall out of favor?
2
What did anti-Greek stereotyping look like in the United States in the early 20th century?