Was the US close to running out of volunteer manpower during the Afghanistan and Iraq Wars?

I remember during the early-middle days of the Iraq War there were growing concerns on the need to reinstate conscription to shore up US troop numbers. Was there any legitimate concern behind this or was it just political/media fear-mongering?

The US was never close to reinstating conscription. This is popularly regarded (and probably correctly) to be political suicide for most elected representatives. However, the needs of the American military did push the volunteer recruitment system to its limits. The Army fell short of its recruitment goal by 5,000 people in 2005. The Army adjusted by raising the maximum enlistment age to 42. It also lowered admissions standards, in part by offering more waivers to recruits. As a 2007 study showed:

Pentagon statistics show the army met [its recruitment] goal by accepting a higher percentage of enlistees with criminal records, drug or alcohol problems, or health conditions that would have ordinarily disqualified them from service.

In each fiscal year since the U.S.-led invasion of Iraq in 2003, statistics show, the army has accepted a growing percentage of recruits who do not meet its own minimum fitness standards. The October statistics show that at least 1 of every 5 recruits required a waiver to join the service, leading military analysts to conclude that the army is lowering standards more than it has in decades. (New York Times)

Standards have risen again with the decrease in manpower needs, as this 2013 article details:

The Pentagon estimates that only one in four of today's youth are fit for military service. More than 20% of high-school students fail to graduate. Obesity and other medical conditions disqualify about 35% of candidates. Prior drug and alcohol involvement disqualify another 19%, and criminal records disqualify 5%.

It wasn't always this way. Just six years ago, during the Iraq war surge, the military had lower standards. Only about 86% of new recruits had high-school diplomas, and just 67% of recruits scored in the top 50th percentile on the Armed Forces Qualification Test. Waivers excusing health issues and prior misconduct -- even felonies -- were not uncommon.

Here's a graphic for U.S. troop strength in Iraq: 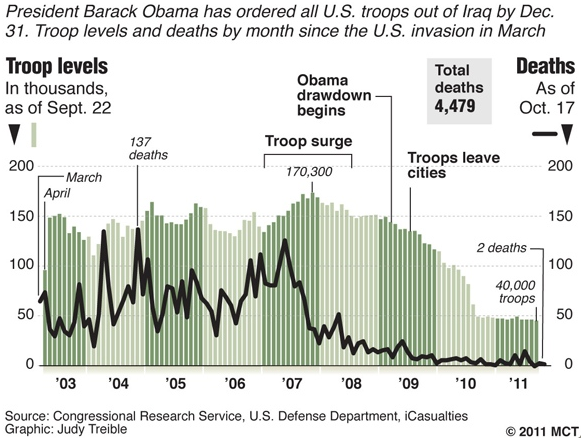 And one for Afghanistan: 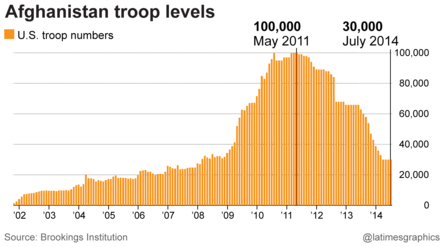 Not the answer you're looking for? Browse other questions tagged united-states military 21st-century war-on-terror or ask your own question.

26
Why were troops with bayonets often effective against enemy cavalry even though the bayonet was a “secondary” weapon?
1
Did it make sense to bring along infantry to reinforce attacking cavalry before the introduction of firearms?
4
Were the pre-WW1 alliances really created to prevent war?
2
Was there a time when George Washington discovered some of his soldiers absolutely refused to swear loyalty and obedience to the Continental Congress?
13
Were groups (or 'companies') of dogs used to attack enemy armies in medieval battles?
2
How “old” is mechanized infantry in terms of usage in warfare and what should be called as such?