Did any contemporary scholars draw a connection between the occurrence of the Great Schism and the Crab Nebula Supernova, which both occurred around the middle of 1054 A.D.?

I already asked at Christianity SE, and got a couple of good answers about people who recently made the connection, including a theory that it may have been invisible around Europe because of a volcanic eruption in Iceland.

A more likely explanation for the lack of widespread European reports of the A.D. 1054 event was offered by Zaleman⁷ and by Thomas⁸, who ascribe it to the Great Schism, which split Christianity into the Roman Catholic Church in the the West and the Orthodox Church in the East. The immediate events leading to the split occurred during 1054 July 16–24. Zaleman and Thomas suggest that church fathers would naturally have chosen to ignore the celestial event, rather than taking a chance on its misinterpretation as a portent. Political necessity rather than ideology (or failure of observation) is offered as the cause for the absense of such reports.

None of the above explanations is very satisfactory. Indeed, it is gratifying that a probable report of the A.D. 1054 event, by an observer in the Near East, recently came to light⁹. Ibn Buṭlān, a Christian physician from Bagdad, who lived in Cairo and then in Constantinople between A.D. 1052 and 1055 was reported (Fig. 1) in a book by Ibn Abī Uṣaybiᶜa (composed around A.D. 1242) to have written: "One of the well known epidemics of our time is that which occurred when the spectacular star (athari kawkab) appeared in Gemini in the year 446 H." (1054 April 12 – 1055 April 1). The internal details and consistency of the report identify the location of the star in Taurus (with the then-astrological sign of Gemini) during the early summer of A.D. 1054, in good agreement with the oriental reports*.

There are several points to be considered in this question. Let us start by seeing some hard facts. As quoted by Wikipedia article SN1054:

"Crab Nebula probably appeared in April or early May, rising to its maximum brightness of between apparent magnitude −7 and −4.5 (brighter than everything in the night sky except the Moon) by July. The supernova was visible to the naked eye for about two years after its first observation. Thanks to the recorded observations of Far Eastern and Middle Eastern astronomers of 1054, Crab Nebula became the first astronomical object recognized as being connected to a supernova explosion."

The important facts are the months in which each phase of the supernova took place. Supernovas have a characteristic curve (actually, two or more types of curves) which describes how light emission takes place. From a low initial value (April/May in the case of SN 1054), emission increases rapidly to a maximum within about 20-40 days (July 10th), then decreases more slowly over a period of 40-60 days.

Now, the position of the supernova in the sky is also relevant. In this case right ascension is 5h34m, declination is 22 degrees. However, in early July (such as now), the sun is very close to this position, at least during daylight hours as seen from Northern Europe. Please consider the following screenshot from the Stellarium software, calculated for Paris on July 13, 2015. 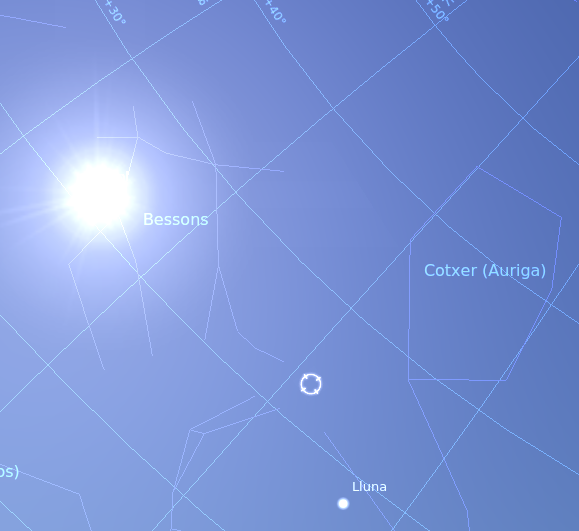 Basically, what can be seen here is that the 1054 Crab Nebula supernova is at about 20 degrees removed from the sun during daylight hours, when at maximum emission. It must have been difficult to see in this conjunction, as are the planets Mercury and Venus when very close to the Sun. Difficult - but not impossible. Moreover, this difficulty would have been precisely the same, seen either from North-Western Europe or from East Asia. At earlier or later dates, the Sun would have been further apart from the supernova thus lessening glare, but the supernova's own emission levels were much lower.

Now, consider where the supernova has been documented from: very clearly in China and Japan, with perhaps one observation from the Middle East. Does this mean it was not observed in Europe? One must think not, even though local conditions could have interfered: increased cloud cover or volcanic emissions. These could have had an influence in some parts of Europe, but not on a sufficient scale to affect the complete continent[2].

Thus, we are confronted by a natural phenomenon that, from a physical standpoint, could very well have been observed from Europe as from Asia, but that has been clearly documented only in the East.

To my mind, this is already a significant development, leading us to a series of questions:

Perhaps we need more hard information in order to give correct support to a serious explanation of the facts. In the present state of our knowledge, I am afraid we simply cannot give a definite answer to the question.

[2] Compare with the 1783/84 Laki event, that affected mostly the British Isles and parts of the North of France - but not Southern Europe or the Balkans. This is typical of wind patterns over the North Atlantic.

Not the answer you're looking for? Browse other questions tagged religion astronomy or ask your own question.