What was lost when the British burned the White House in 1814?

Dolley Madison saved many state papers, Washington's portrait, and silver from the White House before it burned (source), but what was left behind and lost? Were there other would-be famous items looted or burned?

The White House, which had been occupied for only 14 years at this point, had been richly furnished with sofas, writing tables, commodes, card tables, and beds by Jefferson. The Madisons "inherited" these furnishings, and brought in their own personal possessions. So most of what was burned or looted (like the small medicine cabinet pictured below) was historic only in the sense that it had been purchased by founding fathers. Some of the more notable looted items were Madison's dress sword and ceremonial hat, and a portrait of Dolley Madison. (source) 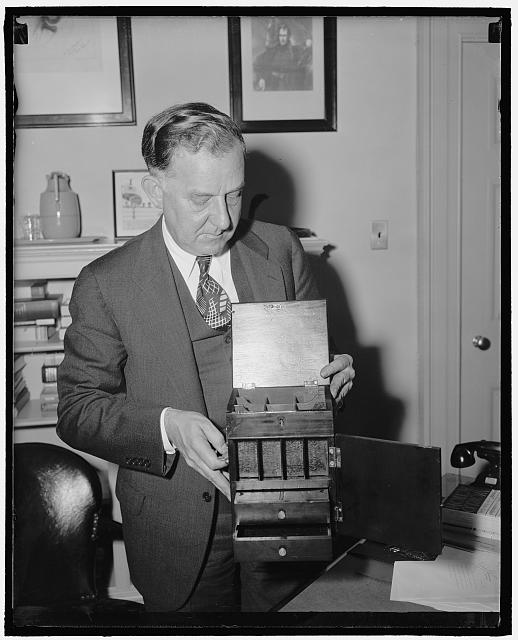 Many of the most important objects were not in the President's House, but in nearby administrative buildings. These took precedence over the White House's furnishings, and were hurriedly carried away from Washington as the British neared. For example, the State Department contained not only important official records and treaties, but the Declaration of Independence, the Constitution, Washington's correspondence, and his historic resignation letter. (source)

Among the most important items in Washington lost to fire were the 3,000 volumes of the Library of Congress as well as much of the art in the Capitol Building. The Capitol Building was considered by many contemporary observers to be a more notable target than the White House.

8
Financial ramifications of peerages created since the 19th century
9
When was the restaurant "invented" in Europe?
11
Did the British Army burn any capitals other than Washington?
3
Were the doors kept open for the entire Pennsylvania Ratifying Convention?
16
Was slave labor used in rebuilding the White House?
2
Was there a time when George Washington discovered some of his soldiers absolutely refused to swear loyalty and obedience to the Continental Congress?
6
Line houses and laws?
2
How well did King Harald V of Norway know FDR's dog Fala?
25
What time of day was the White House burned in August of 1814?