What was the northernmost region/city in the Roman Empire that spoke Greek as the native language?

My understanding is that prior to the migrations/invasions of the Goths, Huns and Sklavenoi into the Balkan peninsula, Greek and Latin where the most common native languages, alongside other steadily declining languages such as Thracian and Illyrian. Also, I'm aware of the "Jireček Line" which is the theoretical line that divided the Balkans into the areas with Greek influence from those with Latin influence

My question is, do we know what was the most northern native Greek speaking colony in the Balkans? I'm assuming such a place would be located on the coast of the Black Sea? What about inland Balkans? (Also, I am aware of the status of Greek and Latin as lingua franca's during Rome's imperial period, but I'm mainly concerned with the use of Greek as a native language.)

Definitely, Crimea (Chersonesos) or some place in its surrounding. Crimea's south coast was part of Roman Empire in 47 BC - 330 AD, and also a part of the Byzantine Empire later. Greek colonists settled the area much before Rome.

Update. I have found some more relevant information. During the Roman times the area at the North-East of the Black Sea (East of mentioned above Chersonesos) was ruled by the Bosphorus kingdom, which was a Roman client state to the extent that the king had Roman citizenship and a Roman name "Tiberius Julius" (plus personal name) and was protected by the Roman legions stationed there.

In 62 AD emperor Nero deposed the king and decided to incorporate the kingdom as part of Roman province Asia Minor. But in 68 AD the kingdom was restored. So the area was officially a part of Roman Empire in 63 AD-68 AD, about five years.

The most North-East part of the kingdom was the city of Tanais. The city was a Greek colony so Greek language was most likely the main language there.

So the most northern part of Roman empire (albeit only for 5 years) was this city.

This Map of Greek Colonies in the Adriatic shows that the most northerly posts were Pharos and Issos halfway up the coast. These were secondary settlements from Syracuse and Ionian cities, though. If you eliminate those you are down in Albania. 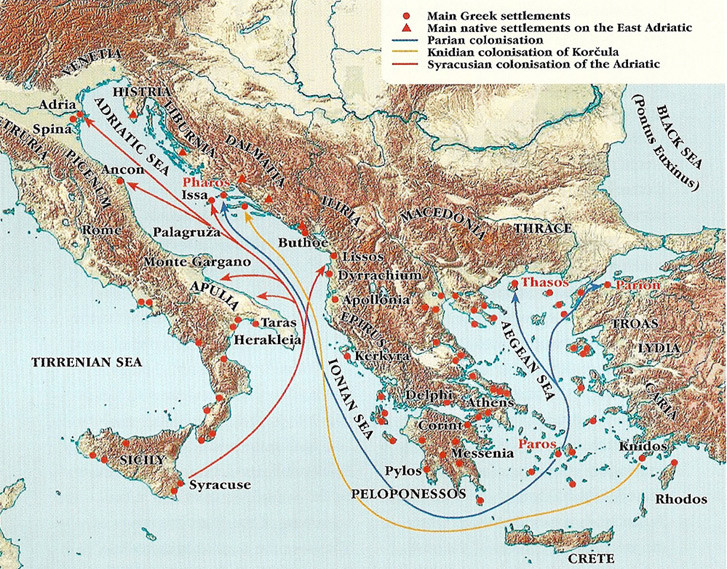 The town of Novigrad may be the most northern town of Greek origin. Reputedly it was originally founded by the Greeks as Neapolis (new city).

The Romanian Black Sea coastal site of Istria, was probably the most Northern most Greek speaking territory within the Roman Empire. The Greeks settled throughout many parts of the Black Sea region and even during Roman times, Greek was widely spoken in the greater Balkan and Black Sea regions as the primary language.

There is also the Croatian island of Hvar in the Adriatic Sea which was also settled by the Ancient Greeks. Although the Romans had a far greater colonial influence on Croatia's Dalmatian coast-(i.e. Split, Salonae and Pulia) and the larger Adriatic region, the Greeks did have some territorial influence in this region centuries before the Roman Empire. It is possible that the small, relatively obscure island of Hvar, may have also been the most Northern most Greek speaking territory, both during the heyday of Magna Graeca, as well as during the Roman Empire.

Not the answer you're looking for? Browse other questions tagged ancient-history roman-empire ancient-greece language greek or ask your own question.

33
What language(s) were spoken within the Holy Roman Empire?
5
What Was the Political Condition of the Region that Encompasses the Modern Russian State in the time of the Roman empire?
33
Was Alexander the Great Greek or Macedonian?
16
Why was not Greek alphabet adopted by other languages given the Greek influence?
9
What would slaves in the Roman Empire call their masters?
9
What is the history of the use of word dividers in Greek?
4
What was the cost of buying Silk in the Roman Empire
7
Why didn't the Greek language survive in Egypt?
16
Why isn't there a single trace of Germanic influence in Iberian Languages?