How did religions interpret rainbows before science explained it? [closed] 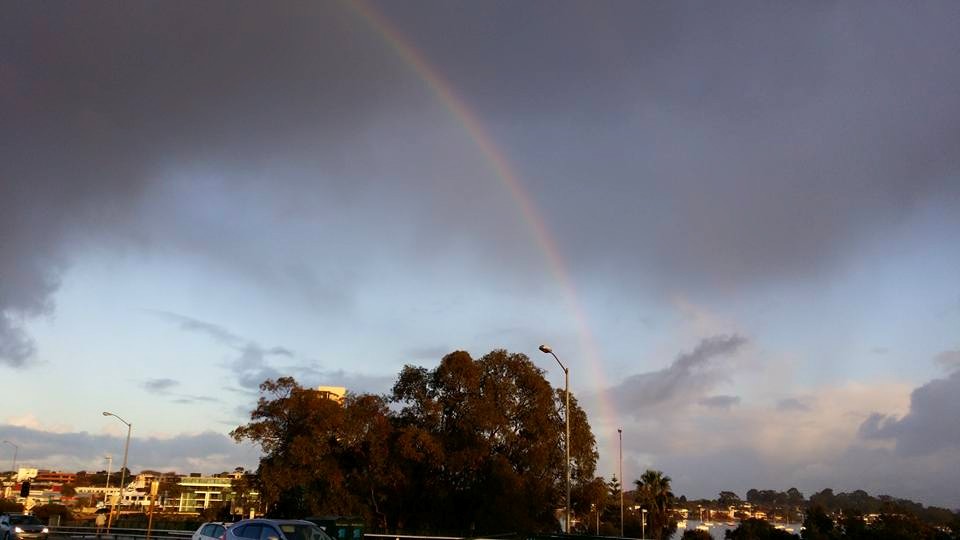 A rainbow this morning to work made me think of how religions used to interpret these colorful appearances.

Signs from the gods? Repent for your sins? A gift?

I want to know how different religions interpreted rainbows before science explained it.

Firstly let me say that this question was so nice I decided to do a bit of research into this and was done for the joy of knowing about rainbows. So let's see how people around the world thought about rainbows.

The rainbow, a natural phenomenon noted for its beauty and mystical appearance, has been a favorite component of mythology throughout history. -sds(stack exchange)

Greco-Roman - It was a path made by Iris to connect heaven and earth.

Chinese - A silt in the sky sealed by the goddess Nüwa using stones of different colours (gems maybe?). Another one is about Hsienpo and Yingt’ai. Who are star-crossed lovers who must wait until the rainbow appears to be alone together. Hsienpo is the red in the rainbow, and Yingt’ai is the blue.

Australia and oceana -The Rainbow Serpent is a huge python-like creature. However, the color of the creature tends to vary - some say that this creature is celestial blue, others say that it is multicolored, and others say it had yellow and red stripes down its body. The variations in color is due to the fact that there are many different areas that have the rainbow serpent as a part of their mythology - Australia, Congo, Dahomey, Haiti, Melanesia, Nigeria, Papua New Guinea, and Polynesia.

Indian - The rainbow is referred to as "Indradhanush" which translates to the bow of Indra, the thunder god and the king of gods (analogues to Zeus). And we say that he shoots lightning from this bow.

Bible - The genesis(9:13-17) tells that after Noah's flood got over god put a rainbow as a message of goodwill.

Armenian - It is a belt of Tir, which was originally a god Sun, and then - god of knowledge.

Norse - A rainbow bridge called Bifrost, which connects Earth with Asgard, home of the Norse gods. Bifrost can only be used by gods and those who are killed in battle. It is eventually shattered under the weight of war - the Ragnarok (German Gštterdammerung). The notion that the rainbow bridge to heaven is attainable by only the good or virtuous, such as warriors and royalty, is a theme repeated often in world myth.

Irish - The end of the rainbow is the leprechaun's secret hideout. This is where he keeps the pot of gold.

But for some cultures it's not all sunshine and rainbows! Rainbows can be a bad omen in these places.

Amazon - Rainbows were thought to cause skin problems

Karens of Burma - The rainbow is considered as a painted and dangerous demon that eats children.

Ancestral times in Japan - Rainbows were often viewed as omens of bad luck because they represented snakes.

Bulgarian legends - It is said that if you walk beneath a rainbow, you will change genders: if a man, you'll begin to think like a woman, and if a woman, you'll begin to think like a man. While most people in the capital don't believe in the superstition, some of them tease each other and joke around. They might also say "The sun is shining, the rain is falling, a bear is getting married".

Ancient Slavs - A man touched by the rainbow is drawn to heaven, and becomes a "Planetnik" - half-demonic creature - which is under the power of the thunder and lightning god Perun.

This question is answered on wikipedia:

The rainbow, a natural phenomenon noted for its beauty and mystical appearance, has been a favorite component of mythology throughout history. Rainbows are part of the myths of many cultures around the world. The Norse saw it as Bifrost; Judeo-Christian traditions see it as a covenant with God not to destroy the world by means of floodwater. Whether as a bridge to the heavens, messenger, archer’s bow, or serpent, the rainbow has been pressed into symbolic service for millennia. There is a myriad of beliefs concerning the rainbow. The complex diversity of rainbow myths are far-reaching, as are their inherent similarities.

I am not sure about the accuracy of the text though.

It seems to imply that rainbow is a good sign; this is not the case in Judaism, where the rainbow is interpreted as a message "you people are no good, and deserve destruction, but I promised not to do that so you get off".

Not the answer you're looking for? Browse other questions tagged religion science or ask your own question.

11
When did man understand the science of hail?
7
How did ancient mystery religions impact Christianity?
9
Why did science flourish in Germany after the First World War?
9
Why did Winston Churchill say “perverted science” in his Finest Hour speech?
8
Did the passage from Latin to English, in England, help science flourish?
4
What religions did Constantine convert to?
20
How did Christianity replace Roman Paganism and other ancient religions?