What does this Samurai crest mean?

Some years ago I was given something that I believe is called, in Japanese, a jubako. It's a multi-layered box and on the inside of the lid it features this crest:

When searching for information on it, I came across similar questions here so I'm wondering if anyone knows more about the crest (I have only been able to find the family name) or might be able to direct me to a resource that might have information about it, or even about the jubako?

This is the mitsuwari-ken-hanabishi (三つ割り剣花菱) crest, a rather obscure design used by the Aki Clan (安芸氏) of (surprise, surprise) Aki Dstrict in the Tosa Province of Shikoku. The Aki Clan is said to be descended from Soga no Umako, a powerful minister in Ancient Japan whose descendants were later exiled from the capital after a power dispute in the royal court.

Roughly translated, the crest can be called the Three Split Sword Flower Diamond, although it certainly doesn't look like a diamond. It is a variation on the more general hanabishi (i.e., flower diamond) crests, which are essentially diamond shapes composed of stylised flowers. This design originated as a decorative pattern, and has little deeper meaning. This is the first crest above.

One relatively common variation is to add highly stylised swords between the flower's petals. Known as 'ken hanabishi, i.e. "sword flower diamond", it is popular among the samurai families as a symbol for battle, martial virtues, and victory. The result looks like the second crest from the left above.

Another variation is to use multiple flowers and only show a part of each. This is called a wari-hanabishi, or "split flower diamond". This can be done in a number of ways, such as the third and fourth crests above, which have two and three splits respectively.

However, your jubako is probably only using this crest for decoration. As an unusual and relatively more elaborate crest, it is suitable for the hanabishi's original role as a decorative pattern. 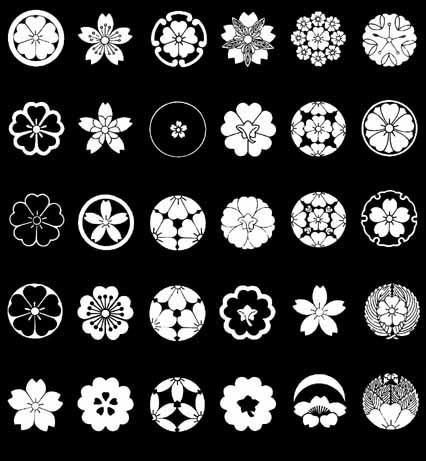 Some information: The traditional Japanese values of purity and simplicity are thought to be reflected by the cherry blossoms. In the aesthetic sense cherry blossoms are a symbol of transience and ephemeral beauty; they last briefly from about a week to ten days and then scatter.

Not the answer you're looking for? Browse other questions tagged japan heraldry samurai or ask your own question.

15
How many Samurai killed themselves?
12
Could rōnin become a samurai again?
9
What does this spear & carpentry square symbol mean?
16
What does the eighth samurai crest / symbol in this picture signify?
13
What became of the last samurai?
6
What is the meaning of this samurai crest?
6
How accurate is the fatalistic samurai culture in James Clavell's novel Shogun?
0
Can someone give me the history on this Japanese Crest symbol
4
Could someone help to identify this Japanese mon found on what appears to be a late Edo Period Jingasa?