What was the average size of French families during the Middle Ages?

My question takes place in at the beginning of the middle-ages in France. Let's focus on small villages and ordinary people (peasants, craftsmen, etc.).

I'm looking for an average estimation but I'm also curious about the variation of this number. Did people used to live alone or in couple? Did most of people lived with their family (all generation)?

Edit: I updated the localization and set it to France only. If it's still too broad let's say it's the south of the France.

As far as we can tell, Medieval French families were significantly bigger than modern western families - averaging perhaps around five to six. In contrast, modern France has an average household size of 2.38. However, they remained relatively small scale, and somewhat nuclear families of mostly two generations. Note the standard disclaimers apply: pre-modern demographic statistics are extremely patchy, and often must be interpreted with laborious reconstructions.

Nonetheless, the earliest available information on this subject probably dates to about the 8th Century. Around this time, surveys of estates began to appear that documented - with varying completeness - the households living off those lands. Of the surviving records from Medieval France, the largest and most famous is probably the Polyptych of Irminon, a survey of almost 2,000 properties in Saint-Germain-des-Prés.

Conducted by the Abbot of the eponymous abbey in the early 9th Century, it contained 1,742 households with over 8,600 inhabitants between them. Analysis of the Polyptych produces the following breakdown: 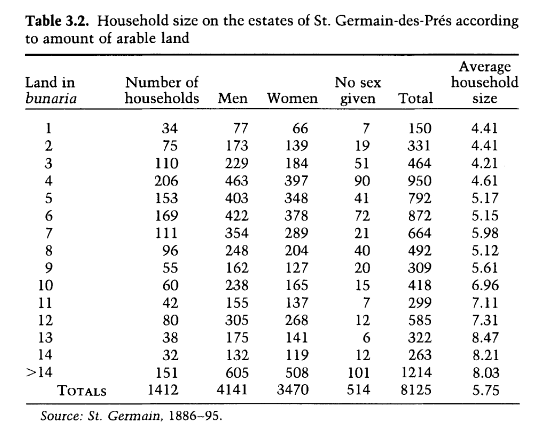 From this, the late David Herlihy calculated that:

The average size of the households on the lands of St. Germain is 5.75 persons, and the median size is 6.

A feature of medieval household sizes in Western Europe was that well-off families were larger than poorer families. This trend is illustrated in the above graph, where average household sizes nearly doubled as the amount of arable land in the estates they lived on went from lowest the highest. To some degree this would have been due to the need for additional manpower on larger estates, but it is also a reflection of wealthier families' ability to support more offspring through infancy and childhood. This contrasts with modern families, where the more well off tended to have less children.

In addition, the survey also revealed that the households at St Germain were predominantly laterally extended families. That is, there were more people from the same generation living together, as opposed to having more generations in the same household. Instead of grandparents living with their children and grandchildren, St Germain families were more commonly consisted of siblings and their children. A related feature is that, despite a somewhat high family size, the number of children was low - perhaps a product of late marriages.

"There is very little evidence of vertical extension, that is, over generations. There are only 26 grandmothers among the 3,470 women, and no grandfathers ... The absence of [the] three generational families, and of grandfathers, grandmothers and grandchildren, is thus striking.

This situation can be contrasted In Southern France, where the stem family system eventually developed during the Late Middle Ages. That pattern became predominant by the onset of the Early Modern period.

In northern France simple families predominated, but starting in 1350 stem and joint families appeared to be more common in Languedoc and southern France.

Its not France, but I imagine the situation would be similar to England. In the middle ages English families had a size of 5 on average, until the black death reduced it to 4 on average. Source

Not the answer you're looking for? Browse other questions tagged middle-ages france social-history demography family or ask your own question.

8
How "religious" was the average person in the Middle Ages?
7
What was the average size of a guild in 13th century Europe?
35
Did people use to marry much younger during the last millennium?
24
What did the people of the Middle Ages call their period?
4
How much of a effect did linguistic relativism play in ancient Europe?
7
What were the most common reactions to Rosa Parks and the Montgomery Bus Boycott?
3
How did the layout of a Medieval European village typically change as it grew into a town?