When and where, exactly, did the concept of a male god eating grapes orginate? 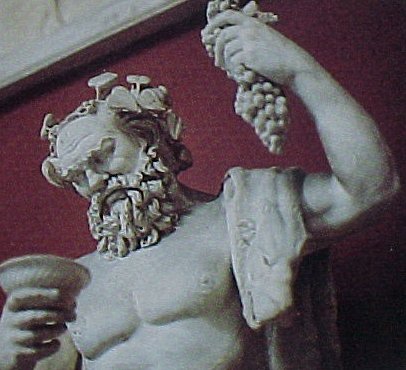 I am sure you have seen, somewhere, of a male god eating grapes or in some classical romantic settings, a half-naked woman putting grapes in the mouth of a half-naked man. I am very curious, where and when did this concept originate?

The god in question is Dionysus (or Bacchus, if you're from Rome), god of the grape harvest and wine, among other things.

The geographical origins of Dionysus are Greek. From the Mycenaean Linear B tablets, we know that a "DI-WO-NI-SO-JO" was known (at least) in Pylos before 1200 B.C. (source)

Homer's relative neglect of Dionysus, coupled with the location of his cult-places, had once led some to speculate that Dionysus "is in fact a fusion of a local Greek nature god, and another more potent god imported rather late in Greek pre-history from Phrygia (the central area of modern day Turkey) or Thrace."

Whatever the truth of these claims, the grape-nature-intoxication aspects of Dionysus wouldn't have come from his possible Phyrigian aspect, so some kind of Dionysus-with-grapes was likely a part of Bronze Age Greek religious belief long before the Homeric epics.

3
Nymphodorus of Syracuse
17
Where were the western legions when the Roman empire fell?
4
Where were Racka sheep brought to Europe from and when?
3
When did Herod the Great die?
10
When and where was rape first criminalised independently from adultery?
21
How did Christianity replace Roman Paganism and other ancient religions?
14
Is David Graeber correct to assert that patriarchy did not exist in Sumeria?
8
Where and when has Thucydides been studied?
4
What is the original source for Vico's reference to Varro counting 30,000 pagan gods?