What historical analyses are there to say whether or not the USSR really needed a second front (D-Day) in WWII?

I'm only generally familiar with the Eastern Front of WWII. My basic understanding is that the Soviet Union was pushed back to Leningrad, Moscow, and Stalingrad, before finally turning things around and overwhelming the Axis Powers. 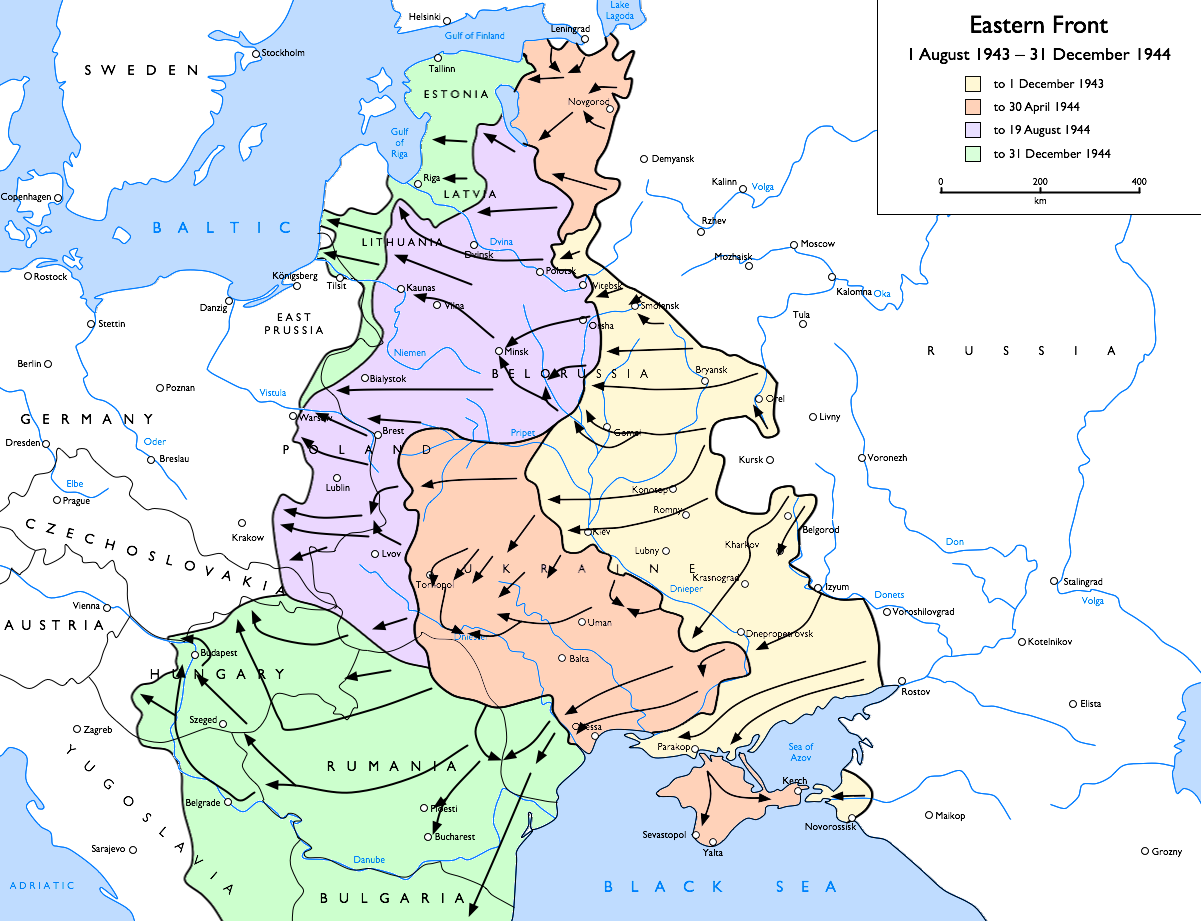 Judging from all this, did the USSR really need that other front opened up so late? (1944 Jun 06) In other words, by that point in time it looks like they would have just kept going and taken all of Germany, perhaps a little later than 1945 May 09, but taken it nonetheless. Is this true?

What I'm really hoping for are historical analyses (sources) that support or contradict this.

Your map is misleading, because of the time period illustrated. Certainly following the destruction of Army Group Centre (Operation Bagration, the purple offensive on yor map) in July and August of 1944 the absolute need for a second front had reduced. However the second front had already been established weeks earlier, tying down considerable German forces in France. It could be argued that the "second front", the necessity to defend the Atlantic Wall with substantial men and equipment, as a primary cause for the severity of the German defeats on the Eastern Front at this time. Nobody, lest of all Stalin and Zhukov, could seriously have predicted the sheer scale of German losses in July and August 1944 in this operation.

However the time period when Stalin was claiming the absolute need for a second front was one and two years earlier, when the Germans were threatening Moscow, Leningrad, and Stalingrad at the high-water marks of their invasion..

Just the other day I was reading an article by the Russian historian Boris Sokolov in which he wrote that without the Normandy landing which diverted a great deal of the Wehrmacht's resources the great Soviet victories of 1944 and 1945 might not have been possible and the war on the Eastern Front would have stalled.

Our people prefer not to thank the Western allies for help, but rather tell them off. In addition, if the Allies had not opened the second front in France in 1944, but had moved the Normandy landing to June 1945, the Red Army may have had to stop its advance at the extent reached in May 1944, having exhausted its manpower.

In his book Lost Victories, German Field Marshal Manstein stated that solving the crisis of the winter '42/'43 that resulted from a botched strategic campaign planning in the summer of '42 and became famous for the battle for Stalingrad and ended in the battle for Charkow was not a step to victory but marked the turning point from where on a military decision resulting in a victory was no longer feasible. Instead, the goal must be to achieve operational independence for the summer of '43 to beat and bleed the Russian army dry to achieve a good position for a peace negotiation. Obviously that goal was not achieved, even ignoring the fact that the German leadership would never have negotiated.

So this book has received a lot of criticism, but I think it does reflect Manstein's view on military matters or at least is consistent with other books written on that subject.

By the start of '43 even when the German army stood deeply in Russian territory, believing in a victory was foolish. Their military best case scenario was coming to favorable peace terms. Obviously you will not find this in official documents. That would have been "defeatism" and the offender would have been shot.

In the winter of '42/'43 the Russian army demonstrated that they were able and willing to defeat German armies in large scale operations and that the German army - just as in the winter of '41/'42 - had stretched to far and had suffered horrendous losses due to this mistake.

So yes, having more than this one front for example in Africa or later in Italy or even later in Normandy helped to keep much needed personal, equipment, transport capacity and air-power away from the eastern front.

I think it's safe to say that as an end result, more troops with better equipment under the same command and with the same strategic goals might have made a real difference in '41, and certainly would have cost the Soviet Union a lot more in lifes even later in the war, but by '43 and certainly by '44, the lack of manpower and material on the eastern front was a result of losing, not the reason. There was no realistic option to win the war against the Soviet Union by early '43.

The allied fronts certainly sped up the loss and helped to defeat Nazi Germany. But according to German military leaders account's, the war with the Soviet Union was lost anyway. It was only a matter of time if you did not believe in "Wunderwaffen".

For a first-hand account on how badly the Wehrmacht was mauled in '42 and up to the end, I can recommend the book "Vergiss die Zeit der Dornen nicht" (engl. title: blood red snow) by Günter K. Koschorrek.

This is only a partial answer but:

Strictly, the only way we can know what would have happened is to rewind history and run it again with variations i.e. we cannot know.

There is a tendency to view this only as a question of land fighting in Europe. Do not forget the US & to a lesser extent UK also fought Japan, which may or may not have saved the USSR from having to fight their own two-front war.

Also, the supplies the USSR received from the west by sea e.g. to Murmansk and the imports of oil and other materials denied to Germany by the mainly British naval blockade.

And the considerable diversion of planes, guns and manpower to the air defence of Germany due to US and British bombing, as well as the damage it did.

Impossible to say, if these things had not applied, e.g. exactly how many extra German planes, troops, tanks and guns could have been transferred to the Eastern Front or with what effect and ditto what reduction in forces the Soviets could arm.

PS before the ever-zealous (I am sure they mean well) "This answer does not quote sources" police on this website officially disapprove of this answer, I trust it is sufficiently well known that e.g. the USA fought Japan 1941-1945, there was an Anglo-American bombing offensive against Germany for much of the War etc. that it is unnecessary to quote specific sources?

30
Was the Italian campaign a strategic mistake?
5
What was the combat effectiveness of German infantry in the western front of the Second World War?
8
What evidence exists to say whether or not FDR was planning to use the Atomic Bomb just as Truman did?
12
Who advised FDR on foreign policy before and during WWII?
21
What was the liquor that was based on petrol which was produced in the USSR during the Second World War?
0
WWII - documents on turn around point in German Foreign strategy - "stop we are not going to pass Finland to USSR"
1
What are some good sources on the everyday life of Soviet troops during WWII?
2
Why was there a "workers' militia" in Eastern Europe but not in the USSR?