Did Russia declare war on Germany before its invasion of that country on August 7, 1914?

These are previously mentioned Russian manifestos. 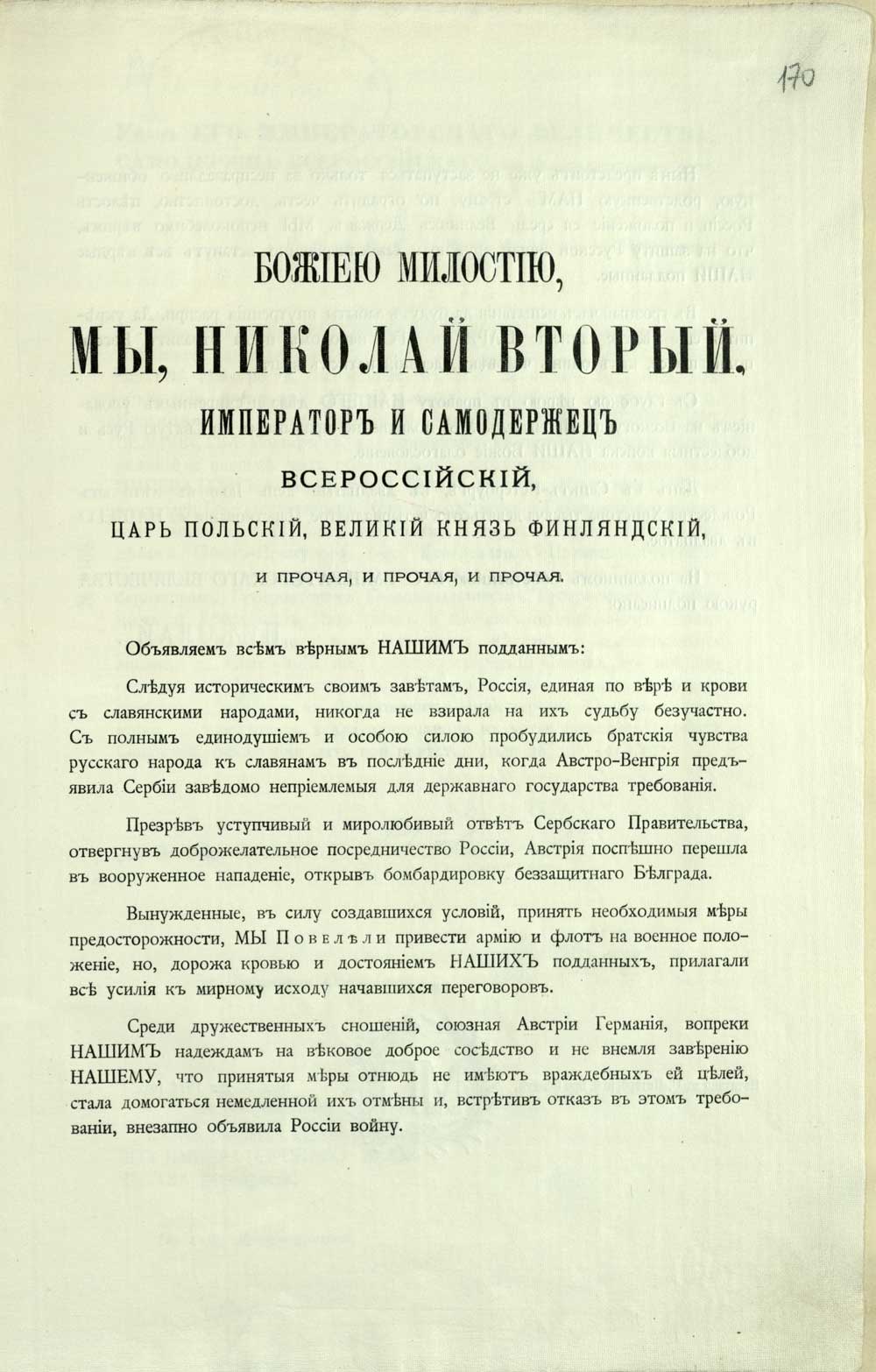 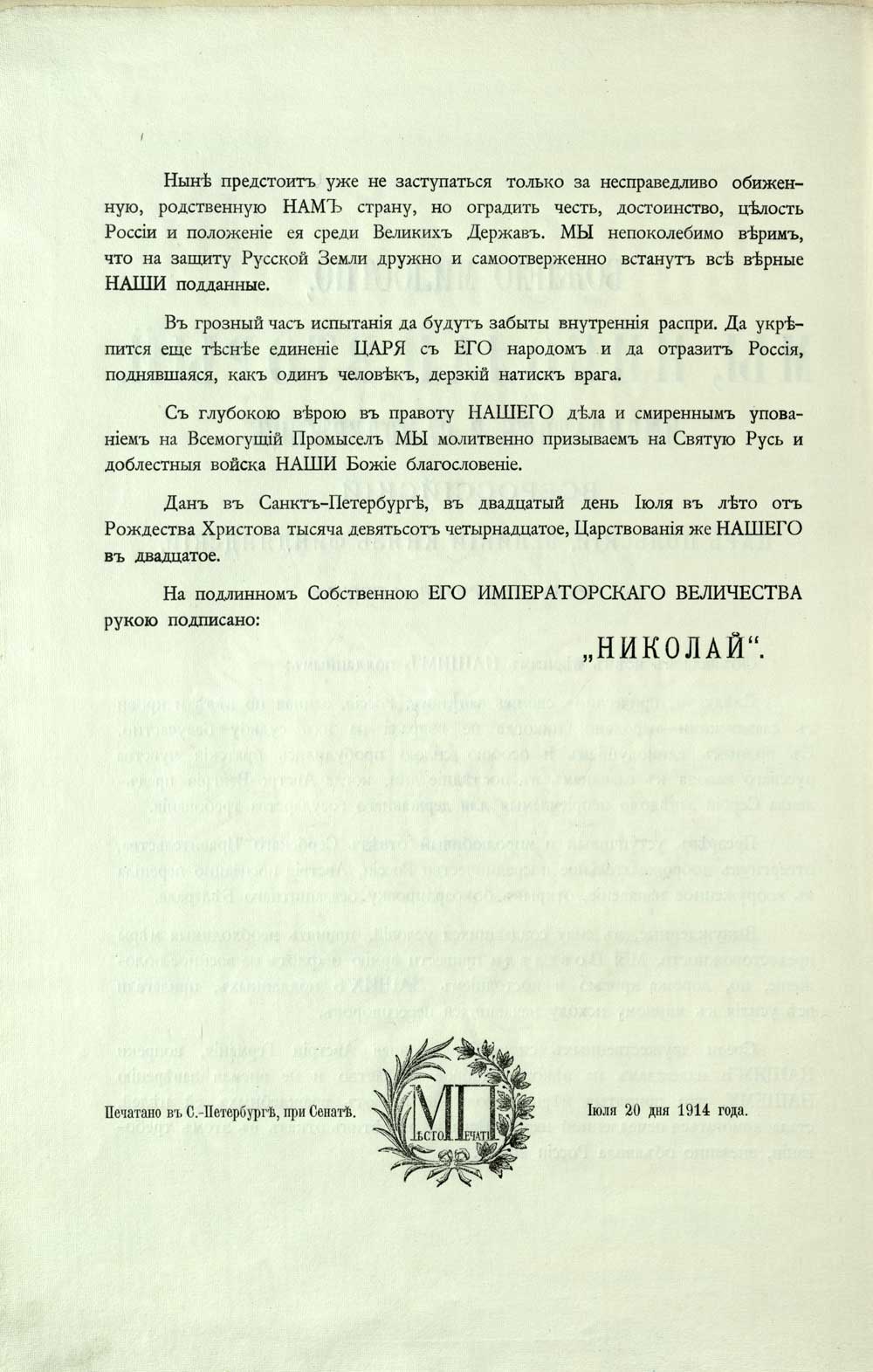 By the Grace of God,
We, Nicholas the Second,
the Emperor and Autocrat of All Russia,
the King of Poland, the Grand Duke of Finland, etc. etc. etc.
Proclaim to all Our loyals:
Abiding by her historical testaments, Russia, unified by faith and blood with Slavic nations, never stared at their fate blankly. With a full consentience and particular strength the brother feelings of Russian people to Slavs aroused in the last days, when Austria-Hungary imposed to Serbia wittingly unacceptable for a sovereign state conditions.
Despising compliant and peaceable answer of the Serbian government, denying benevolent mediation of Russia, Austria hastily moved to an armed attack by opening the bombardment of defenceless Belgrade.
Being forced under these circumstances to take necessary precautions, We have ordered to bring army and navy on a war footing, but, caring for Our loyals' blood and property, made every effort to reach a peaceful outcome of the started negotiations.
In the midst of friendly relationships, Germany, being allied with Austria, despite of Our hopes for age-old good-neighbourhood, and heeding not Our reassurance that the taken measures by no means have any intent hostile to it, started to seek for an immediate cancellation of them, and having met a refusal for this requirement, suddenly declared a war on Russia.
Now is not only to stand up for the unjustly offended cognate country, but to guard honour, dignity and unity of Russia, and its position among the Great Countries. We unfalteringly believe that all Our loyals will stand up selflessly and in concert for the defense of Russian Land.
In the terrible hour of trial, be any internal discord forgotten. Let the union of Tsar and His people become even more stronger, and Russia, rising like a single man, repel the bold enemy onslaught.
With a deep faith in the righteousness of Our deed, and with a humble hope for the Almighty Providence, We prayerfully call for a God's blessing on Holy Rus and Our valiant troops.
Given in Saint-Petersburg, on the twentieth day of July, Anno Domini one thousand nine hundred and fourteen, the twentieth year of Our Reign.
On the original by His Imperial Majesty's own hand signed: "NICHOLAS". 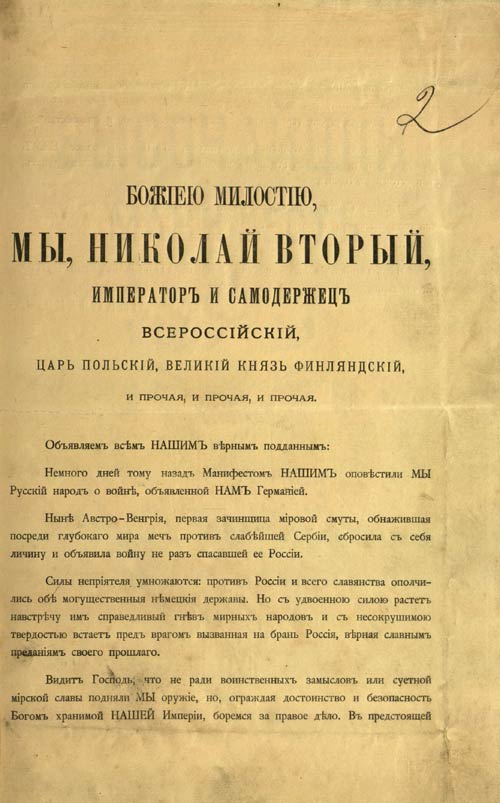 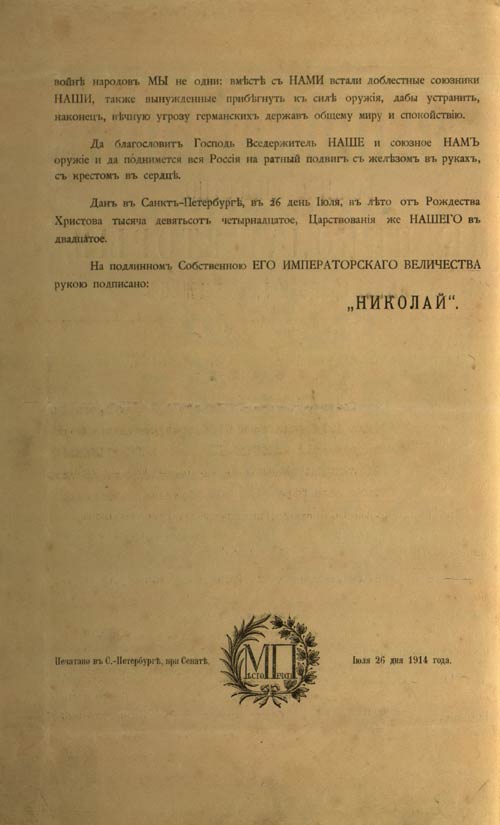 By the Grace of God,
We, Nicholas the Second,
the Emperor and Autocrat of All Russia,
the King of Poland, the Grand Duke of Finland, etc. etc. etc.
Proclaim to all Our loyals.
A few days ago by Our Manifesto We have notified Russian people about the war Germany declared on Us.
Now Austria-Hungary, the first ringleader of the world unrest, who in the midst of deep peace unsheathed sword against weaker Serbia, has thrown off the mask and has declared a war on Russia, who had saved her more than once.
The enemy forces increase: both mighty German states have risen up in arms against Russia and all the Slavdom. But with a double strength the righteous anger of peaceful nations grows against them, and with an unbreakable firmness Russia, being called for the battle, rises up against the foe, and keeps faithful to the glorious legends of the past.
God knows, neither for the sake of belligerent plans, nor for the vain glory of the world We have taken up arms, but, protecting dignity and safety of Our God-guarded Empire, strive for a just cause. We are not alone in the forthcoming war of the nations: Our valiant allies stand up with Us, likewise being obliged to resort to force of arms, in order to eliminate finally the standing menace of German states for a world peace and quiet.
May God Almighty bless Our and allied arms, and the whole Russia rise up for a feat of arms, with iron in hands, with cross in heart.
Given in Saint-Petersburg, on the twenty-sixth day of July, Anno Domini one thousand nine hundred and fourteen, the twentieth year of Our Reign.
On the original by His Imperial Majesty's own hand signed: "NICHOLAS".

P.S. Both translations are mine. Any possible mistakes are due to my poor English.

Yes. Tsar Nicholas II issued a manifesto on 19 July (i.e. 1 August, New Style) which is considered Russia's declaration of war against Germany. Made in response to the German notice, it was read to a crowd from the balcony of the Winter Palace in Saint Petersburg at 3 p.m. the next day.

I can't locate the original text, but here's a translated excerpt:

In the manifesto declaring war on Germany on July 19, 1914, Tsar Nicholas II declared: "In the terrible hour of trial, all internal differences will be forgotten and the union of tsar and people will be made even stronger, and Russia, rising like a single person, will boldly strike the enemy."

Germany had declared war on Russia on 1 August, in response to Russian mobilisation; Austria followed on 6 August. (timeline; text). There was presumably no need for Russia to make their own declaration after this point.

Not the answer you're looking for? Browse other questions tagged germany world-war-one russia international-relations or ask your own question.

34
Why did Italy abandon its alliance with Germany in WW1 and join the Allied side?
9
What was Poland's posture during the Seven Years' War?
6
Before the Great War, was the word "Poland" typically used to refer only to the Russian partition of Poland?
8
Why did Russia accept the legal framework that led to Kosovo's independence?
21
Was there a pre-determined arrangement for the division of Germany in case it surrendered before any Soviet forces entered its territory?
0
Did any UK declaration of war extend automatically to Australia?
4
Did the western Allies and Russia try to cooperate in World War I as they did in World War II?
3
What did Russia do in 1848 that could make the Austrians seek "brutal revanche" towards the Russians?
6
Was Russia ready for amphibious invasion of Istanbul in 1914?