Pinpointing the date of a globe

I'm trying to calculate the date a globe was produced, using as a source its features, i.e. the names of the nations, the borders, the capitals, anything else that could have changed with time. This, considering that some info might be incorrect, so multiple evidence would help.

If the Namibia's "independence" is correct, and Walvis Bay omission just a mistake, the year is 1990.

Assuming it's unreliable, or assuming I want more than once piece of evidence, currently it's 1975-1990: is there some other info I missed that I could check?

I'm arbitrarily deciding not to use other data, such as the name of the publisher, what I know about it, etc. Consider this an experiment I'm trying to do.

The 1990 date is very likely to be correct: as I said, consider this an experiment.

I've found this wikipedia page, which is precisely the list of "things I have to check" for this investigation.

It allowed me to raise the lower bound to be definitely 1984, and I doubt we can then get more precise than 1984-1990. Still, maybe I missed something, so better answers are welcome.

Its possible I can narrow it down further, due to there being no red box in the Pacific for the Trust Territory of the Pacific Islands. That puts it at 1986 or later. 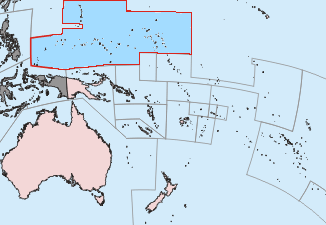 6
Information about the Kingdom of Raja Dahir of Sindh?
6
At what point did mapmaking begin to accurately reflect what we now know about the earth?
18
Is There A Term For The Old Maps That Had Lines Connecting Pin-Wheels?
14
What are the historical reasons for the conventional map orientation?
15
Was the location of the 180° line of longitude coincidence or deliberately chosen?
9
What was the most accurate map of the world before artificial satellites?
6
Are there any surviving maps from the Delhi Sultanate?
4
Where can I find a world map from the Victorian period?
3
When was the use of detailed maps for military campaigns widely adopted?
1
What were the divisions of the city of Paris between the 12th and 13th centuries?