Did the Romans ever deploy troops to, or try to conquer, Ireland?

The Romans obviously conquered Ireland's nearest neighbor, Britain (at least the southern part of it), but they seem to have stayed away from Ireland, at least as far as I am aware.

Is this the case, and if so, why did they abstain from military involvement in Ireland, when they were already in Britain, only a few miles away?

Ireland was not a threat to Rome

By the time the Romans had reached Britain, their empire covered most of western Europe and their resources were becoming stretched. For most of the time they spent in Britain, they were more concerned with holding on to what they had rather than expanding further.

Augustus effectively put a limit on the Roman boundary, for logistical purposes, Claudius invaded Briton some years later because there was Tin and also the Britons were still causing a nuisance to the Romans in Gaul.

There were no regular raids from Ireland, also it didn't have a specific resource that Rome needed, whereas Britain had Tin, Lead, and other developed mineral mines that were useful for Roman Empire traders and commerce.

To invade Ireland, the Romans would first have needed to gain full control of either Wales or the Clyde estuary in Scotland, something they never succeeded in doing.

The Romans very much wanted to conquer Ireland, because the Irish were a constant source of weapons and "rebellibus" support to the Scots and Welsh for attacks on Roman communities. During the fifth campaign of Agricola he reached partem Britanniae quae Hiberniam aspicit (the part of Britain that faces Ireland), but he never controlled it sufficiently to attempt a crossing.

During his invasion of Scotland, Agricola had to build a large number of forts, which has been great for archaeology, but not so great for the Romans, since it became very expensive to fend off the Gaels. This was the same in Wales, where a string of costly forts had to be maintained to protect against Irish-sponsored attacks. The graphic below, showing Roman and Gaelic forts, illustrates the line of control: 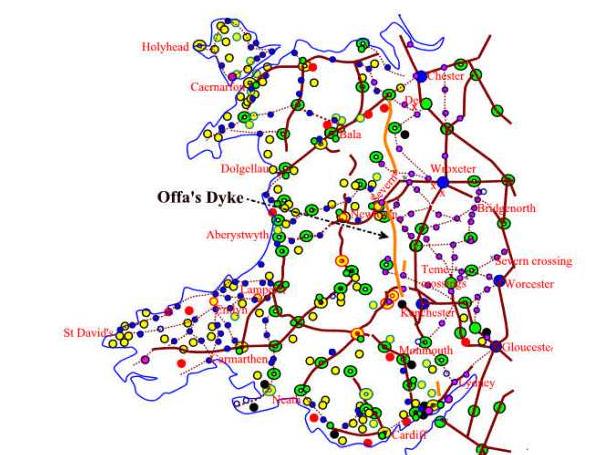 The green and violet is Roman; red, blue, yellow and orange Gaelighe. Although the large number of green dots suggest Rome might have controlled most of Wales, this is not the case. The solid line of control were the "castles" (the violet dots on the right), which were Chester, Wroxeter, Lanchester (mispelled as "Kanchester" in the map) and Gloucester. The other forts were in "allied" territory, which was semi-autonomous and not under full control (hence the need for lots of forts). The orange line of "Offa's Dyke" (a structure of uncertain history, shown on the map) shows where Roman authority more or less ended.

The Gaels were very keen to control the area because there are a lot of tin mines there, which is needed to make bronze, their main weapon material.

Ireland isn't "only a few miles away". The shortest sea crossings from Wales are Fishguard–Rosslare and Holyhead–Dublin, which are both 60 miles (100km). Scotland is closer: Portpatrick–Bangor is about 20 miles (35km). South-west England is about twice as far from Ireland as Wales is. The Romans never had sustained control of Scotland and didn't have control of Wales until around the time when they were already withdrawing from Scotland and consolidating behind defensible borders.

Also, these sea crossings are against the prevailing westerly winds and subject to bad weather at any time of year. There are strong currents and high tidal ranges. Crossing from Wales to Ireland is much more difficult than crossing from France to England and even that took multiple attempts.

Not the answer you're looking for? Browse other questions tagged ancient-rome roman-empire ireland celts or ask your own question.

57
Why were the Romans unable to conquer Germania?
22
What is the primary source for this quote by Julius Caesar's on Celts and Germans?
12
Did the Romans ever encounter the Vikings?
10
How did the Romans supply water in winter?
5
What allowed or prevented Roman conquest in terms of population, climate and geography?
6
Was Roman expansion & casus belli as just as they claimed?
25
When did the round house fall out of vernacular use throughout Britain and Ireland?
32
Did ancient Romans anticipate the fall of Rome?
6
Why didn't the ancients produce purple dye via admixture?