Before the imposition of Sakoku, did any Japanese people travel to Africa, the Middle East or Europe?

There are many accounts of Europeans who travelled to the Far East, as they called it. There were some Chinese people who made the opposite journey, did anyone from Japan do it? If they returned to Japan, what did they report about these faraway countries?

The most famous example is an embassy to Rome sent by several Christian daimyo from Western Japan. Consisting of four teenage envoys and a number of attachés, the group departed from Nagasaki on 20 February 1582 and reached Lisbon on 10 August 1584. In addition to meeting Pope Gregory XIII, the Japanese toured Spain and visited several Northern Italian city states including Tuscany, Florence, Milan, Venice and Verona. 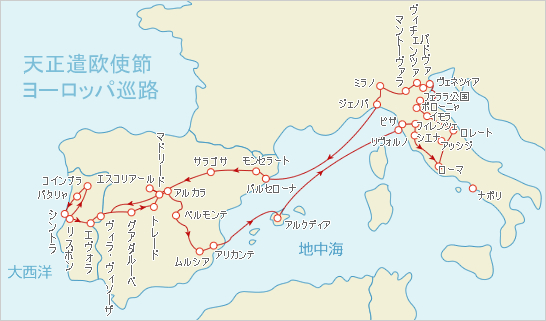 (Path taken by the Tenshō Embassy during their time in Europe)

During their return trip however, Toyotomi Hideyoshi - now master of Japan - issued the Bateren Expulsion Edict which effectively banned Christianity. This stranded the embassy in Goa for several years until they were allowed into Nagasaki on 29 July 1590. Upon their return, the embassy introduced Gutenberg's press to Japan, and later performed Western music to Hideyoshi.

This seems to be the earliest instance of Japanese visiting Europe in recorded history, though several similar expeditions followed in the succeeding decades. However, the edict of Sakoku was issued soon thereafter, putting an end to such projects. The last such expedition until the Meiji Restoration was another embassy sent by the Date clan of Sendai.

In this case, the Japanese went east and reached Europe by crossing the Pacific and Atlantic Oceans. This was the first recorded instance of a Japanese reaching the Americas. Notably, the envoy Hasekura Tsunenaga compiled a collection of documents on his experience. These have now been designated a national treasure, and included on the UNESCO Memory of the World registrar.

Not the answer you're looking for? Browse other questions tagged japan travel or ask your own question.

16
To what extent did the CPC avoid fighting with the Japanese?
6
Did Mao Zedong and Chinese communists collude with the Japanese during the Sino-Japanese War?
11
Did any civil resistence against the allied occupation of Japan exist?
10
Why were so few Koreans enlisted in the Japanese Army before conscription was introduced in 1944?
5
Why do schools in Taiwan, Japan, and South Korea use the Westminster Quarters as school chime?
0
What quality were Japanese troops in Japan in 1945?
22
How did bank transactions (or "data" transactions) work when it took people weeks to travel vast distances?
33
How long was a sea journey from England to East Africa 1868-1877?