The recent news about the Koreans got me intrigued so I looked up images of the DMZ and it got me wondering... 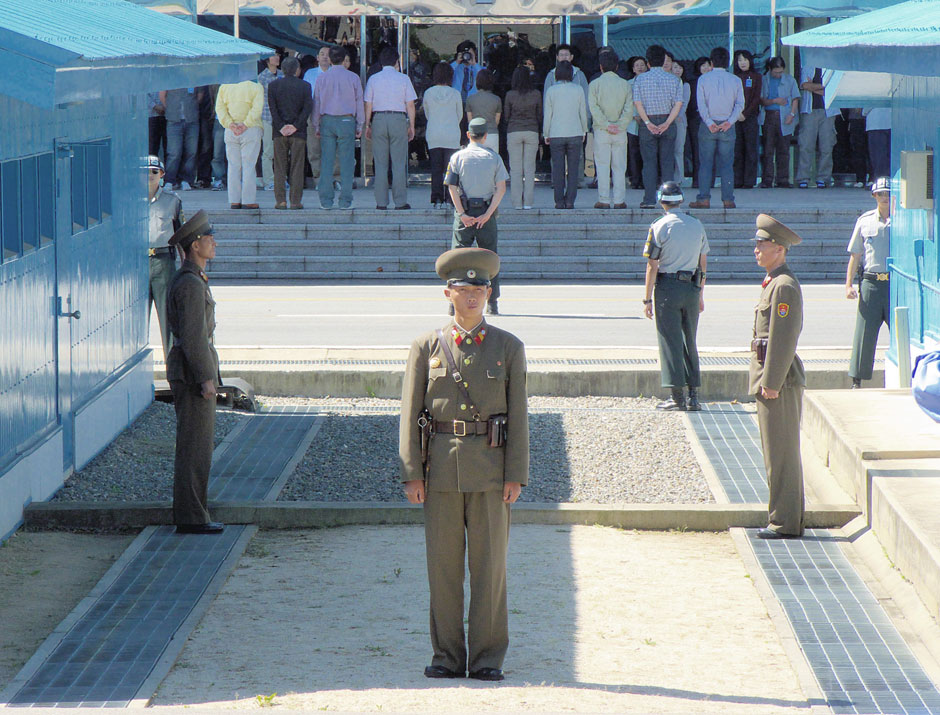 Is there any historical significance to the questions above?

(I'm not sure if this is on topic here but I figured it relates to the Korean War.)

After reading Anwar's answer I did some more research and can confirm parts of his answer and since @Congusbongus said Anwar's answer seems entirely speculative I would like to add to it.

Why do the South Koreans stand the way they do?

The ROK soldiers stand in a Taekwondo fighting stance to react to anything that may happen. In fact all ROK soldiers are hand selected, have to meet a height requirement and hold black belts or higher in Taekwondo and other martial arts.

They wear sunglasses to show no emotion to the North Koreans.

They hug the wall to keep an eye on North Korea but at the same time able to reach for cover if they are to be shot at.

Why do the North Koreans stand the way they do?

I wasn't able to find any concrete evidence to back up Anwar's answer however it seems logical.

How long does each soldier stand guard like that? I'm sure they take shifts but I can't help but wonder what each soldier is thinking when it is his shift... "OMG, this is boring."

You can check out this Youtube Video. At around 5 minutes you can hear a US soldier describe the information I said above which should be credible!

Not the answer you're looking for? Browse other questions tagged military korea korean-war or ask your own question.