Why didn't China assist in the Vietnam War like they did in Korea?

In the Korean War (1950 - 1953), China sent in about 1 million troops fairly quickly and actually fought the American and UN forces. In the Vietnam War (1950's - 1975), the only Chinese assistance I could find was a few thousand troops sent to do repair work on military bases. They did not fight the South Vietnamese or Americans.

EDIT 2: I have since learned that the Chinese actually sent over one hundred thousand troops into Vietnam. It appears they did fight the Americans in an anti-aircraft role from the ground. Nevertheless, this does not seem anywhere near equivalent to the ground war in Korea where their goal was presumably to reunite the Korean Peninsula.

Why did China support the one but not the other? They were both neighboring states of China. There are also two facts about the Korean War that I find critical: (1) The US had the atomic bomb in the 50's, but China intervened anyway. (2) Mao Zedong was in power with a "healthy" cult of personality and could have ordered just about any war he wanted, at least with a nearby country. These two facts remained the same in the Vietnam war.

So why did China not assist North Vietnam in a similar scale as they did in Korea? Did they perhaps know the US could never win in such a quagmire and thus didn't have much to worry about?

Everyone learnt from the Korean War and wished to avoid a repeat of a bloody direct Chinese-American fighting. At the onset of the escalated American involvement in 1965, Beijing made it clear where the Chinese line in the sand is:

The message was clearly received in Washington D.C., where American leadership were no more eager to fight the Chinese against. The United States thus undertook to avoid crossing that line.

The near-certainty of a second war with China deterred the Americans from taking the ground war beyond the 17th parallel.

Now, there is definitely some controversy over whether the Chinese were bluffing, and whether America should have, or could have, invaded North Vietnam to secure a quick victory.

The decision of the Johnson administration not to invade North Vietnam, then, was based on a correct evaluation of the threat of direct Chinese military intervention, as well as on a well-informed gear of provoking a Soviet-American confrontation.

In contrast, revisionists dismiss the Chinese threat and lambast the American leadership for not taking the ground war to Hanoi.

General Dave Dave Richard Palmer writes: The Johnson administration had already barricaded the one sure route to victory - to take the strategic offensive against the source of the war. Memories of Mao Tse-tun's reaction when North Korea was overrun by United Nation troops in 1950 haunted the White House ... Summers contends that the US was "bluffed" by China.

Regardless of hypothetical scenarios, ultimately the United States never attempted a ground invasion of North Vietnam. Thus, bluff or genuine promise, China was never confronted with the choice of whether to follow through with their threat of intervening in Vietnam.

Whether Peking's threats were genuine or not, American presidents prudently refused to risk such high odds. North Vietnam remained inviolable to ground attack.

That is not to say China didn't assist the North Vietnamese. Even though China and America did not end up engaged in open warfare, large numbers of Chinese soldiers and military materials flowed into Vietnam. In fact, at the peak of China's involvement, over 170,000 Chinese military personnel were in North Vietnam, not to mention much needed equipment and supplies.

Between August 1965 and March 1969, sixteen Chinese anti-aircraft divisions, amounting to 150 000 personnel, operated in North Vietnam. The total strength of Chinese troops in the DRV reached a peak of 170 000 in 1967. 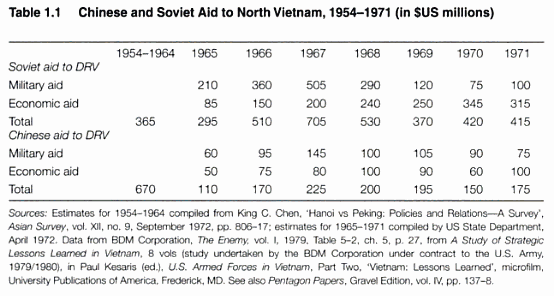 Related: It's worth noting the little (apparently) known fact that the Chinese and Vietnamese held Vietnam Warr part 3* between themselves after the end of part 2 with substantial losses on both sides. (*Part 1 - with France, part 2 with USA).

Significant disgreements exist to the present and various "incidents" involving deaths on both sides (mainly offshore) occurred over decades.

There is an interesting website here (Googlabet translate does and OK job for those who do not speak French. The Paracel Islands, a continuing conflict I became more aware of the issues involved after being asked for permission to use one of my photos of the Paracelles* by a Quebec university. At the time I imagined it was tourist or marine related and only recently discovered the actual use. (Mine is the pretty blue photo and maybe also the rice terraces)(maybe not the latter.

From that site: - translated from French by Googlabet.

April 25, 2013,The states surrounding China Sea vie long control of maritime territories. The conflict between China, Taiwan and Vietnam around the Paracel led to renewed tensions in recent times. .... A question arises: what is the interest of controlling these islands so small and distant? The answer is: the conflicting states want to ensure control over an important commercial fishing area which is also suspected of overflow of hydrocarbons. The control of this archipelago also offers an advantageous position in the strategic plan regarding the safety of sea lanes and the projection of naval power. 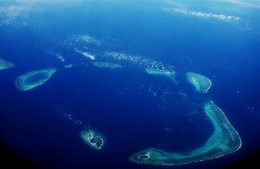 *Photo taken on a flight from Hong Kong to Singapore - flight path reached almost to Vietnam about half way down "North" Vietnam then followed coast down. We flew across the Paracelles en route. Larger version click image twice to enlarge further

May 2015 Ask The Vietnamese About War, And They Think China, Not The U.S.

May 2014 Are China and Vietnam on the Verge of Another War?

Soviet-Chinese relations were at the lowest point at the time of Vietnam war. Even if the Vietnamese government wanted to get full support from the two sides, they would have to choose. And for many years since then the Soviet Union and Vietnam were allies not only against the US but against China too. A strong Vietnam was the reason for China's failure in Cambodia (Sino-Vietnamese war mentioned above).

So it's just a common mistake thinking that all communist states were dreaming of fighting together against "evil American imperialists". In reality they had different aims and policies (not counting Eastern Europe, of course).

On the other hand, Korea was kind of a backyard for China, so it's not surprising they support North Korea now and then. And unlike Vietnam, keeping good relations with North Korea was a priority for China despite Soviet influence on it: China even ceded some territories to North Korea in the sixties.

Actually China did assist Vietnam. China didn't just send a few thousand troops to repair bases. China actually sent hundreds of thousands of soldiers to help the north Vietnamese air defence. The Americans believed they could bomb north Vietnam into submission without sending ground troops into the north. So the Chinese troops were actively fighting to defend north Vietnam from the main type of war that the north was experiencing.

The Vietnam War was a more "limited" war than the Korean War. In Vietnam, the United States was not fighting to "unite" Vietnam as it was in Korea; the U.S. was "only" trying to keep South Vietnam independent of the North.

As a result, U.S. ground troops were stationed in South Vietnam, but did not invade North Vietnam. There was no direct threat to the Chinese border as was the case in Korea. So China didn't feel the need to "officially" deploy troops in North Vietnam (although there were a number of "volunteers" providing mainly technical assistance.

Both sides had learned something from the ferocity of the Korean war. So there was a tacit agreement to keep American (and therefore Chinese) troops out of North Vietnam, and limit the fighting to the South.

Not the answer you're looking for? Browse other questions tagged china international-relations vietnam-war korea vietnam or ask your own question.

28
Why did the United States not invade North Vietnam?

28
Great Wall of China Controversy
9
Did many Nationalist Chinese soldiers fight in the Korean War on the Communist side?
7
When the Chinese were driven out of modern Vietnam in AD 938, did an Vietnamese ethnic identity already exist?
4
Was there any official affirmation from the US government that they would win the Vietnam War?
6
Did Vietnam have to pay back the Soviets / China?
1
How did the the Soviet-China near-war in 1969 affect the supply of arms to North Vietnam?
1
Why didn't the Chinese attack Hungnam during the evacuation?