What words were obliterated from the Great Colonnade at Palmyra?

One of the columns at the Great Colonnade at Palmyra features a dedicatory inscription to Zenobia and Odaenathus. It is bilingual, recording the same text in Greek and Palmyrenean: 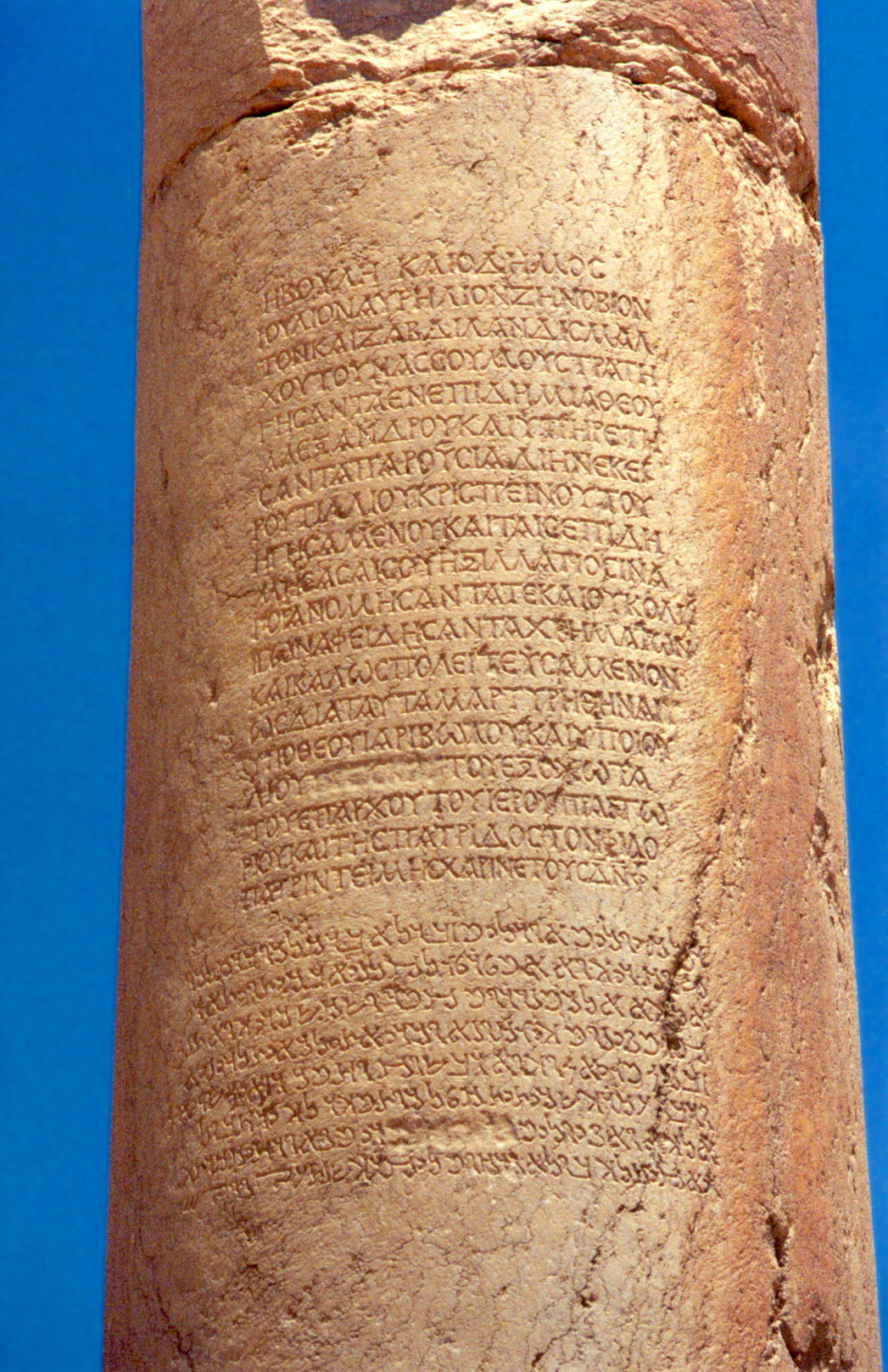 It appears that one or more words near the end of both texts have been obliterated. Was this deliberate? If so, what words are missing, and why have they been erased? Is this an instance of damnatio memoriae?

The letters in brackets have been inferred and the entire bolded part was effaced. This inscription reads as follows in English:

"The Senate and the people have placed this in honor of Julius Aurelius Zenobius and Zabdilas, the son of Dichmalchus, the son of Nassumus, commander at the time of arrival of the divine Alexander, who provided help for governor Rutilius Crispinus and his visiting expeditionary force; overseer also of the distribution of corn, a liberal man, not sparing even of his own private property, and conducting his public service with distinction, so that he has been blessed by the god Jaribolus and by Julius Priscus, the most illustrious prefect and sacred praetor, and also a great lover of his country, in the year 554."

"Alexander" refers to Marcus Aurelius Severus Alexander Augustus, known as Severus Alexander, emperor of Rome 222-235 AD. Rutilius Pudens Crispinus was a Roman senator and general who served under Severus Alexander and administered Syria. Gaius Julius Priscus was the Procurator of Macedonia and was appointed the Praetorian Prefect of the east when his brother, Marcus Iulius Philippus Augustus, became emperor in 244. The year of the monument, 554, is given in terms of the Seleucid Era and equates to our year 244 Anno Domini in the era of Dionysius Exiguus.

The word Priskou is effaced in both the Greek and Palmyrene inscriptions. The likely reason for this was that Priscus ruled Syria very harshly and became widely hated during the reign of his brother. Approximately five years into this reign, Marcus Jotiapanus led a rebellion in Syria and overthrew Priscus. The name was probably erased at that time.

Not the answer you're looking for? Browse other questions tagged ancient-history architecture greek syria or ask your own question.

1
How to cite sources in a way thats translateable

33
Was Alexander the Great Greek or Macedonian?
1
How were the Incas able to build such great works of architecture without using mortar?
9
What jobs were available for migrants from the country to Rome?
4
What was clothing in ancient Palmyra like?
3
What did the Musa Dagh monument look like?