Why does the Star of David feature on these African coins from 20th century?

Why does the Star of David feature on these African coins from 1936 and 1959? 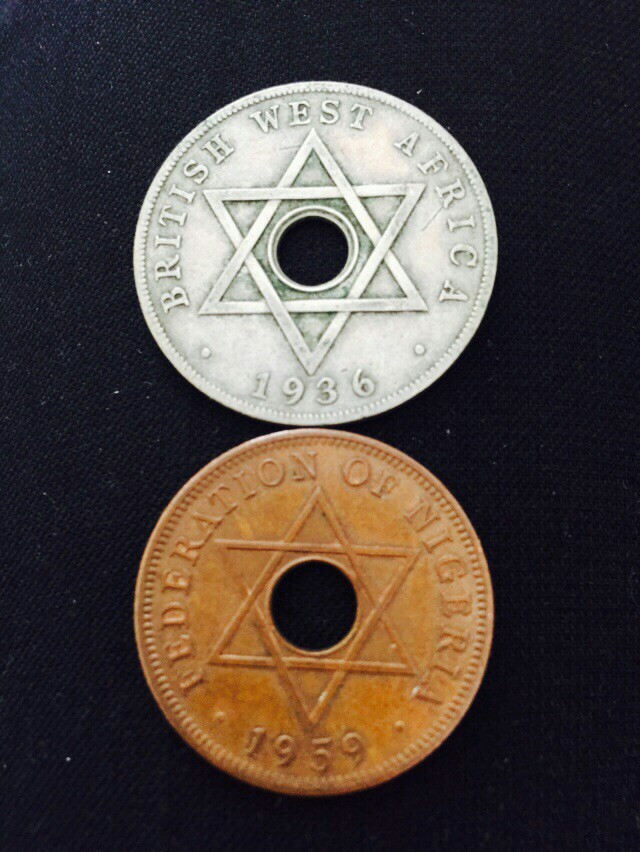 The hexagram already appeared on the historical flag of nigeria (british colony and protectorate). Both coins date from that time, since Nigeria got independent in 1960. So, i think the question should be why the hexagram was associated with Nigeria during the epoch before 1960. Extensive information regarding this question can be found at http://www.crwflags.com/fotw/flags/ng-gb.html. According to that page, it may be due to jewish influence transmitted by the ethnic group of Igbo (Ibo), and/or it's a "traditional Ibo/Igbo symbol". To be honest, i can't judge if this explanation is accurate...

Anyway, since the hexagram was used to distinguish the colony of Nigeria by British authorities, it seems quite natural to use such a distinct and "easy-to-draw" symbol to distinguish coins from pre-1960 Nigeria from those coined in other British colonies in Africa.

First of all this is NOT the Star of David, it's the Seal of Solomon.

The seal of Solomon has interlaced triangles unlike the so called star of David.

Secondly, the Hexagram is a very ancient symbol used throughout the world BEFORE Hebrews and Zionists.

Thirdly, the so called star of David was adopted quite late - no earlier than the 11th century as a Jewish symbol.

There are West African populations - Yoruba for example - with Canaanite roots which could serve as an explanation for the appearance of the seal on the coin.

Not the answer you're looking for? Browse other questions tagged british-empire africa numismatics or ask your own question.

10
Were Roman emperors in the first century AD shown as holding stars in their hands?
5
Please help to identify these coins
8
What is the largest hoard of coins ever found?
4
Identify two Medieval Indian coins
9
Why does some Califate money feature crosses?
7
Does any of John Sutter's tin money survive?
9
When and why did round coins become a practical standard?
8
Why did the coins of England minted under Richard I and John bear the name of Henry?
11
A common find of metal detectorists across Britain is the silver “love token”, from around 1700. Do any contemporary sources describe the custom?
29
Please help identify these old coins found in Germany?