Was the transition from the Bronze Age to the Iron Age violent?

In Europe, when the Bronze Age ended and the Iron Age began, was it a peaceful spread of technology, or was it a violent conquest where the newcomers were able to win by their more advanced technology?

The problem with answering this is that Europe for the most part was illiterate at the time.

We do know from the literate areas that there was tremendous upheval in Fertile Crescent at about this time.

In this period the (illiterate) Dorians wiped out Mycenean civilization, plunging the Greek area into a dark age. Technically this was Europe. Then a horde of sea peoples (many speculate displaced Myceneans) took to raiding south into the Levant and Egypt. Egypt was mostly strong enough to beat them back, but the peoples of the Levant weren't so fortunate. The Hittite capitol was destroyed (actually not sure by whose hand, but sea peoples are a leading guess), and its empire collpsed. Some of the remnants (so-called neo-Hittites) marched out and conqered Babylonia, along with the Aramaeans (essentially Arab pastorilists from the south). Many also speculate the sea peoples were the Biblical Philistines, who according to the Bible attempted to ensure Israel's continued military inferiority by denying them access to iron.

All of this upheaval could have been a coincidence with the popularization of iron, but I generally don't believe in such large coincidences.

Also we know that in sub-Saharan Africa, the Iron Age appears coincident with the period of Bantu expansion, where speakers of that language family took over all cultivatable land in the tropical peninsula of the continent (a huge area). You could picture this process as a peaceful one, but when Europeans later bumped into the southernmost tribes of this movement (the Zulu), they didn't find them all that peaceful.

The rise of the Phoenicians (later Carthaginians) in North Africa roughly coincides with the period where they were the only iron users in North Africa.

Checking over my sources for darker (illiterate) Europe, there doesn't seem to be any serious cultural changes associated with the switch to Iron use. So it could be that in this zone Anixx's reasoning in his answer applies. Or it could just be that what did happen wasn't all that apparent to archeologists.

The transition from Bronze Age to Iron Age in Europe occurred later than the transition in the Middle East. It started in the south and gradually worked its way north. It was most certainly a period of bloodshed, but then that's been true of most of european history, hasn't it?

You might imagine pitched battles of armies, one outfitted in old bronze swords facing down adversaries all wielding new iron swords thanks to their closely guarded secret iron smelting technology, the latter of whom proceed to decimate the bronze users, slicing swords in half and so on. But... this probably didn't happen.

Iron is actually a rather poor material for weapons, particularly early on when iron smelting knowledge was weak. Swords would be liable to bend or break. Yet bronze weapon manufacturing had been perfected after many centuries of use. So, an all-bronze army could well have been the one doing the decimating. Iron was what you used if you couldn't get bronze! Who'd bother keeping that technology a secret? It wasn't until the invention of the blast furnace in the Middle Ages that steel (a much better weapon material) could be reliably produced.

Iron didn't come into its own until bronze was already largely off the scene. The early and middle bronze age had seen some noteworthy empires around the Mediterranean, but these fell and the area descended into a major dark age. Trading routes were disrupted throughout Europe and the Middle East so many simply could not get copper and/or tin. In Europe civilization fell apart, populations dropped, and government reverted back to tribal units and petty kingdoms.

Iron's advantage was that its ores were very easily accessible. And while the smelting process was more difficult, once learned it would allow mass production of iron items. It didn't matter if the bronze weapons were as good or better, if you could field ten times as many armed men.

In Europe, the Greeks and later the Celts marked the start of transition from bronze to iron. These groups both were tribal people that expanded across Europe bringing an array of new technologies that enabled them to displace more primitive peoples. Their armies used a mix of bronze and iron for their weaponry. 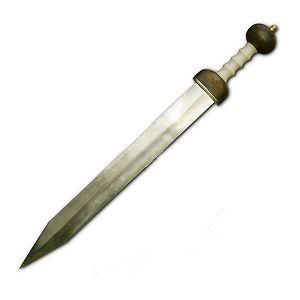 Initially, iron weapons would be kept short to minimize bending or snapping. Even as late as the Roman Empire, the Roman Gladius was generally made out of iron; officers might even stick with bronze swords. Occasionally luck or trial and error would result in production of steel; steel is a much better material for weapons than either bronze or iron and as such was prized (and production techniques closely guarded). However in Europe it would not be until the development of the blast furnace in the Middle Ages that steel became common enough to outfit armies with it.

I do not believe that advances in metallurgy could give some societies any crucial military advantage. This is because iron weapons are easily captured and bought. Even if a society had no iron works, it still could easily acquire iron weapons and the archaeological findings support that there are plenty of foreign-produced metal weapons (mostly produced by Tripolie culture and in Anatolia) say among the Kurgan cultures who had inferior metallurgy at the time.

When it comes to other technologies such as the chariot, this is not the case because a people who have no experience of dealing with chariots can hardly make use of them even if captured.

Unlike iron weapons which are used mostly the same way as bronze ones, chariots require special skills for maintenance and combat tactics. They are useless in smaller numbers and require extensive horse breeding which was mostly unavailable in agrarian societies.

I have worked iron and steel in coal forges and propane forges as a farrier and I have also made knives. I also designed and cast bits in German Silver (an alloy of brass that has been around since the time of Moses) and in sweet iron (cold rolled mild steel). We would assume the early forms of iron had massive amounts of impurities or slag. This would cause failure in the stress of battle and swords would break like glass. Iron without carbon is soft, it won't hold an edge, and it will bend, which probably is one of the reasons short swords were used. The longer swords were more vulnerable to failure and bending.

The reason I say the alloys for bronze or brass were around since the time of moses is because the main alloys all have biblical names. Bronze was cast in sand and it was fairly easy to mass produce weapons. Once they were cast, they were cleaned up, a handle was attached and the blades were sharpened. Henry Ford had nothing on these guys. They could also cast pieces as large as a pickup truck if you do a little more research.

Iron is harder to put into production in my opinion because of impurities. The temperature for heating and cooling are critical. I am just a history man, but I have some practical experience as well.

As a academic myself, let me say this..."Academia could learn from those who are experienced with the subject matter"..., hands on so to speak. Like the farrier above who actually works with the product of these people's discussion instead of taking as valid only those who discuss and possibly disgust those listening politely.

Science begins with the one WORKING and speculating about their work...not the person watching and commenting on the actual endeavor. It's not the curious intellectual who began metallurgy and even the transition of the Bronze to the iron age...but instead it was the smith's and farriers who thought and improved their crafts...not the intellectual who thought himself better.

That being said, the iron age didn't begin in the south of the Levant and "work" it's way northward as a previous post implied. We have records found in Hattusa and letters between the Hittite king and a vassal king where the Hittite king (Hattusa in northern Anatolia) is sending what he calls "good iron" to his vassal king as a gift along with a good iron dagger, and this was well within the so called "bronze age".

28
Have there been any notable battles fought with steel vs. bronze weapons?

14
How large were Bronze Age settlements?
20
How was life in the Iron Age different from life in the Middle Ages?
28
Have there been any notable battles fought with steel vs. bronze weapons?
17
Was there a bronze age in the Americas?
2
How was the start date of the bronze age determined?
2
Was there any Empire that only used bronze?
18
When did Aurochs (large wild cattle) become extinct in Britain?
9
Are there examples of stone age cultures living in proximity close to iron age cultures without adapting to metal use?
5
Did bronze metallurgical development peak by the end of the bronze age?