Why did fighter pilots wear their hats lopsided during the World Wars?

In many photographs of flying aces of the two World Wars, they wear their hats in a lopsided manner instead of straight. Here's photos of Albert Ball, a British WWI era pilot, and Erich Hartmann, the German fighter ace from WWII. 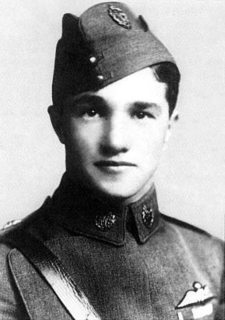 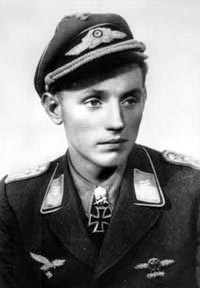 When did this tradition of slanted hats originate, and is there a known reason for its prominence during the World War era?

In the case of Albert Ball, he was simply wearing his side or field cap in the manner that was usual in many armies of the time. See also the Glengarry.

In the British Army, the first cap to be adopted of this style was the "Glengarry", which was authorised for all British infantry regiments in 1868...An all-khaki version [of the cap] was also selected in 1912 as a practical head dress by the fledgling Royal Flying Corps that went on to become the Royal Air Force (who continue to use the same type of cap to this day).

Prior to 1945, glengarries were generally worn steeply angled, with the right side of the cap worn low, often touching the ear, and the side with the capbadge higher on the head. The trend since the end of the war has been to wear the glengarry level on the head.

The RAF had the reputation of being the glamour service in WW2.

Fighter pilots, especially, had the kudos, in some cases, of pop singers - popular with the women and a jaunty self-confident air about them. Their breezy air said a lot about how they wore their caps.

RAF personnel generally were nicknamed The Brylcreem Boys - *Brylcreem being a popular brand of hair cream for men.

The model in the advertisement is of course Denis Compton, the England and Middlesex cricketer - who had something of the breezy, sports-car driver air about him too. Wonderfully elegant stroke-playing batsman that he was, he must have made vastly more from Brylcreem than ever he did from cricket. (he also won a football FA Cup Winner's medal, playing for Arsenal.)

The WAAF (Women's Auxiliary Air Force) also had a bit of the glamour attached to them too. they were known as Waffs. The word is usually spoken by old airmen with a twinkle in their eye.

Not the answer you're looking for? Browse other questions tagged world-war-two military world-war-one clothing or ask your own question.

8
What uniforms did each of the American Civil War regiment wear during First Bull Run / First Manassas
31
Why was Switzerland not attacked during the two World Wars?
4
The role of the two world wars in the evolution of Fordism
19
Were soldiers in the World Wars paid?
15
What happens to the corpses after the world wars?
51
How did pilots know when to release bombs on airplanes during World War2?
13
Did 20th century militaries have their own fire-fighter units?
6
Did RAF fighter pilots wear ties while flying in WW2?
3
Why would 19th century parents make their infants wear corsets or stiffened bodices?