What is the origin of the English Ship Building Philosophy?

I was reading an article on the Vasa the ship built under command of King Gustav Adolf, the ship sank during its launch on August 10, 1628. Part if the article mentions that the ship was somehow unbalanced and the idea proposed is that it was built with two different philosophies. One of which is the English/Mediterranean version which supposedly were built around frames with well structured and precise measurements for the planking, the other half of the ship was supposedly done by the Dutch method which just built the ships quickly from the bottom up.

I can kind of understand the Dutch version, at least from a land perspective where like a house you can craft something from the bottom up and use what you have; which is the suggestion of the Dutch method. But what would be the origin of the English method which obviously meant a more involved process with craftsmen and some serious education to deal with the mathematics it would take to design the ship before it was built. In some ways I'd almost see this as going back to the early civilizations in Europe (like the Romans or the Greeks) with the knowledge passed down or evolving over time. Would this be the case or did this arise out of a later time?

In Europe there were historically two ways to build ships. Wikipedia refers to them as Clinker and Carvel. Carvel originated in the Mediterranean while Clinker was more typical in the Atlantic. Clinker-built requires less caulking so is more lightweight and simpler to build, resulting in a flexible hull well suited for the rigours of ocean travel.

However, the flexibility is a disadvantage the larger the ship is, especially if it needs to support complex sailing rigs such as for lateen sails (which are necessary when sailing across or close to the wind.) Thus, for the large sailing ships that were to come, the more complex Carvel-built became necessary. 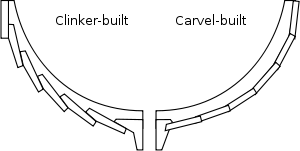 Primarily the team of John Hawkins and Mathew Baker.

Hawkins had made several transatlantic voyages in the 1560s using typical English ships for the time. They were ok in the North and Irish seas, but the design was not well suited for the blue waters of the Atlantic. He came back determined to design something new.

After some domestic adventures which are not relevant here, Hawkins struck a bargain with the Queen to build and refit the Royal Navy on a fixed price contract. He tapped Baker, a young ship designer with some new ideas, and revolutionized North Atlantic ship building.

Before Hawkins, the ship designer would carve small (not scale) model and the ship was built by reference to the model. Starting with Hawkins and Baker, plans were drawn on paper with careful measurements and curves were plotted according to mathematics (and inspired by predatory fish).

So, to answer your question, the art of shipbuilding was an oral lore handed down from master to apprentice until the late 16th century, when John Hawkins and Mathew Baker turned it into the science of navel architecture.

Hawkins made a lot of other changes, but that is a different story. :-)

This answer obviously comes from a class and economistic perspective, don't ask for cites because I'd need to spend four weeks or more researching to give you an "encyclopaedia" grade answer, let alone a genuine research answer.

1628 is prior to the establishment of scientific hydrology, or bourgeois controlled militarisation of hydrology under state contract. The probable issue being gestured towards is a failure to mesh between the person acting (effectively) as naval architect and the master craftsmen; or, amongst master craftsmen themselves.

1628 is well before the bourgeois attempt to colonise the knowledge structure of the 3rd Estate generally (ie: craft and trade knowledges).

[In part the circumstances of the accommodations of the Dutch and English bourgeoisie in their capitals and ports with the remainder of the 3rd estate and the localism of knowledge and production is probably a factor here. Conscious control of shipbuilding, outside of Absolute Monarch interest, was rare, ships were build individually and to order, and then abused heartily. Dutch constructions and English constructions even as early as 1628 emphasised different structural characteristics in naval architecture due to the "home waters" of each (more or less) protestant city differing, but at the same time Holland's city had higher fluidity than London, leading again to different emphases in early modern naval architecture].

Not the answer you're looking for? Browse other questions tagged england naval 17th-century construction or ask your own question.

34
Why were British ships not of the same quality as French and Spanish ships until the latter part of the 18th century?

37
What is the oldest building in the world still in use?
13
Has the U.S. Navy ever commissioned the building of a warship overseas?
5
Why was the Old Wardour Castle not demolished after the English Civil War?
10
How extensive was the slighting of castles in the English Civil War?
5
Which English ship was in Kamchatka in 1793?
13
Have any artifacts or archaeological remains from the White Ship disaster of 1120 ever been recovered?
2
What were English 'rules restricting marriage'?
10
How did (riverine) toll castles operate?
4
What was the fastest coal-powered ship in a country's navy?