Where did the demand for textiles during the industrial revolution come from?

A lot of the technological developments in the early-ish industrial revolution in Britain were about increasing the rate and efficiency of textile manufacture. It's easy to find material about what these innovations were and who was responsible for them, but in order for it to have all been worthwhile there must have been an enormous (or at least increasing) unmet demand for textiles.

It seems to be hard (at least on a cursory first glance by a non-expert) to find anything about the demand side of the story - I would like more details about it. For example: Why was there such a huge unmet demand for textiles during that time? What were the main uses of the cotton and wool fabrics that were being produced? (E.g. was it mostly clothes or were there major industrial uses as well?) Were they mainly being consumed domestically or abroad, and if the latter, where? Did the demand for textiles greatly increase before or during the industrial revolution, or had the textile market always been limited by production capacity?

With its superior productivity, industrialised textile production swept away traditional industries both domestic foreign through sheer price advantage. As a basic necessity of human life, clothing has always held potential for mass consumption. For most of history however, this potential was resolutely held back by price. That clothing were distributed in wills testifies to the fact that pre-industrial peasants were rarely able to afford new clothes.2 Industrialised mass production of clothing removed this barrier to consumption by dramatically lowering the prices.

In addition to existing demand however, the enormous growth in British textile production was enabled by her extensive export markets, principally in Asia. Specifically, India and China, the two most populous markets in the world. By the time of the Industrial Revolution, India had largely succumbed to British rule and was a prime destination for British exports.

Initially, British textiles fared poorly in China. Traditional Chinese textile production was largely performed at the household level, by wives and daughters in their spare time. This mode of production efficiently utilised labour resources while suppressing costs. The resulting high productivity of household manufacturing was such that as late as the 1820s, decades after the Industrial Revolution had begun, China was still exporting substantial amounts of textile to Britain.

As the Industrial Revolution proceeded however, British industries slashed production costs and achieved price competitiveness in China. By 1860 the price of yarn had plunged to 1/16 of its price in 1779.4 Chinese households in cotton producing provinces continue to clothe themselves, however the market became thoroughly dominated by foreign clothing. The reversal of fortunes can be observed from the textile import/export figures at Canton, the chief port of Chinese trade at the time: 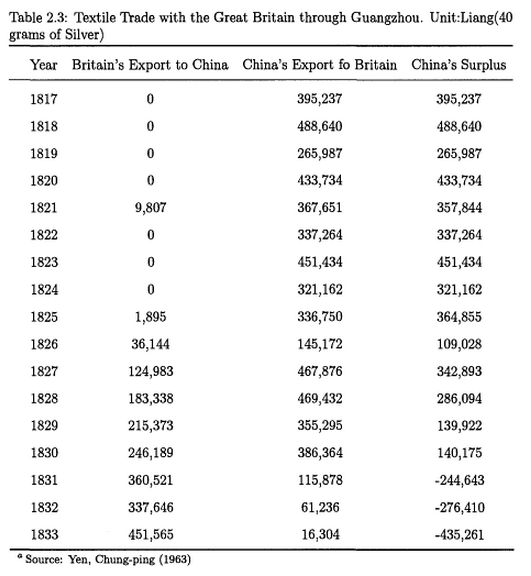 Even in 1800, the population was China had reached 260 million. The Indian population was lower, but estimates are still as high as 200 million. The two great markets had heretofore produced much of the manufactured goods of the world, including textiles, in order to feed their enormous domestic demand.

The Industrial Revolution changed all this by giving British textile production (and other industries) an competitive edge. In doing so, British industry supplanted native production, taking for itself their lucrative domestic market of literally hundreds of millions. At the same time, mass production had sparked an era of mass consumption at a level that had never been possible before due to much lower prices.

The same pattern, albeit on a smaller scale, was essentially repeated everywhere British mercantile power acquired free access - at least until the rise of competition. The combined results are that, for over a century, the rapid growth of the British textile industry was sufficiently absorbed by a seemingly insatiable market.

Not the answer you're looking for? Browse other questions tagged economy united-kingdom trade industrial-revolution or ask your own question.

37
Why did the United Kingdom industrialize first?