In Herodotus, Book II, there is the following passage:

The pillars which Sesostris of Egypt set up in the various countries are for the most part no longer to be seen extant; but in Syria Palestine I myself saw them existing with the inscription upon them which I have mentioned and the emblem. Moreover in Ionia there are two figures of this man carved upon rocks, one on the road by which one goes from the land of Ephesos to Phocaia, and the other on the road from Sardis to Smyrna. In each place there is a figure of a man cut in the rock, of four cubits and a span in height, holding in his right hand a spear and in his left a bow and arrows, and the other equipment which he has is similar to this, for it is both Egyptian and Ethiopian: and from the one shoulder to the other across the breast runs an inscription carved in sacred Egyptian characters, saying thus, "This land with my shoulders I won for myself." But who he is and from whence, he does not declare in these places, though in other places he has declared this. Some of those who have seen these carvings conjecture that the figure is that of Memnon, but herein they are very far from the truth.

Is there any indication of what these monuments might be or whether they still exist in the places Herodotus describes?

With help from user4419802's answer I have found pictures of at least two of these monuments. The first (in Palestine) is at Nahr el-Kalb north of Beirut: 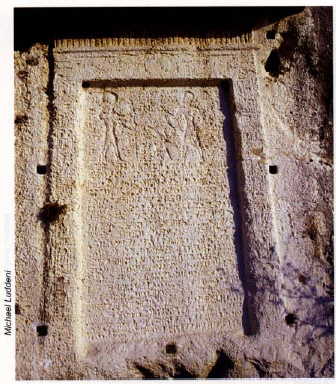 The other, known as the Karabel relief, is of the Hittite vassal king Tarkasnawa of Mira: 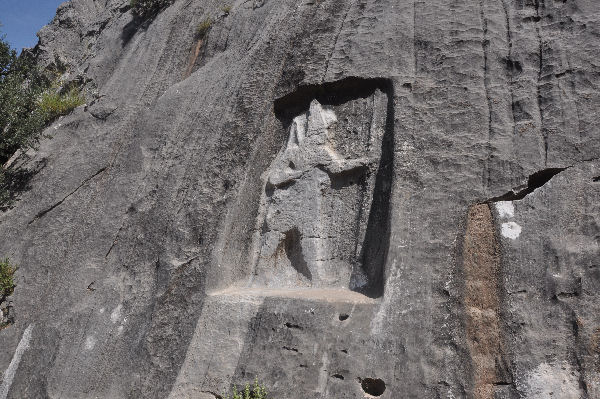 Moreover, I had not then made the important discovery of the Hittite origin of the sculptures and inscriptions photographied or copied by Perrot and others at Eyuk and Boghaz Kioi (the ancient Pteria) on the Halys, at Ghiaur-Kalessi near the villages of Hoiadja and Kara-omerlu, 9 hours to the south-west of Angora (Ancyra), at a spot which commands the old road by Gordium from Ancyra to Pessinus, and above all at Kara-bel in Lydia, at the junction of the two roads from Ephesus to Phokaea and from Smyrna to Sardes, where in 1879 I had the satisfaction of finding a Hittite inscription accompanying one of the two figures supposed by Herodotus (ii. 106) to have been portraits of the Egyptian Sesostris.

Not the answer you're looking for? Browse other questions tagged ancient-egypt monument or ask your own question.

9
Why weren't the Egyptians attacked on sight in the ancient Battle of Megiddo?
2
Who were the Hermotybians and Calascirians mentioned as making up the warrior caste of Egypt by Herodotus
9
What were the Ethiopians doing in Xerxes' army?