Were there Muslims in 12th century England?

Ever since the 1984 ITV adaptation of Robin Hood, the addition of a Muslim warrior to the band of Merry Men has been a staple of the mythology. From a storytelling perspective, the benefits are clear: the Muslim/Western tension provides a modern resonance, and the character itself provides a valuable outsider's perspective on life in 12th century England.

But getting a Muslim warrior to England always seems to require a lot of effort on the part of the writer. 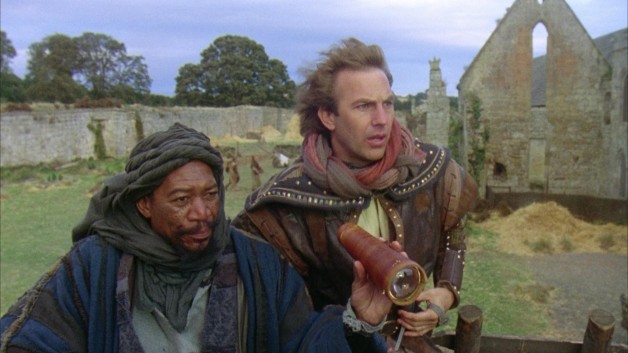 There is almost no direct historical evidence that openly-practicing Muslims were LIVING in the British Isles in the decades and centuries after the Norman Invasion. But I guess I'll start this post by highlighting the one prominent fringe hypothesis that would say otherwise (note that I mean hypothesis in a loose scientific sense here, as in a well-researched conclusion that has not gained widespread acceptance). The geneticist and demographer Donald Yates in The Early Jews & Muslims of England & Wales claims that he has discovered distinct pockets of Muslim patrilineage among UK citizens in Wales and Lincoln. According to Yates, these individuals possess the "right" North African genetic markers and surnames to surmise that they are descended from 9th-11th century Moorish merchants. However; Yates is the only resource out there making this claim and it is such a recent one (2014) that there hasn't been a lot of outside investigation by historians that would confirm this conjecture.

On the other hand, the historical record is full of examples of English-Islamic cultural exchanges going back as far as the 8th century. Note that we can't necessarily assume that these cultural exchanges were a product of Muslim traders coming to Britain (many Islamic ideas about science, trade, and jurisprudence came to Britain via contact with the Normans), but the influence was nevertheless significant. Examples include when Offa, the 8th century King of Mercia, ordered the minting of gold coins designed to resemble the dinars of the Abassid Caliphate. The reason for doing so was to apparently facilitate Mercian traders venturing to Muslim Spain and southern France. How about another example: Islamic geographers from the 9th century included Britain on their maps. Also, starting around the time of the Third Crusade, if not earlier, the Latin-translated works of highly-regarded Muslim scholars were also making their way to England and being studied by intellectuals of the period (see writings of Roger Bacon and Chaucer).

As far as hard population numbers and primary source documentation of a permanent Muslim presence in England, you won't get that until the Elizabethan period I'm afraid. For various reasons, these folks also tended to be native English who converted (save the Ottoman diplomatic delegation to the Court of Elizabeth), so it's doubtful they "stood out on the street". Good luck in your search.

Since the background of the Robin Hood legend is, in most cases, based on the events surrounding the Third Crusade (1189–1192), the intoduction of the Saracen (as Muslims were called then) character Nasir in the Robin of Sherwood series is very straightforward and plausible:

So it would seem that the British screenwriter Richard Carpenter invested some time to do some research, which is one reason why British series tend to be of a higher quality than their US counterparts.

The motivation to bring back the Muslim prisoner may have been to serve the feudal Lord as a warrior and therefore could very well have had a high standing.

Since England was a feudal society at the time, a prisoner of feudal Lord would probably not be in danger of arrest for just looking weird?

A feudal Lord enforced the Kings (or his own) will

So it is unlikely that a commoner would ask a servant of a feudal Lord to arrest a prisoner (likely a warrior himself) of that feudal Lord.

Robin Hood is a legendary heroic outlaw originally depicted in English folklore and subsequently featured in literature and film. According to legend, he was a highly skilled archer and swordsman. In some versions of the legend, he is depicted as being of noble birth, and in modern retellings he is sometimes depicted as having fought in the [Third] Crusades before returning to England to find his lands taken by the Sheriff.
...
Through retellings, additions, and variations, a body of familiar characters associated with Robin Hood has been created. These include his lover, Maid Marian, his band of outlaws, the Merry Men, and his chief opponent, the Sheriff of Nottingham. The Sheriff is often depicted as assisting Prince John in usurping the rightful but absent King Richard, to whom Robin Hood remains loyal.

Cast and characters - The Merry Men
...
Nasir (Mark Ryan)
A Saracen assassin, he was captured in Palestine by the Baron de Belleme and brought back to England to work as his henchman. After the Baron is killed by Robin, Nasir – having found respect for Robin during a crucial sword fight – decides to join the Merry Men. Throughout the series, he speaks very little.

Saracen is a despective term widely used among Christian writers in Europe during the Middle Ages to refer to Arabs and Muslims. The term's meaning evolved during its history. In the early centuries of the Common Era, Greek and Latin writings used this term to refer to the people who lived in desert areas in and near the Roman province of Arabia Petraea, and in Arabia Deserta. In Europe during the Early Middle Ages, the term came to be associated with tribes of Arabia. The oldest source mentioning the term Saracen dates back to the 7th century. It was found in Doctrina Jacobi, a commentary that discussed the event of the Arab conquests on Palestine.

By the 12th century, Saracen had become synonymous with Muslim in Medieval Latin literature. Such expansion in the meaning of the term had begun centuries earlier among the Byzantine Greeks, as evidenced in documents from the 8th century. In the Western languages before the 16th century, Saracen was commonly used to refer to Muslim Arabs, and the words Muslim and Islam were generally not used (with a few isolated exceptions). The term became gradually obsolete following the Age of Discovery.

Personally, I always hate it when a TV or movie producer takes some famous book and makes major changes to it, like adding a totally new character. Like hey, if you didn't like the story, write your own. Don't put your words into someone else's mouth just so you can piggyback on his popularity. There was certainly no such character in the original Robin Hood story. Whether this really is or will become a "staple of the mythology", we'll see I guess. But that little rant aside ...

To make a Muslim character living in England plausible, you don't have to suppose any large community of Muslims establishing a permanent residency in England. You just have to posit that ONE person could have made it there. And that seems pretty obviously possible. Others have noted that Muslims did visit England and trade with England in this period. You just have to suppose that among the hundreds(?) thousands(?) of Muslims who visited, one decided to hang around and join this particular group.

17
Why were universities created in the 11th-12th century?
7
When were the heresy laws abolished in England?
8
Is there any evidence for dual-wielding in the 12th Century?
4
What were the Jurchen tribes/confederations in the 11th-12th centuries?
7
Diaries or writings of Cathar Perfecti in 12th Century France
14
Was there a rule against non-Muslims wearing the colour green in the Ottoman empire?