What did early humans do with their long hair? [closed]

What did early humans do with their hair? Surely once it got too long it would've become a hindrance, obscuring vision as well as getting caught in plants.

Did they do anything to manage it or not?

Our ancestors started using tools well before there were humans. They have had cutting tools for about 2 million years produced by various means and sharp enough to cut hair. Whether they used them to cut hair, I don't know.

Human hair does not stop growing, but it does fall out after a certain period of time with a new one replacing it. The ultimate length of human hair is determined by how fast it grows, how long it takes before falling out, and whether it's curly or straight.

Left unkempt, many humans do not grow long straight hair. If they did, they probably braided it. Basic combs appear in the Neolithic era.

In addition to Schwern's answer, it should be pointed out that not all humans grow beards and long straight hair. The Khoisan peoples in Africa instead grow sparse curly short hair (often termed "peppercorn"), and no beards at all. They don't need haircuts or shaves. 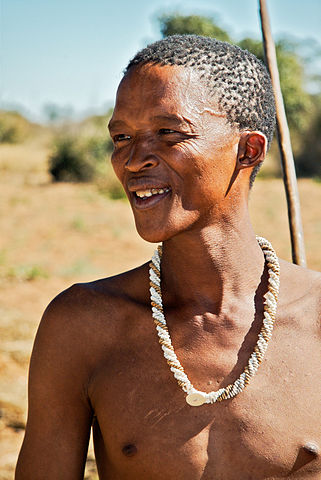 Their natural range (prior to the Bantu expansion) included the area in East Africa where humans are thought to have evolved. So it seems quite possible (likely even, if you believe in coincidental evolution) the original humans had some kind of similar hair scheme, and thus didn't need to cut their hair or shave.

It further seems likely that long straight evergrowing hair and beards are human adaptations to colder climates, and would not have evolved the way they have without the ability to trim them.

12
Did iron age Britons still use the "ritual" sites built by their neolithic predecessors?
6
What caused women to lose their access to resources and become a part of men's possessions with the start of the agriculture era?
15
What are early archeological clues of humans boiling food?
28
Why were there no agricultural, city-state forming civilizations in the Ice Age?
3
Did humans hunt with dogs before planting crops for food?
1
What were the characteristics of the earliest varieties of European cattle, "bos tauros", and how were they kept?
4
Did the Yamnaya have a particular breed of dog? Did that breed spread with them?