Did Ancient Rome use lead styli?

Is wikipedia correct to say:

The original form of "lead pencil" was the leaden stylus used by the ancient Romans, who also used it to write on wood or papyrus by leaving dark streaks where the soft metal rubbed off onto the surface. The concept has been revived in recent times as the core of the "inkless pen": a lead-based metal alloy that leaves dark markings on paper by abrading small pieces of core onto the surface.

I cannot find any good google results, and this Wikipedia article contains zero citations. I also question the physically possibility; Lead is soft, but the idea that you could write with it seems absurd.

If so, is this why they thought graphite was lead, as graphite is also good for writing with?

This question is a bit tricky. Mundane every day facts like descriptions of writing tools tend to be poorly documented because most people find them uninteresting.

However, first to disabuse you of the idea that lead can't write. Have you ever handled lead yourself? It is remarkably soft and malleable, and easily makes marks on hard surfaces, although not nearly as easily as graphite. I'd encourage you to find some yourself, except it might be tricky - you may need to look for a tradesman, a scrap yard, although it might be illegal where you live... plus it is mildly poisonous. Instead I'll just point to the existence of metalpoint, a traditional drawing technique where a soft metal like silver or lead is dragged across an abrasive surface:

Metalpoint is a drawing and writing medium that dates from antiquity and was particularly popular from the 14th century to the beginning of the 16th . The technique of metalpoint involves dragging a stylus of metal across a substrate prepared with a slightly abrasive surface coating, or ground. As the metal is drawn along the surface, tiny particles of metal are left behind, creating a mark.

Metalpoint Drawing: The History and Care of a Forgotten Art

Albrecht Durer did many drawings in silverpoint, such as this one: 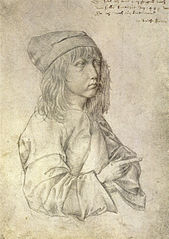 As for whether lead styluses were used in ancient Rome, to write in this form, is a bit uncertain:

So did ancient Romans use leaden stylus-shaped instruments to write, in the manner of leaving lead marks? Unfortunately I couldn't find good sources, but there are these:

So was lead used to write in ancient Rome? Most likely. Did they use lead pencils? It's uncertain, but not unreasonable.

Not the answer you're looking for? Browse other questions tagged ancient-rome technology writing or ask your own question.